There is good news from BMW Group Malaysia as it revealed revised prices for several models as a result of savings from local assembly and EEV (Energy Efficient Vehicle) incentives. The all-new BMW X1 and BMW X4 are assembled in Kedah and mark the ninth and tenth new models to join the portfolio of vehicles assembled in Malaysia while three models join the BMW 1 Series and 3 Series in receiving EEV status.

Officiating the launch of these models, Yang Berhormat Dato’ Seri Ong Ka Chuan, Minister II of the Ministry of International Trade and Industry (MITI) said, “We at MITI are pleased that the BMW Group has continued its commitment and investment to make Malaysia a strategic hub for them in the region.”

Mr. Han Sang Yun, Managing Director and CEO of BMW Group Malaysia, meanwhile, said, “The new locally-assembled BMW X1 and BMW X4 are a further testament to our longstanding investment and commitment to Malaysia as a strategic hub for the BMW Group in the South East Asian region. Overall, the BMW Assembly Plant in Kulim now assembles over 20 variants of BMW and MINI vehicles in the country.”

Mr. Han further added that earlier in 2016, the premium automaker revised its pricing strategy for variants of the BMW 1 Series and BMW 3 Series lower by up to 8% as the vehicles received its Customised EEV Status Incentives.

“Today, I am pleased to announce that we have now received similar incentives for the BMW 3 Series Gran Turismo, BMW X3 and BMW 5 Series. We will be extending this benefit by the Malaysian government to our customers and we will be revising the prices for the vehicles lower by up to 9%.”

BMW Group Malaysia also announced that in 2018, Malaysia would become the export hub for the BMW 3 Series, BMW 5 Series and BMW 7 Series variants to Vietnam and the Philippines. Mr. Han said, “Malaysia continues to be a strategic hub for the BMW Group in South East Asia and we at BMW Group Malaysia are pleased to be able to raise our compentency here to assemble and export these premium vehicles to emerging markets in the region to grow our capabilities in the ASEAN region.” 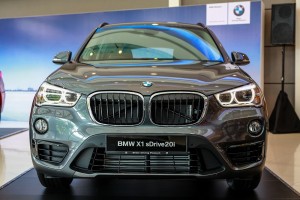 The new locally-assembled BMW X1 is driven by a 2.0-litre engine with BMW TwinPower Turbo technology delivering a maximum output of 192 hp and peak torque of 280 Nm. Its instantaneous pulling power enables an acceleration of 0 to 100 km/h in 7.7 seconds and a top speed of 225 km/h. The average fuel consumption is 5.9 litres per 100 kilometres, while C02 emissions stand at 136 grams per kilometre. The impressive figures are combined with BMW EfficientLightweight and sophisticated aerodynamics to further minimise drag and increase the exemplary fuel efficiency of the new locally-assembled BMW X1. 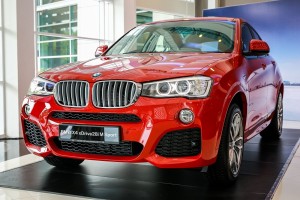 Meanwhile, the new locally-assembled BMW X4 with a 2.0-litre four-cylinder petrol engine with BMW TwinPower Turbo technology producing  an astounding output of 245 hp and peak torque of 350 Nm. Paired with an eight-speed Steptronic transmission, it accelerates from 0-100 km/h in just 6.4 seconds. These figures are combined with an average fuel consumption reading of 7.3 litre per 100 km and CO2 emissions level of 169 grams per kilometre.

The New BMW 5 Series, the world’s most successful premium business car, now receives added equipment as standard. The new equipment offering now includes the M Sport Package, Comfort Access, Sports Seats for Driver and Front Passenger as well as the latest industry leading BMW ConnectedDrive offering as standard across its variants of the BMW 520i, BMW 520d and BMW 528i. 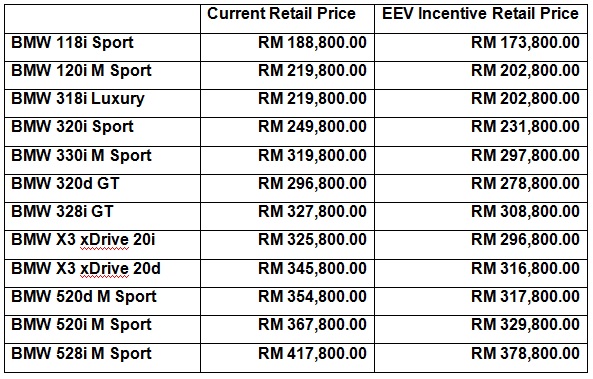