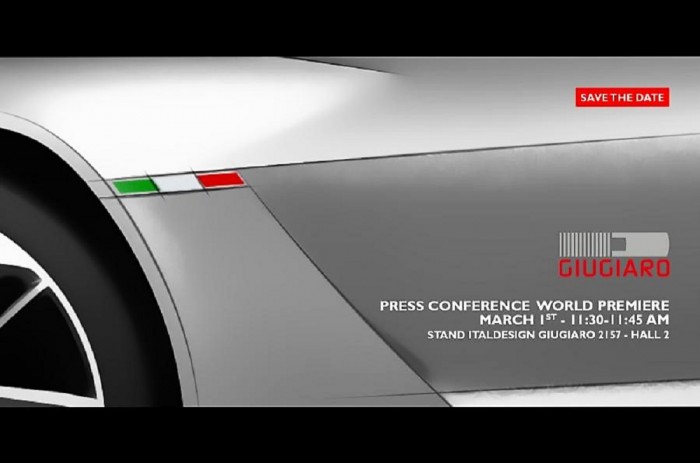 A teaser was sent out by well-known Italian design house, Italdesign Giugiaro, ahead of the 2016 Geneva Motor Show, asking to save the date – March 1st.

While the teaser is only a rendering, we can see bits of the character lines and curves and think it will be of the sporty persuasion; Italdesign’s current design boss is Felippo Perini, former design chief at Lamborghini. The Italian ‘tricolore’ badge also likely hints at a more classic design approach.

The GEA concept revealed by Italdesign at the 2015 Geneva Motor Show was a super luxurious autonomous vehicle with gigantic 26″ wheels and 4 electric motors, so the new concept could feature some sort of unconventional powertrain.

As an aside, Italdesign Giugiaro was 90.1%-owned subsidiary of Lamborghini (itself a subsidiary of Audi) since 2010 until the middle of 2015 when founder Giorgetto Giugiaro sold his remaining shares to Audi.