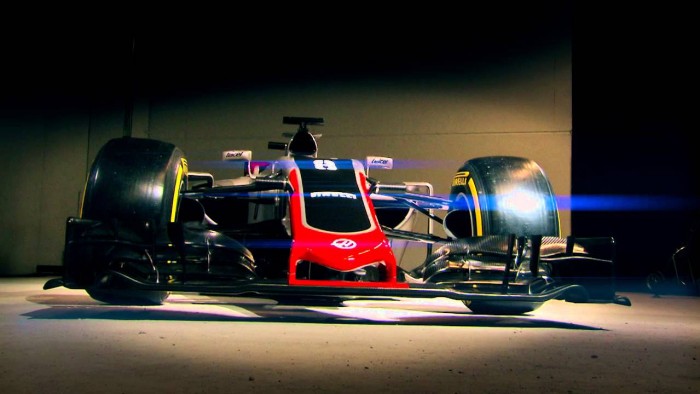 The cover has been taken off the VF-16, Haas F1 Team’s first racecar. Haas F1 is the first American-owned team in Formula One since the mid-1980s when the last American team raced – Haas Lola (no relation at all to the current Haas) and the first complete newcomer to the sport since 2010.

The name “VF-16” is built on the first CNC machine manufactured by Haas Automation in 1988 called VF-1. “V” stands for vertical which is an industry standard designation for a vertical mill. Gene Haas, founder of Haas Automation, added “F1” to the machine’s name to unofficially designate it as the company’s “Very First One”. Gene Haas is the co-owner of the successful Stewart-Haas team in NASCAR Sprint Cup series.

Haas F1 Team was given an entry into the 2015 season but decided to defer to 2016 to allow for more development time. It has a technical partnership with Ferrari which also supplies Haas with the powertrain.

“From an international standpoint, Formula One is the highest echelon of racing, and Haas Automation builds the highest-quality machine tools,” said Haas, who has grown Haas Automation into the largest machine tool builder in North America with more than $1 billion in annual sales. “When you hear ‘F1’ you know exactly what it is – a global racing series that showcases the latest technology and attracts the best talent in engineering and design. Haas Automation has an excellent reputation in the United States and I want that reputation to grow worldwide. Connecting Haas Automation with F1 in name and in practice is the best way to grow our business and elevate Haas Automation to a premium, global brand.”

The dark gray, light gray and red-toned livery scheme of the VF-16 is also inspired by Haas Automation’s line of vertical and horizontal machining centers, turning centers and rotary tables and indexers.

“Just as Haas Automation’s products continually evolve, becoming better and more efficient, our methodology behind the VF-16 was to make it the best evolution of a good F1 car,” said Guenther Steiner, team principal, Haas F1 Team. “We’re a new team, so we looked at what the successful teams were doing to give us a baseline of the direction we needed to go with our design.

“We have very experienced designers who worked hard to develop all the little things from an aerodynamic perspective that, collectively, add up to a lot. And our technical partner, Ferrari, provided our power unit, and that really defined the rear end of the car and how big it needed to be. Our goal with this car is to score points,” Steiner states. “First, we need to go out there and show that we can do the job, that we can finish races, that we are respected by the fans and other teams in the paddock. Then, we want to score points. That is the ultimate goal.” 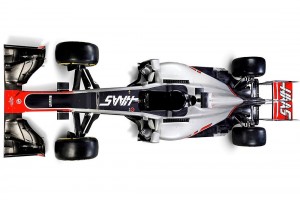 Of note is the strange hump above the front suspension which seemingly exists to accommodate the higher push-rod suspension design. Coincidentally, the 2015 Ferrari SF15-T used a pull-rod design which put the nose lower. This has led to some speculation that the VF-16 is based on the 2015 Ferrari (the engine cover side profile of the 2 do look similar); not a bad thing as the car had potential and it saves a new team like Haas a lot of resources and time. Strange hump aside, the push-rod is more traditionally used for its handling benefits while Ferrari previously decided on the pull-rod for aerodynamic gains.

At a glance, the sidepods are tightly packaged at the rear although it’s not as tight as the recently revealed Ferrari or McLaren, and there’s no obvious undercut for the ‘Coke bottle’ effect. However, it’s not uncommon for teams to launch cars that don’t reveal prominent technical features until testing or race day.

It hits the track later today for preseason testing at the Circuit de Barcelona in Catalunya, Spain, and will make its race debut at the Australian Grand Prix in Melbourne on 20th March, with Romain Grosjean and Esteban Gutierrez as drivers.

Interestingly, Richard Mille can be seen on the side of VF-16’s nose. The Swiss luxury watchmaker, who previously sponsored Lotus and the late Jules Bianchi, was recently announced as McLaren-Honda’s watch sponsor in a new 10-year partnership.