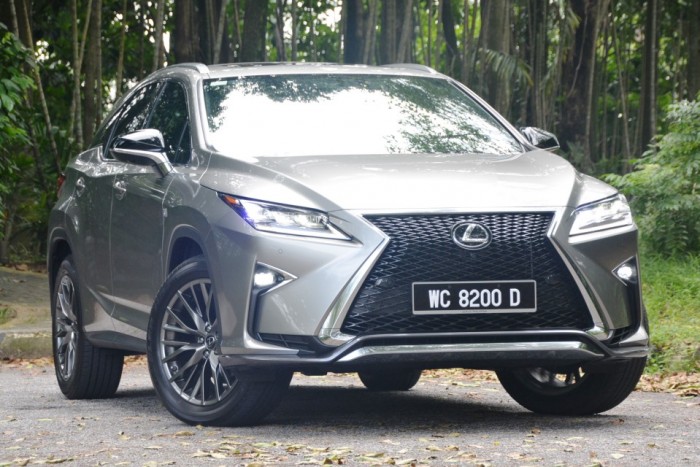 Whilst the NX and ES models currently lead the Lexus internal sales charts, the RX continues to hold vital importance to the brand’s business plans in Malaysia. Early iterations of the model, which entered our market through grey channels, were instrumental in etching awareness of the Lexus brand into the general public’s consciousness even before UMW Toyota Motor officially took up the franchise.

The all-new fourth generation RX was launched in Malaysia recently. Unlike the original model that debuted in 1998, however, the RX now arrives in a relatively crowded market place, having to taking on highly-talented opposition such as the BMW X5, Audi Q7, Range Rover Sport, and not to mention the gobsmackingly excellent Volvo XC90.

Those other premium SUVs may not be direct rivals of the RX, but they are nevertheless close enough to put Lexus’ hitherto proven recipe that has yielded 2.2 million sales globally to date through some very stern testing. 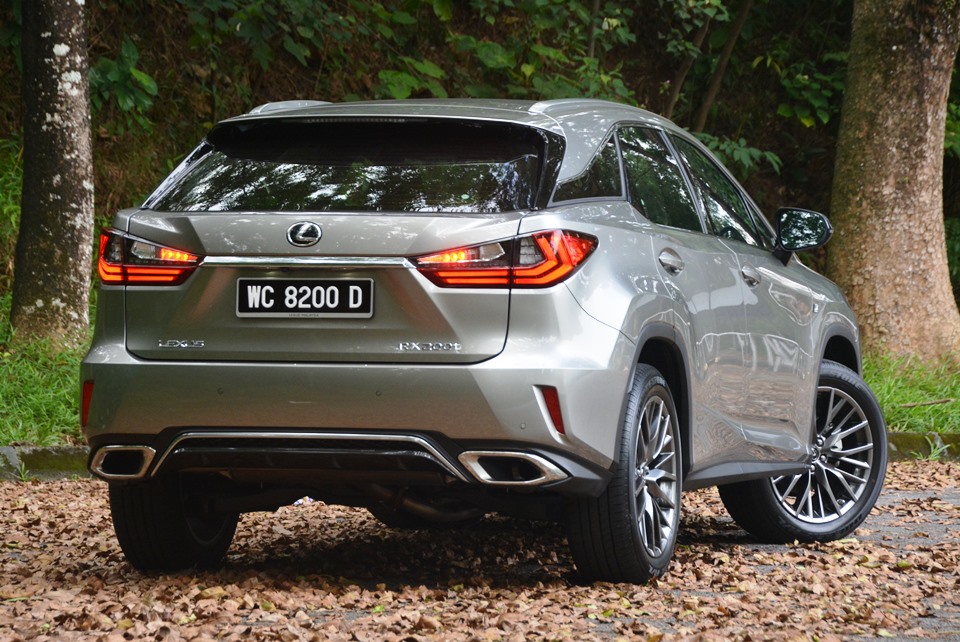 A total of six variants of the RX are on offer, all of them featuring all-wheel drive as standard. From the previous model, the 3.5-litre V6 petrol RX 350 and hybrid-powered RX 450h variants are retained, the former being offered with a choice between Luxury and F Sport trim levels.

The more interesting stuff are found at the lower half of the range, however, as the previous model’s FWD-only RX 270 is discontinued and replaced with three new variants powered by a new 2.0-litre turbo engine. Expected to be the main-selling variant, the RX 200t is available in Premium, Luxury, and F Sport trim levels. 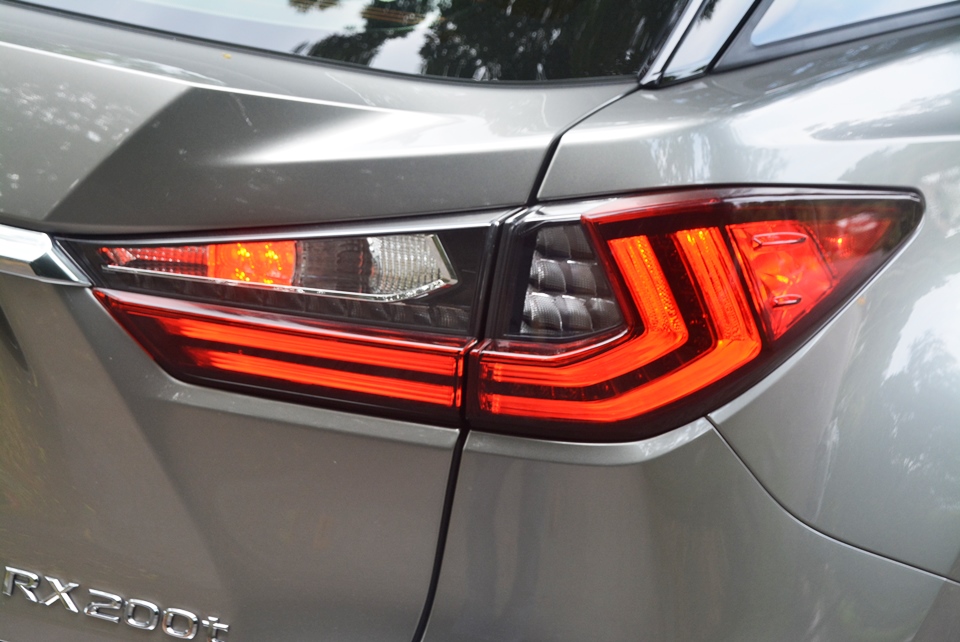 Pricing for the RX starts competitively at RM388,800 on-the-road without insurance for the RX 200t Premium, but realistically, most buyers are likely to choose between the RX 200t Luxury and F Sport variants, the latter which is the subject of our review here, at RM408,400 and RM422,990 respectively.

The bigger-engined models start at RM457,800 for the RX 350 Luxury, rising to RM486,300 for the RX 350 F Sport and RM520,200 for the RX 450h. At this price, it is difficult to argue against the RM454k XC90 Twin Engine, which has one of the most sumptuous interiors for the money, seats seven, and powered by the most advanced powertrain in the segment. 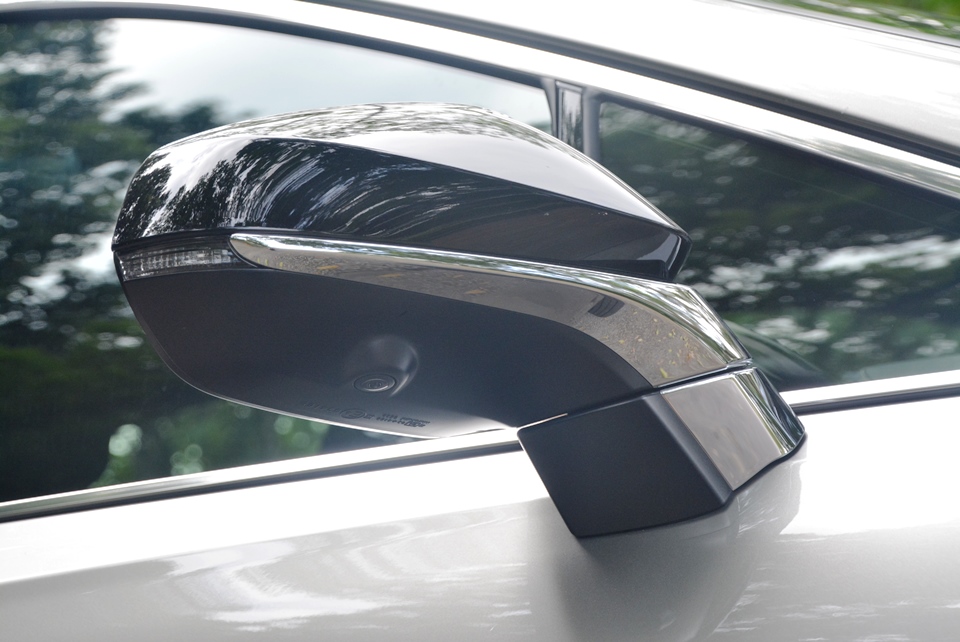 Both the RX 350 and RX 450h have V6 engines displacing 3.5 litres, the former being carried over from the predecessor. The direct-injected 2GR powerplant of the RX 350 has been updated with an all-new cylinder head designed to facilitate more efficient combustion, resulting in improved outputs of 295hp and 370Nm, up from 274hp and 346Nm previously. The extra outputs are accompanied by two additional ratios in a new 8-speed automatic transmission.

The RX 450h’s engine, meanwhile, is all-new, although the operating configuration is identical to the previous model. Up front, the completely re-engineered direct-injected V6 petrol engine contributes 258hp and 335Nm to the cause. In collaboration with an electric motor mounted in each axle, the engine works in an electronic all-wheel drive system that generates a net output of 308hp, 4.4 percent up from the previous model’s 295hp. 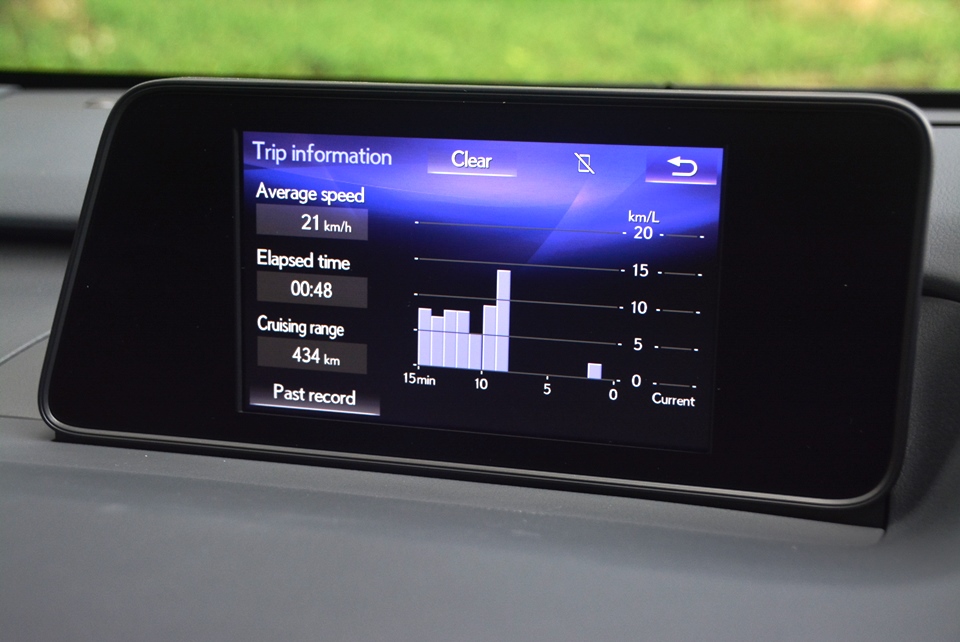 In 200t guise as tested, the RX is powered by the increasingly-familiar 2.0-litre 8AR twin-scroll turbo engine that debuted in the NX 200t earlier this year and also featured in the IS 200t. Installed in transverse configuration, the highly-advanced dual injection dual combustion cycle petrol engine produces 235hp and 350Nm, and is mated with a 6-speed automatic transmission. In longitudinal engine installations as seen in the IS, the engine is tuned to 241hp and fitted with an 8-speed auto.

As detailed in reviews of the NX 200t and IS 200t, the 8AR engine is extremely sophisticated, being able to alternate between direct and port injection as well as between Otto and Atkinson combustion cycles, giving it exceptional flexibility in being able to switch between prioritizing fuel economy and high performance as demanded by the driver. In true Toyota fashion, the engine is bench-tested for more than 10,000 hours and put through a million kilometres on the road before being green-lit for series production. 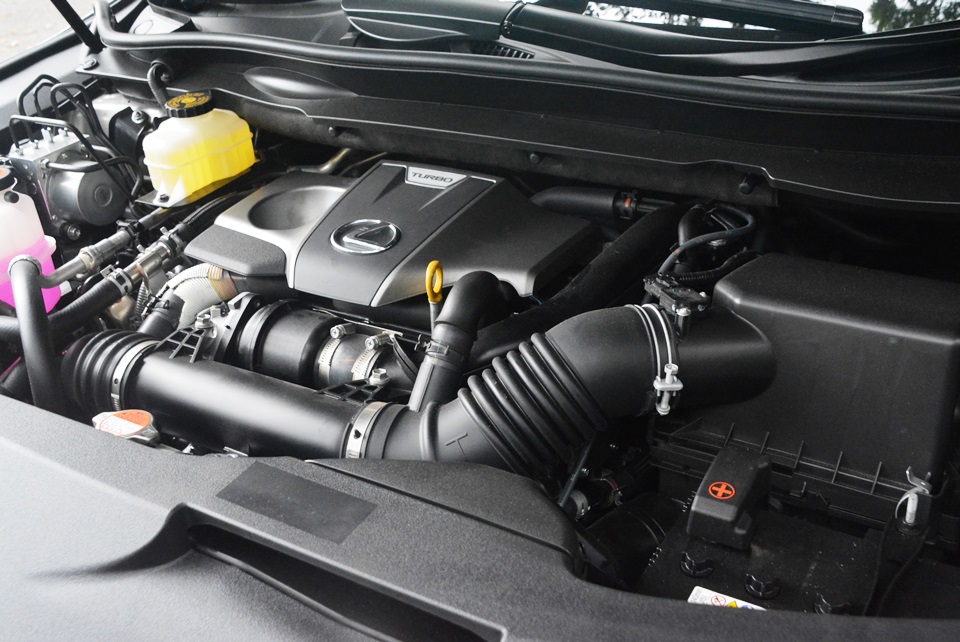 Lexus’ controversial spindle grille design was already applied to the RX when the previous model was facelifted. The current model unsurprisingly inherits that feature, although this being a new vehicle designed from ground up, it looks less like an afterthought and more integral to the vehicle’s overall appearance. In fact, compared to the previous model, it seems to be the only design element that has been given an evolutionary alteration.

Styling changes get more drastic as you move further aft with sharp and intricate creases running along its flanks. The wheel arches bulge in a chunky fashion and the glass house tapers unconventionally at the rear – it’s a love-it or hate-it design touch, but the practical impact it does have is that rear three-quarter visibility is hindered. Overall silhouette is reminiscent of the previous-gen RX, but the details are properly 21st century and gives the vehicle an appearance that reminds one of a Transformer robot.

Dimensionally, the RX has grown and it has expanded by considerable margins. There is an extra 120mm of metal work between the bumpers (4,770 to 4,890mm) and space between the axles have been stretched by 50mm (2,740 to 2,790mm). Increase in width has been capped to just 10mm (1,885 to 1,895mm) but these growths in measurements all contribute to make the RX feel appreciably bigger on the move – especially when parking. That 360-degree monitor fitted to our test car came in very handy in tight spaces. 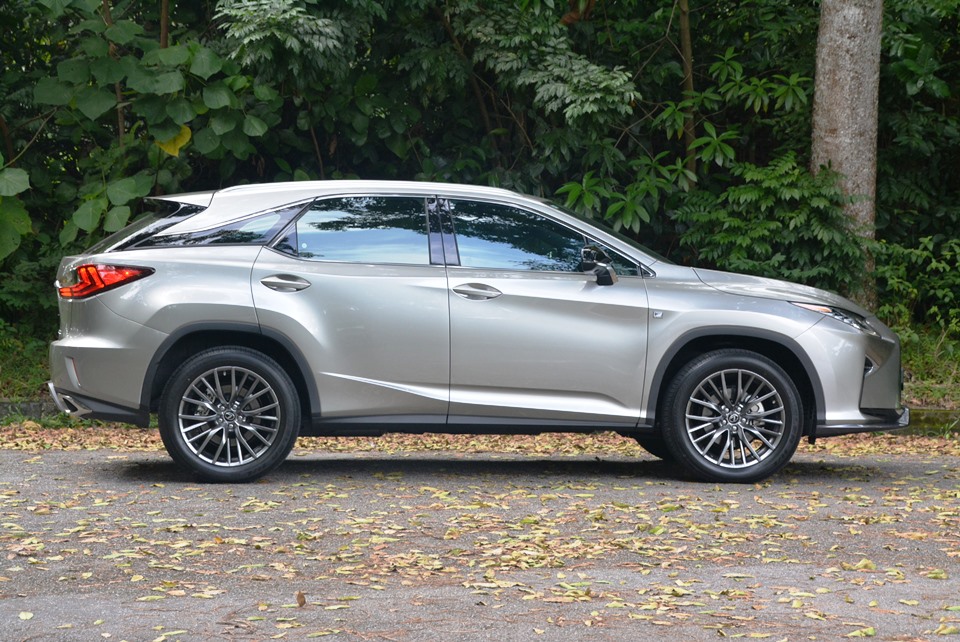 Unlike most SUVs of comparable size, the RX is not available in seven-seater configuration, not that its tapering roof line would have made for spacious third row accommodations anyway. We would, however, have appreciated a lower cargo floor for a vehicle designed from the onset to operate purely as a five-seater.

Access to the cargo hold is convenient. All variants have powered tailgates with V6 models additionally getting handsfree access – just put your palm near the Lexus emblem to activate. Expansion of boot volume is provided by 60:40 split-folding rear seat backs, which are power-operated in all variants except the base RX 200t Premium.

Overall cabin fit and finish is excellent. Unlike the IS 200t we reviewed previously, the RX’s newer cabin incorporates a plusher and more luxurious selection of materials. It feels like greater effort has been expended to differentiate this from a Toyota’s interior. We are still not fans of Lexus’ infotainment system interface though, too fiddly and unintuitive to operate compared to the rotary dial setup favoured by most other rivals. 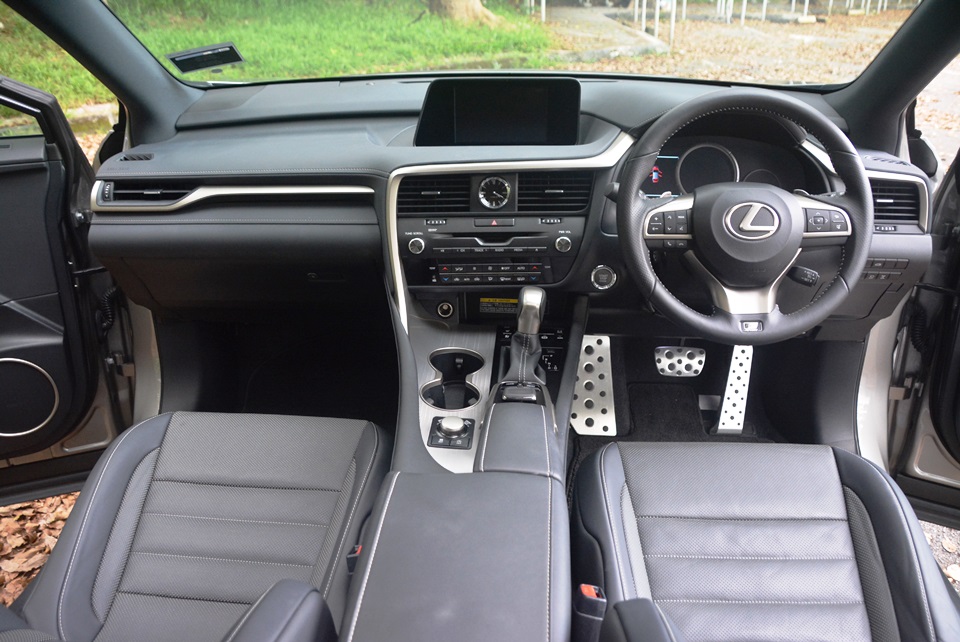 Lexus may be playing catch up with the Europeans in the turbocharging game, but evidence from the NX and IS suggest that the new 8AR engine is fast making up lost ground on rivals. It’s smooth-revving and well up to the task of hauling our two-tonne-plus test car feeling neither huffed nor puffed. Our compliments go to the 6-speed automatic transmission as well for its smooth and unobtrusive shifting of cogs. We only regret that the engine does not go about its business with a more engaging soundtrack.

Handling exceeds expectations. In F Sport trim as tested, the RX suppresses body roll surprisingly well and summons commendable levels of grip as you power it around apexes. We could do with a bit more communicativeness from the controls; feedback through the steering is almost non-existent and its weight can be at times inconsistent. No denying its a finely-balanced chassis though. 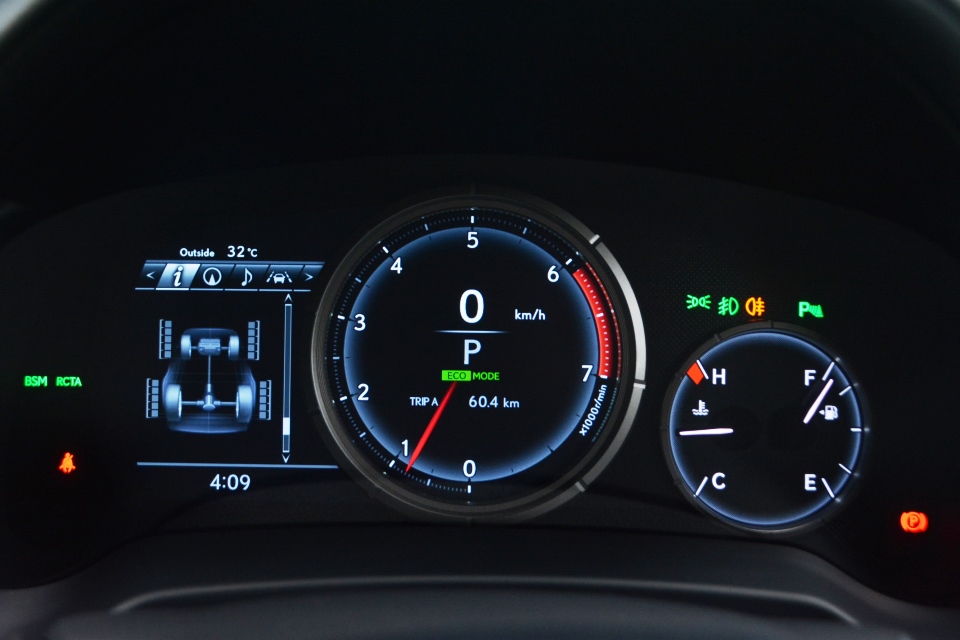 That surprising handling sharpness comes with some pre-requisite compromises, however. Non-mechanical noises, namely wind and tyres, are higher than what we expect from the brand, and ride quality is also not as pliant as we would have liked. Whilst low frequency undulations are well ironed-out, sharper disturbances do catch the sport-tuned adaptive suspension out, even in its most comfort-oriented setting.

It is easy to suggest that avoiding F Sport trim may be a better idea to improved levels of comfort, but without testing a non-F Sport car, we cannot definitively say how much of the handling competence we experienced is retained in a Premium or Luxury trim vehicle with in passive suspension. For a car as big and as heavy as the RX, it may be a good idea to sacrifice some comfort in exchange for more sure-footed dynamics. 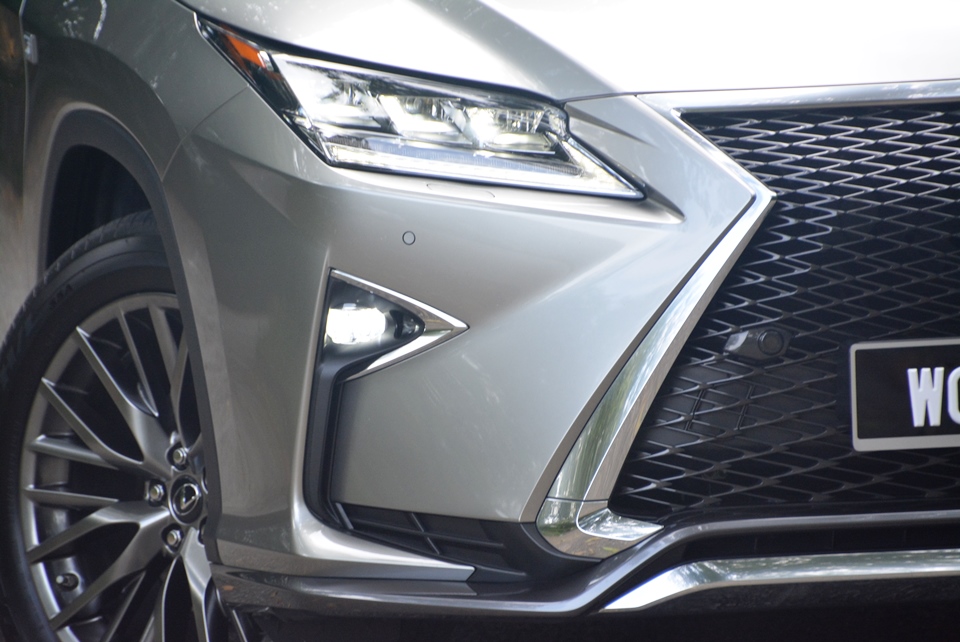 Beneath its sharper new suit and glitz of its all-new engine, Lexus has pretty much defaulted to a similar template in creating this new RX. Like its smaller NX sibling, the RX sits midway between segments – too big to compete against the BMW X3, but not quite big enough to take on the X5. Unlike the ridiculously expensive IS, however, the RX is at least priced right and appropriate for its positioning relative to other premium SUVs.

Amongst premium SUVs, the RX is therefore something of a niche product. Avoiding direct competition with the majority of other premium SUVs, the RX sits in a comfortable niche carved by its predecessor models, many of which continue to faithfully serve their Malaysian owners. Now with the new RX 200t variant, the RX’s appeal is wider than before, offering much of the same appeal as preceding RX models but with the benefits of reduced road tax from its 2.0-litre engine. 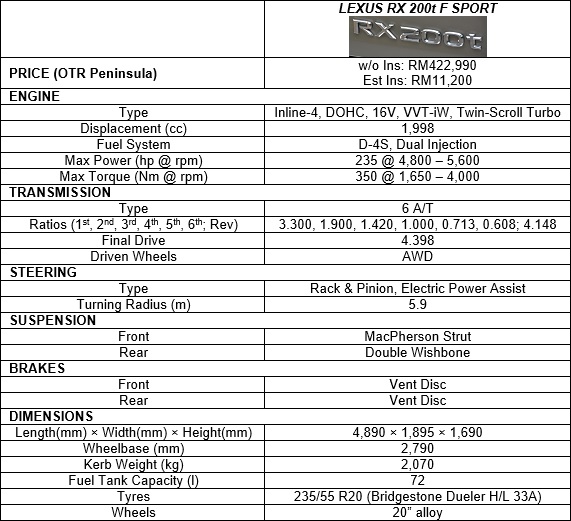