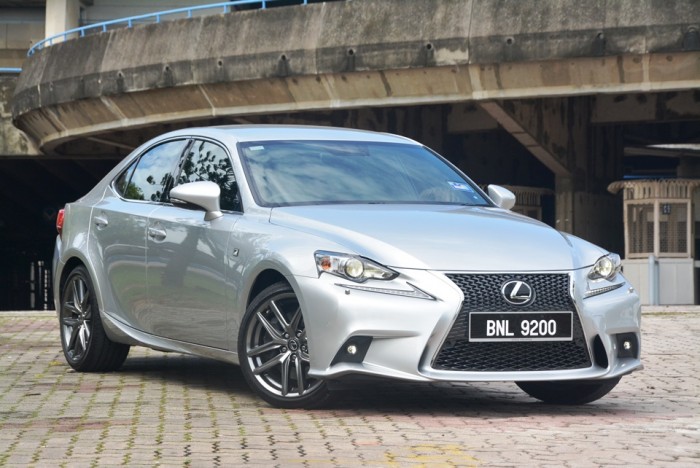 Just like the Koreans seem to be perpetually perceived as paying catch up with the Japanese in mass market segments, Lexus too seem to always be seen as being hot on the heels but never quite matching the appeal and desirability of the German rivals it seeks to pursue and surpass.

As a brand that came into being only as recently as the 1980s, Lexus does not enjoy the same long-running heritage that the German luxury marques took twice the time to develop and cultivate. All Lexus has in its relatively short existence an almost impeccable track record in consistently producing well-built cars underpinned by solid engineering integrity. 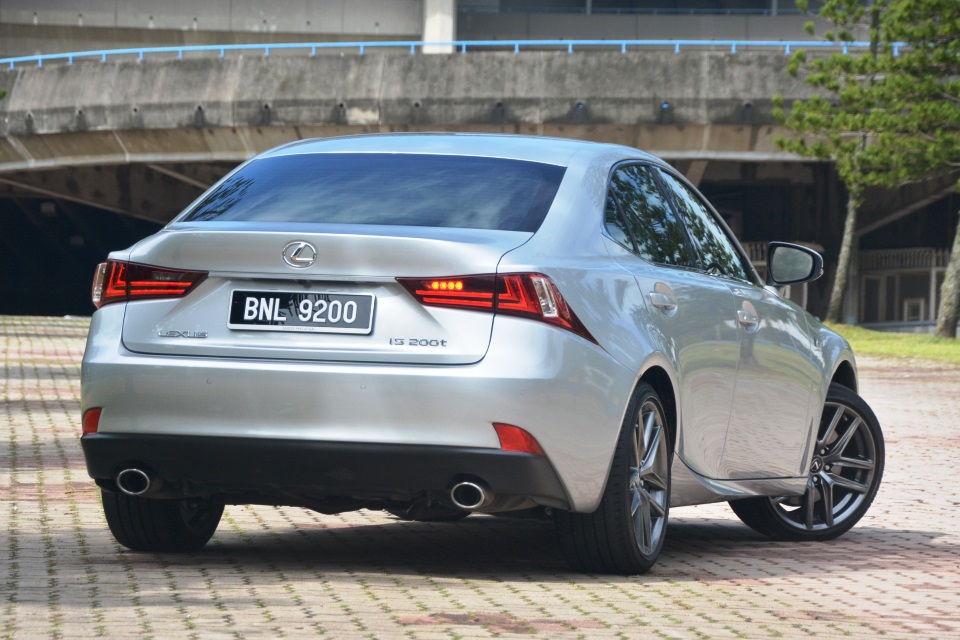 Although the company’s range of SUVs and the transverse-engine front-wheel driven ES sedan are relatively well-received, its core sedan models, those that compete directly against the Mercedes C-, E-, and S-Class as well as the BMW 3, 5, and 7 Series are notably less successful. The IS, Lexus’ compact sedan, received a full model change in 2013, but its competitiveness is hampered by an aging 2.5-litre V6 that struggles to keep up with rival 2.0-litre turbocharged powertrains in either performance or fuel economy.

The new IS 200t then, is a timely update which brings Lexus’ challenger of the 3 Series up to speed with the introduction of a new 2.0-litre turbo engine. Offered alongside the existing hybrid-powered IS 300h, the IS 200t officially replaces the IS 250. 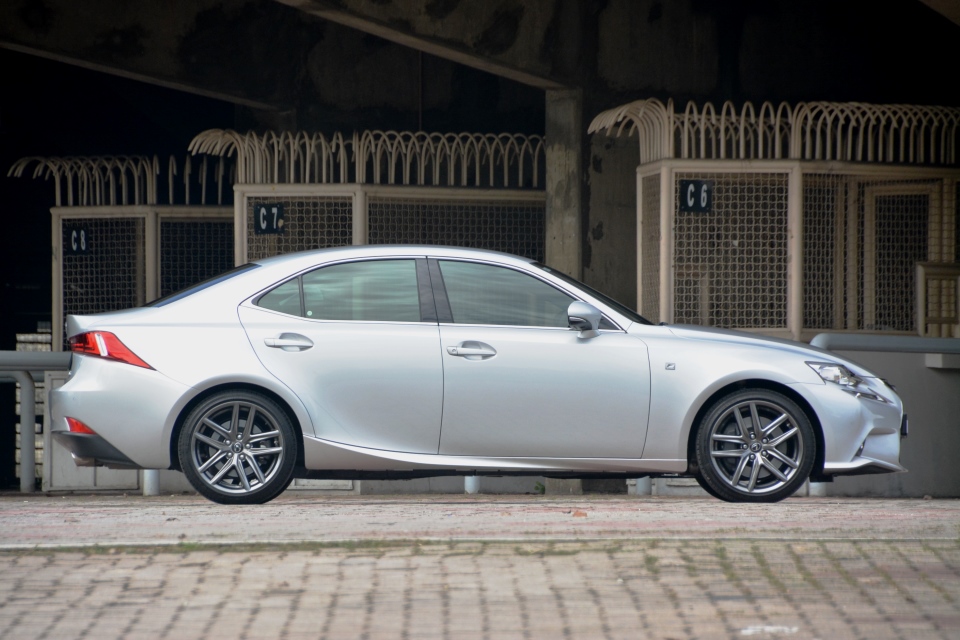 Despite coming with a downsized engine, the IS 200t unfortunately does not come with a downsized price tag. It continues to be offered with a choice of three variants like the IS 250, but prices are up by a significant quantum. The base Premium model is hiked by nearly RM30k to RM297,800; with insurance factored in, the car finds itself at the wrong side of RM300k.

Go for the higher-end Luxury and F Sport models, you’ll be asked to shell out around RM50,000 more than the equivalent IS 250, these two variants hitting the road at RM349,900 and RM384,900 respectively. The price increase is even steeper with the hybrid-powered IS 300h which, despite being largely unchanged, is asking for RM452,100, nearly RM70k more than before.

To put some perspective into Lexus’ pricing, the most affordable IS 200t is costlier than all regular variants of the Mercedes-Benz C-Class, whilst the mid-range IS 200t Luxury is undercut by range-topping variants of both the BMW 3 Series and the Audi A4. In fact, a tax-free IS 200t F Sport in Langkawi (RM241k) costs more than a BMW 320i (RM239k) with duties paid in Peninsular Malaysia. Safe to say, we are not looking at the segment’s best value buy here. 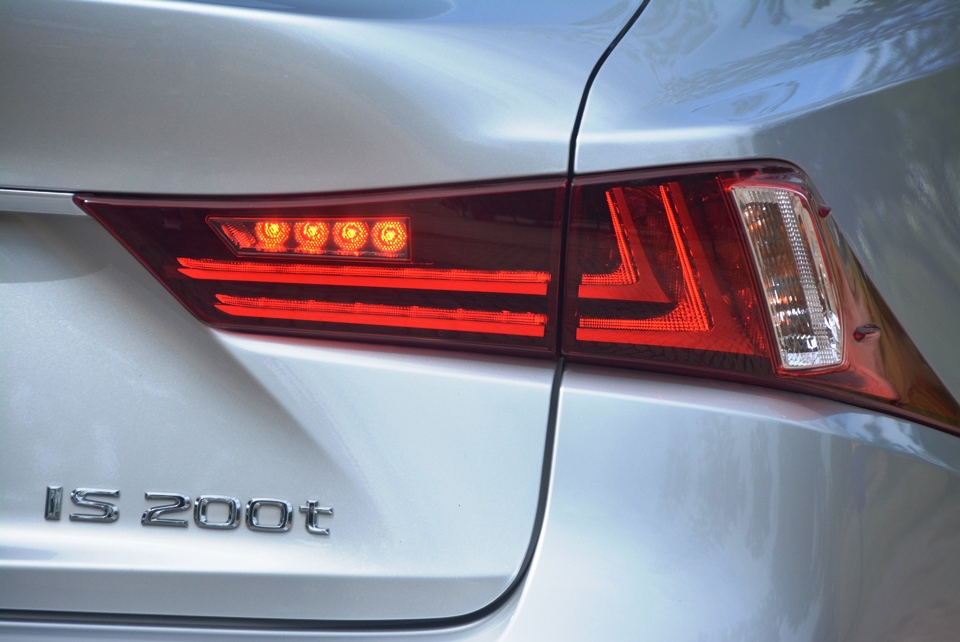 The IS 200t is the second Lexus model after the NX to be launched in Malaysia with Toyota’s all-new 8AR-FTS 2.0-litre twin-scroll turbo powertrain. It has also been introduced here recently in the all-new RX, but the IS remains the engine’s only application in our market to date to be installed in a longitudinal configuration. Unlike the transverse-engine NX which has a 6-speed automatic transmission with intelligent all-wheel drive, the IS sends power astern through an 8-speed automatic transmission.

Lexus may have been late in joining the 2.0-litre turbo party, but the company more than makes up for that delay with a high technological content imparted into the engine. It one-ups the commonly-used direct injection fuel system with an even more advanced and sophisticated D-4ST dual injection fuel system that combines the best of direct and port injection systems. Injection is split between the direct and port injectors according to engine load.

The engine also features Toyota’s very neat and slick VVT-iW valvetrain, which is able to vary the intake valve’s timing to such a degree that the engine can seamlessly alternate between Otto and Atkinson combustion cycles according to driving conditions. Unlike its German competitors, Lexus offers only one state of tune for the engine, extracting 241hp at 5,800rpm and 350Nm from 1,650 to 4,400rpm. 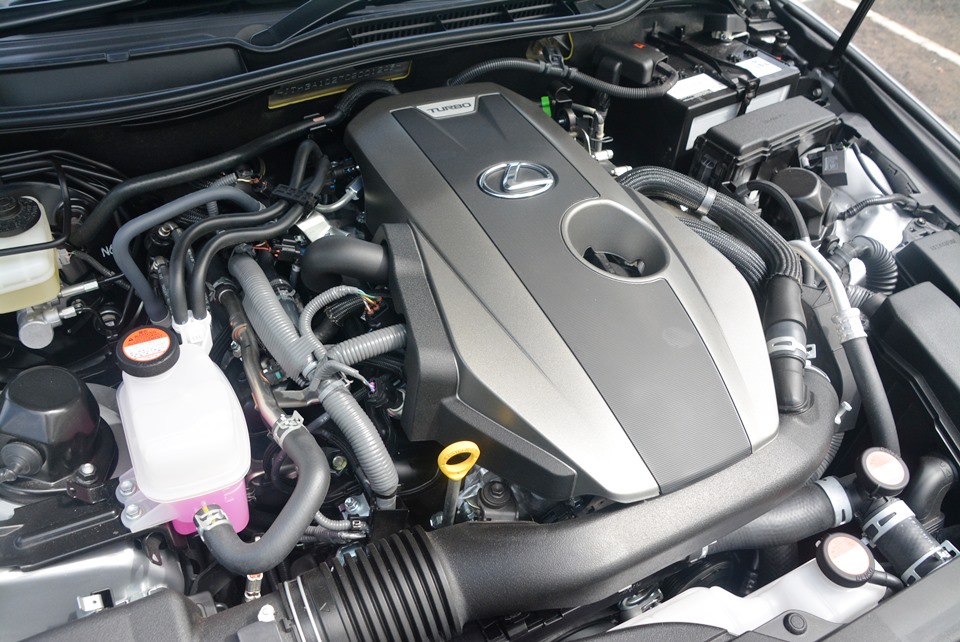 Matching the new engine’s higher performance, Lexus has accordingly beefed up the IS 200t’s brakes as well. The company claims a complete revamp of the braking system, promising improved and more linear response as a result. Brake discs, ventilated all round, are enlarged from 16 to 17 inches in diameter.

All variants of the IS 200t get a strut bar to go with its double wishbone front axle. Rear suspension utilizes a multi-link configuration, and the F Sport variant gets adaptive dampers. Rims measure 17 inches in the base model and hybrid-powered IS 300h, and staggered-width 18 inches in the Luxury and F Sport variants.

Safety has been improved too. An additional two side airbags have been placed at the rear, raising overall airbag count in the IS from eight previously to a staggering ten. All variants from the Luxury model upwards get blind spot monitoring and rear cross traffic alert. 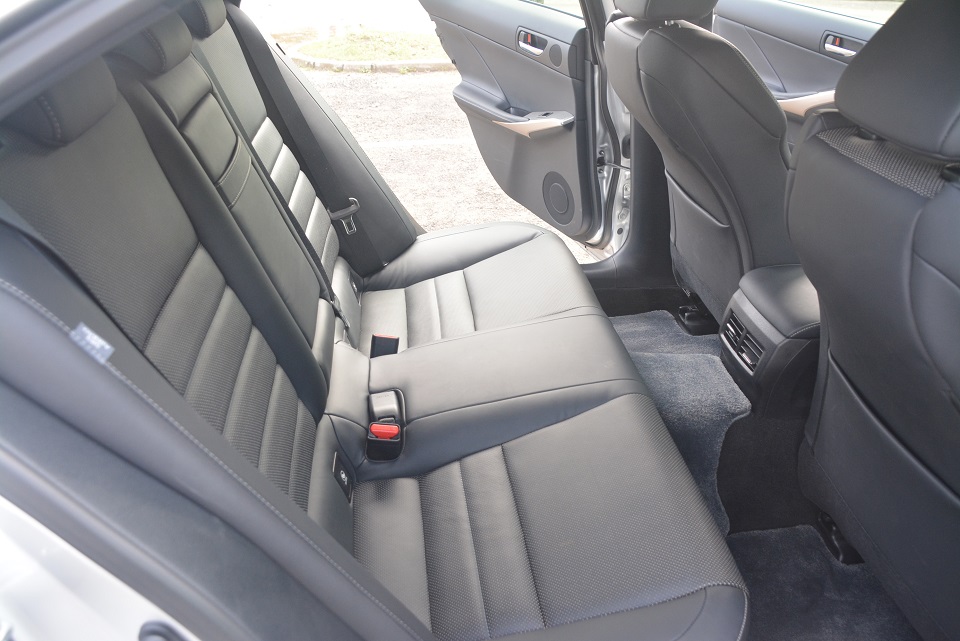 Other than a new variant badge and the enlarged brake discs, there aren’t any new design cues that will help you differentiate the new IS 200t from the outgoing IS 250. The same appearance as introduced with when the third generation IS was launched in 2013 continues unchanged.

Considering its near-impeccable build quality and some amusingly fanciful controls, it seems almost cruel for us to describe the IS’ cabin as a weak link of the package. Despite built to obviously higher standards than the already luxurious interior of a Camry, Lexus did not quite manage to encapsulate the cabin with the cosseting sense of opulence of the W205 Mercedes C-Class or the sophistication of an Audi A4. 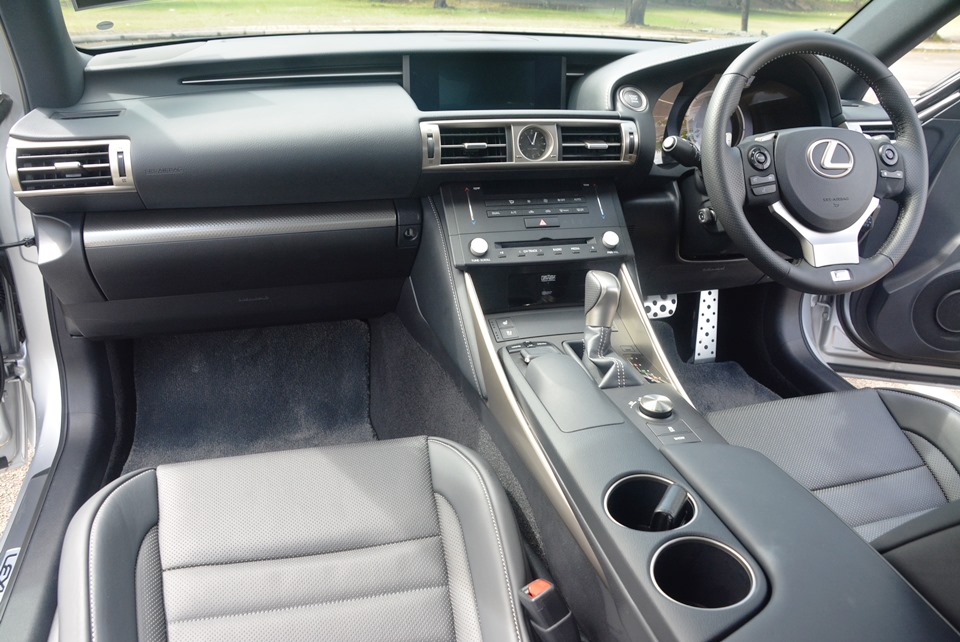 Don’t get us wrong. We have no doubts on the fit and durability of the IS’ cabin, but its sense of occasion – its ‘wow’ factor, shall we say – is lacking. Simply put, Lexus’ audacity in charging a higher price than rivals did not manifest into a commensurate elevation in ambiance. A customer coming over from a Mercedes-Benz showroom will have a hard time believing that the IS costs more than a C-Class.

Cool touches in the cabin include the touch panel control strip along which you just slide your fingers up and down to adjust the air-con temperature and, in F Sport specification as tested, the virtual instrument cluster that alternates between two configurations at the touch of a button. We are, however, not very big fans of Lexus’ joystick-operated infotainment interface, which lacks the intuitiveness of rotary knob-controlled systems used by most cars in the market.

Past Lexus models often fall short in their driving assessments, usually due to less than engaging chassis setups. The IS 250 positively bucked that trend in 2013 with neatly-sorted dynamics, but its naturally-aspirated V6 lacked the grunt to fully exploit the talents of its new chassis. The IS 200t adds crucial muscle to the equation, and the result is straight line performance that can claim parity with segment benchmarks.

To be fair to the old V6, that engine had merits of its own, and if there’s a benefit of driving dynamically-sound vehicle with an underpowered engine, it’s that you can gun it right to its limits without worries. The 200t requires a bit more finesse on the throttle around bends than the 250. The old V6 was also slightly smoother to rev, but we reckon the greater flexibility of the new engine is of much greater appeal. 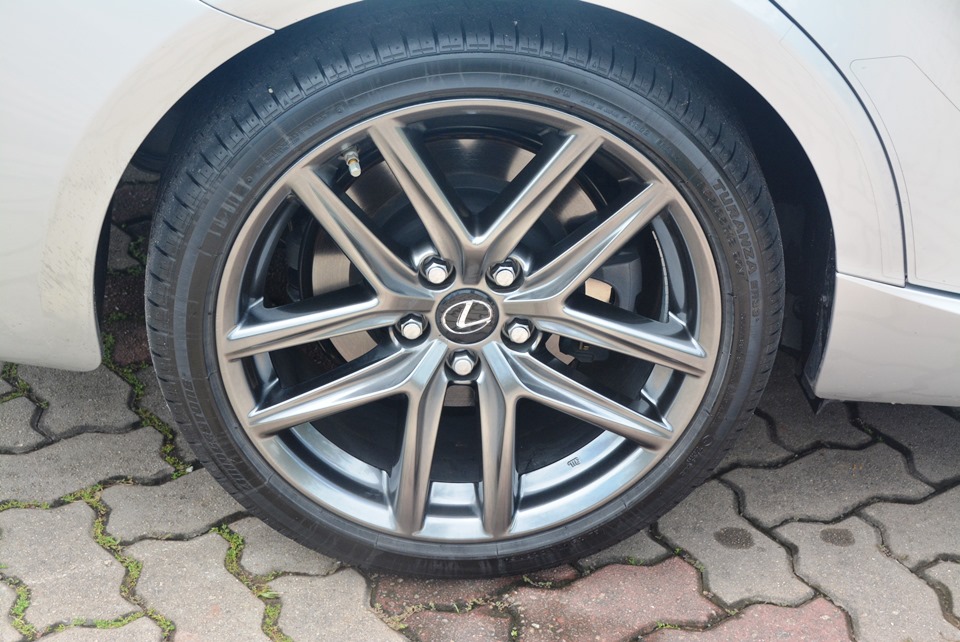 The engine’s widened plateau of peak torque matches nicely with its new 8-speed transmission. Where the old 250 with its 6-speed gearbox required continuous boiling of its engine at high revs to make quick progress, the 200t delivers a similar dose of acceleration with considerably less effort.

Ride and handling builds on the good work made during the 2013 full model change. In our experience with the 250, the passively damped Luxury variant had the better-judged setup for on-road driving; its suspension proving more adept at soaking up road imperfections and was thus better composed than the F Sport model. For this review of the 200t, we were only given an F Sport test unit to try out; compared to the IS 250 F Sport, the current one offers a more supple ride whilst retaining the outgoing model’s neutral chassis balance. With a lighter engine up front, turn-in is keener too. 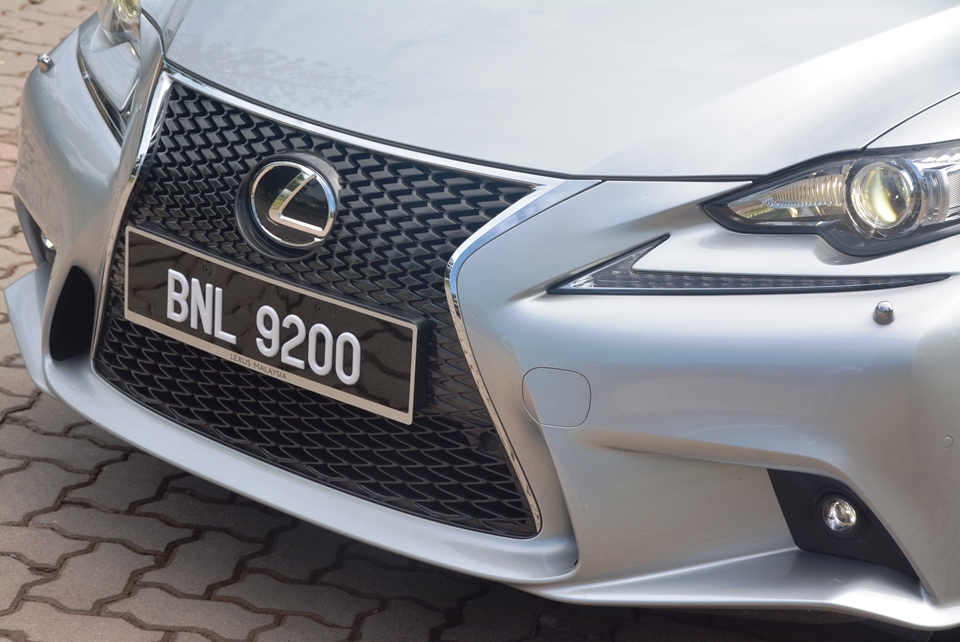 We rate the Lexus IS very highly. It is a well-engineered vehicle with style and panache that puts it on par segment’s best. You can also count on it being a less temperamental vehicle to live with than the Germans, thanks to Toyota’s meticulous dedication in finetuning vehicle reliability. That we can positively say that its chassis dynamics is second best only to the BMW 3 Series in this segment is perhaps the highest praise we can lavish on it.

There are many other positives to the product, but they are hampered by one big setback – price. Quite what Lexus was thinking of when starting the IS’ pricing that far above the Mercedes C-Class’ level is anyone’s guess. Even if we were to accept the fact that the IS is fully imported as opposed to being locally assembled like the C-Class and 3 Series, a base price of nearly RM300k becomes difficult to excuse when RM312k brings an Audi A4 2.0 quattro all the way from Europe. 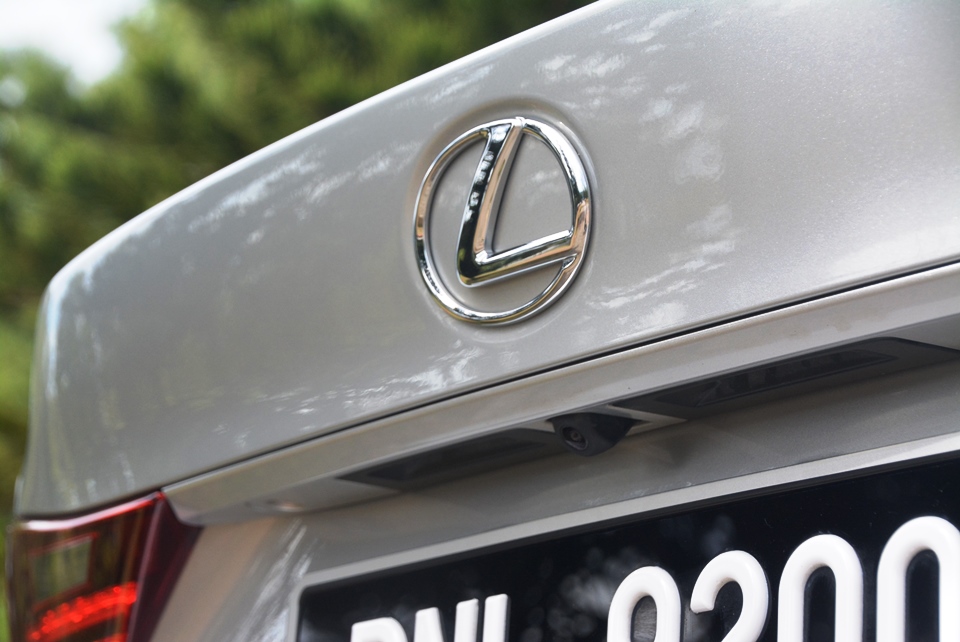 The IS’ considerable premium would have been easier to justify if Lexus had lavished more effort on its cabin, but fancy virtual instrument cluster and touch panel temperature control aside, material selection and overall ambiance fails to match up to the C-Class.

So, here we are, a Lexus IS that is competitive with the best vehicles of its class in both specification and driving experience, but ultimately too expensive to justify. 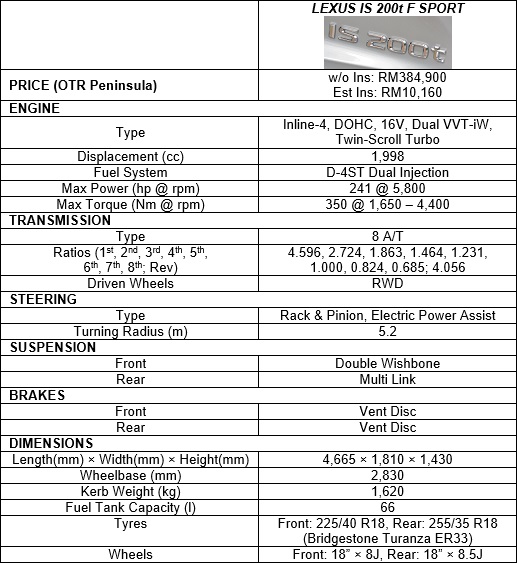