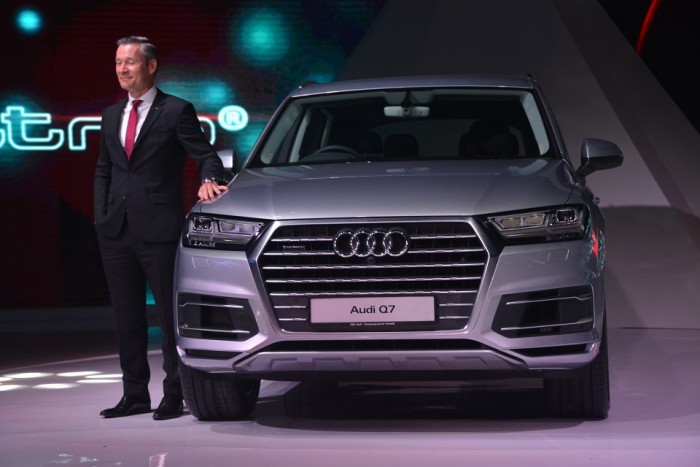 The second-generation model of Audi’s flagship SUV, the Q7, makes its official entry to Malaysia having just only hit European markets this summer. Like its predecessor, the new Q7’s MLB Evo platform will also go on to underpin next-generation models of the Volkswagen Touareg and Porsche Cayenne. The same hardware also features in Bentley’s new Bentayga flagship SUV.

First introduced in September 2005 at the Frankfurt Motor Show, the original Q7 was built on the VW Group’s PL71 platform shared with the first generation Touareg and Cayenne that were both launched in 2002. But whilst the Touareg and Cayenne had both advanced to second generation models in 2011, the Q7 continued in its original guise until this new version debuted globally this year. 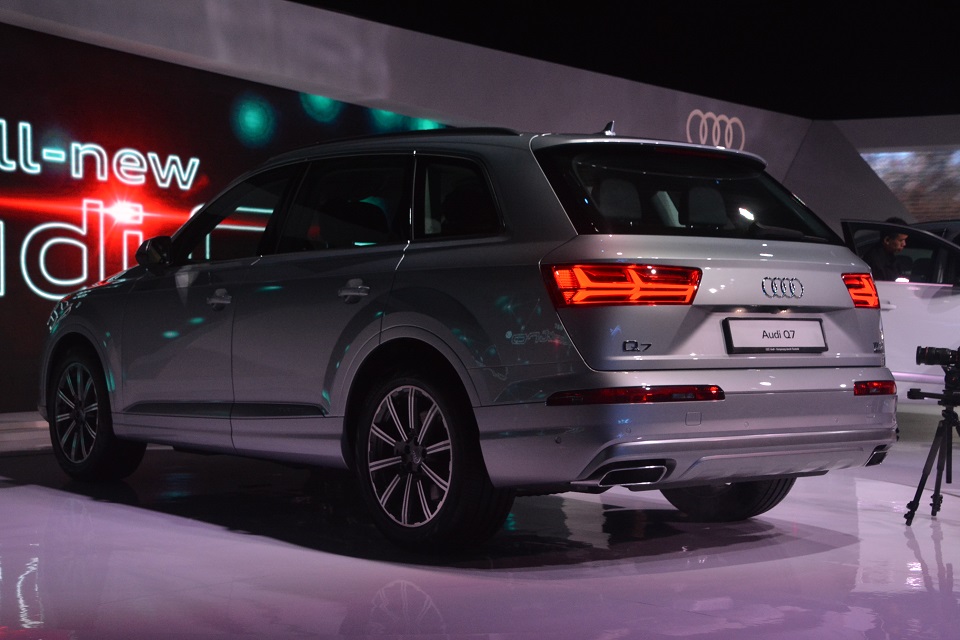 In typical Audi fashion, the Q7 embraces evolutionary design changes from the previous model, but implementing the latest styling cues of the Audi brand, such as the Singleframe grille as well as distinctive LED headlights with signature daytime running lights. Stylistically, the new Q7 appears sleeker and less bulky than its predecessor. There’s a good reason for this though, and it is because the Q7 has actually become smaller than before.

Measuring 5,052mm long, 1,968mm wide, and 1,740m tall, the new Q7 actually sports reduced external dimensions over its predecessor, shrinking in length, wheelbase, and width, but growing in height. More importantly to note, perhaps, is the considerable reduction in mass of some 325kg from its predecessor, achieved with the extensive usage of advanced lightweight materials in its body construction. To give the figure some context, 325kg is the weight of a baby grand piano. 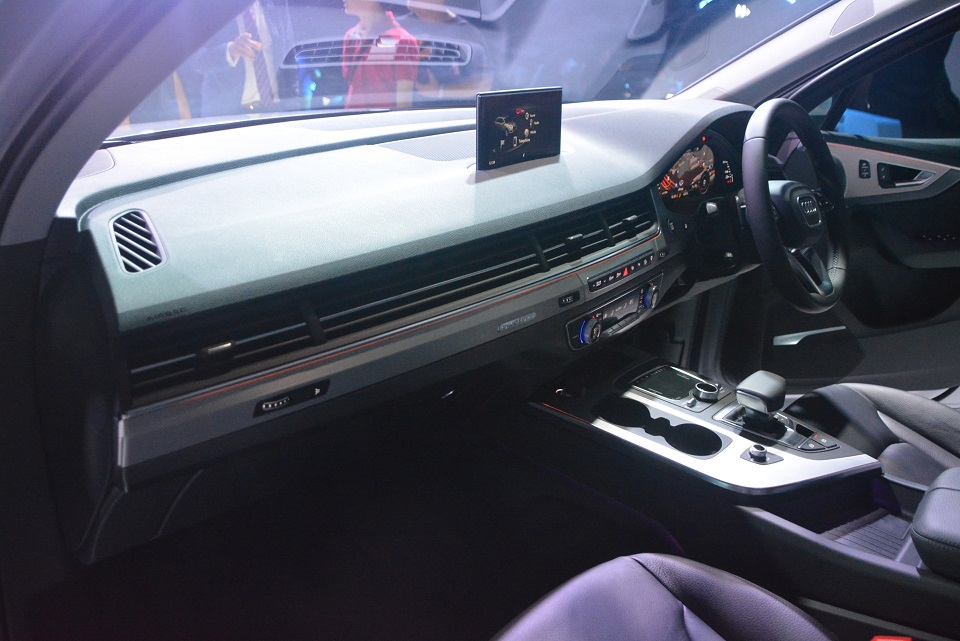 Globally available with a choice between five- and seven-seater configurations, the Q7 is nevertheless specced exclusively as a seven-seater for the Malaysian market. Each of the five seats in the second and third row are individually foldable, allowing cargo space to vary from 770 to 1,955 litres depending on arrangement. For added convenience, the two third row seats are folded by electric operation.

Up front, the Q7’s clean, minimalist dashboard houses Audi’s advanced MMI navigation plus infotainment system with a virtual instrument cluster for the driver, along with an 8.3-inch retractable centre screen and touch panel on the centre console to provide the front passenger access to various in-car systems. Audio is delivered by a Bose 3D sound system with 15-channel amplifier sending 558 watts of output through 19 speakers.

In the engine room sits the latest generation of Audi’s 3.0-litre TFSI V6 petrol engine which combines direct and port fuel injection to achieve the best benefits of both fuel systems. Mated with ZF’s 8HP automatic transmission with Tiptronic manual control, the supercharged six-pot pumps improved outputs 333hp and 440Nm, up from the predecessor’s 272hp and 400Nm.

On the road, the increase in outputs translates to a 1.6-second reduction in its century sprint time to just 6.3 seconds and top end performance that requires electronic intervention to cap the Q7’s top speed to 250kph. Improved efficiency and the aforementioned weight reduction, meanwhile, help contribute to improved fuel consumption, rated at 7.9 l/100km in the combined cycle and CO2 emissions at 183 g/km. 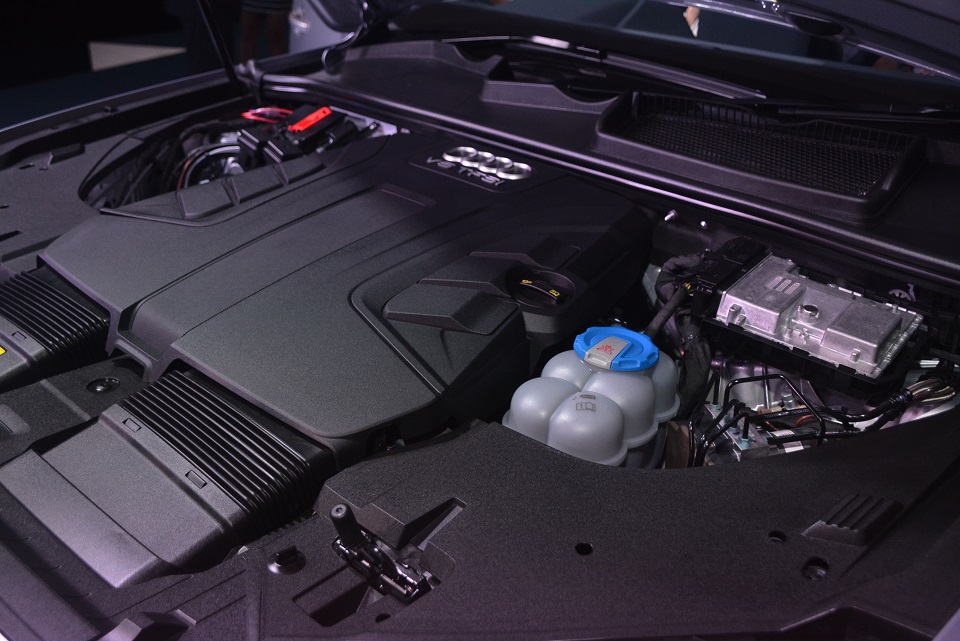 Drive traction in the Q7 is delivered permanently to all four wheels, its crown gear-based quattro all-wheel drive system able to apportion as much as 70 percent of the engine’s torque to the front or 85 percent astern, depending on situation. In normal conditions, the Q7 drives with 60 percent of drive going to its rear wheels.

Also standard in the Q7 is all-round adjustable air suspension, that is able to raise Q7’s drive height by as much as 60mm in Offroad driving mode. Additionally, the suspension is also able to facilitate a convenient loading mode by lowering only the rear axle by 45mm.

Available at all authorized Audi dealerships immediately, the all-new Q7 3.0 TFSI quattro is priced from RM589,900 inclusive of on-road costs, GST, but not insurance.