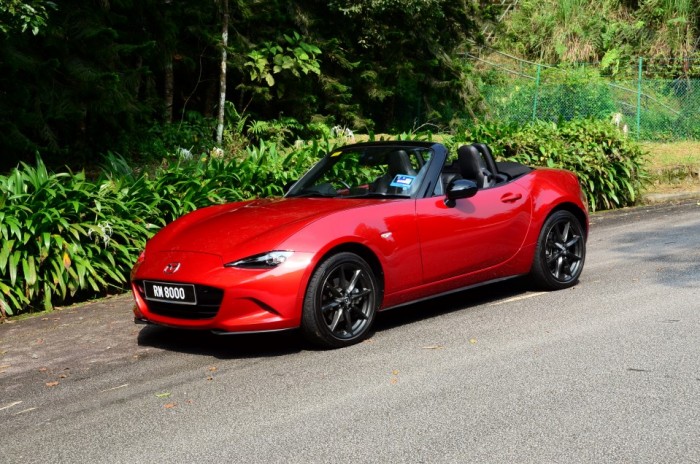 Although we have already put the new Mazda Miata MX-5 through a comprehensive review here on Autoworld written by my colleague Kon, I could not resist a second go at the vehicle when offered the chance to do so recently. This story will not be going into the intricacies of the design, specifications and such, although I may mention some of the specs where it is relevant to clarify what I am going to say about the car.

I thought that it would be appropriate to test it along one of the most popular driving routes in Selangor, the Batu Caves to Ulu Yam to Gohtong Jaya route used by many of the driving clubs and enthusiasts on weekends. I had with me a contributor, whom we will know for now as JS, who is also a car buff, and is actually eyeing the Miata as a weekend fun car. 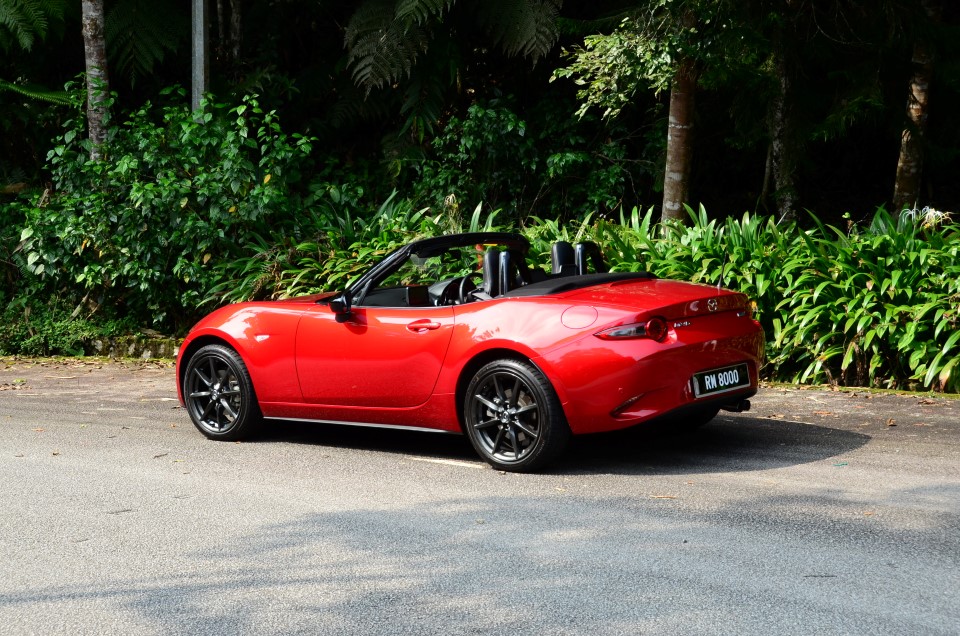 JS drove the first part of the journey uphill, as I wanted to have a feel of the Miata as a passenger, and at the same time, explore the little extras that come along with it. I know for a fact there is no glove compartment, which can be a little of an inconvenience, but that is made up be a little lockable box that is located behind the driver, in between the two seats. Yes, it is a two seater, front engine, rear wheel drive roadster, with a mechanical rag top. Looking around for the drink holders that Malaysians appear to be so engrossed with, I found them also in between the two seats, and a little out of the way. Not that these items are important anyway, because when you start driving this little roadster, everything else becomes less important. I also found this gizmo called Lane Departure Warning, which emits an audible warning if you change lanes without signalling. Fortunately, one can turn it off. Also available is traction control, which can also be switched off.

Back to the drive, it started to rain as we approached Batu Caves; we both decided that it would be just a cruise on account of the rain. Still, we got along at quite a reasonable clip, but we kept the speed sane. It wasn’t that JS is unaccomplished as a driver; rather it was me who is the proverbial ‘bad passenger’, and in the wet section before we hit Ulu Yam village, some of the sharper turns had me wishing the Miata had this thing I would like to call the ‘OMG’ handle, you know, that handle usually found on top of the passenger door for the passenger to grab and say “OMG”? Well, if I had a say in the design of the next upgrade, I would have one put in. The fact that the Miata is a rag top precludes the placement of the OMG handle in the normal place, but later, when I was driving, JS was looking for it too, and he actually stated that there is a spot on the A-pillar where one might fit. To be fair, JS handled the car very well, going not too fast, and not to slow to be boring, using the correct lines and ‘flowing’ the Miata smoothly through the corners.

Despite the wet conditions, I could feel the car was tracking well. The only thing that disconcerted me a little was the fact that road spray from cars we were about to overtake was making the car dirty, and we hadn’t taken any pictures yet. The other thing was the numerous deep puddles of standing water that could catch one off-guard. I was actually more worried about other drivers in front of us getting caught out and collecting us, so I had to tell JS to maintain a good enough gap between us and the cars in front.

Fortunately, it started to dry out after about five kilometres into the boondocks, so JS could go faster, and by the time we got to Ulu Yam, the rain was gone, and the sun had come out. Still, the car had got a little dirty, it being a bright red, and there was that white powdery road grime all over. So it was a quick stopover at a car wash (you will be surprised at the number of car wash joint in Ulu Yam – I counted four or five in just a one kilometre stretch; they must have sprouted just like goring pisang stalls sprout along the roadside. 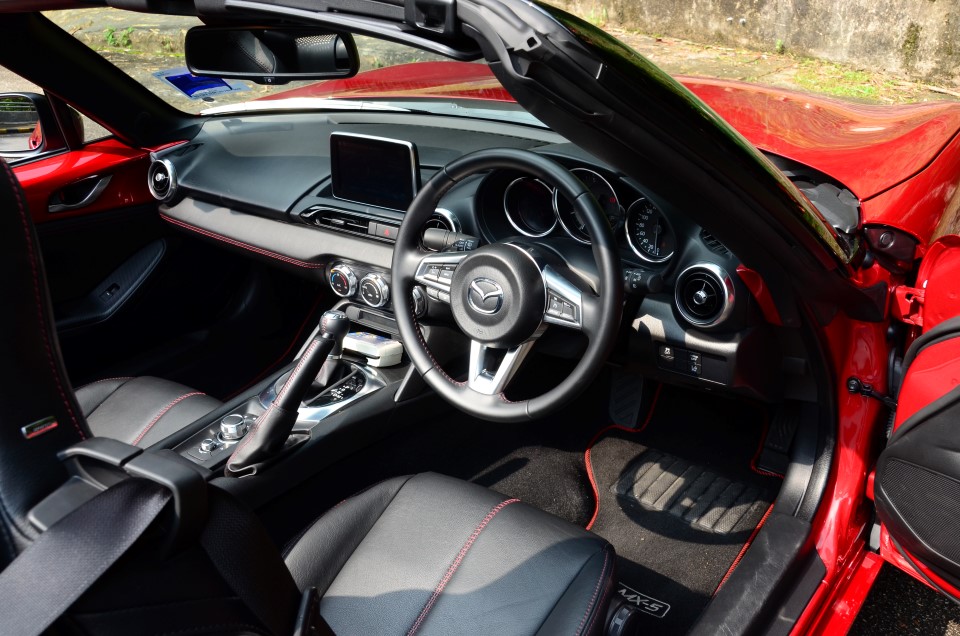 The car wash people were visibly impressed, this being probably the first MX-5 they had seen up close and personal – so they took great pains to wash it carefully, and gently wiping it dry. We continued on our journey, but still, if you look carefully at the photos we took, there was still some road dirt that somehow got onto the sides form Ulu Yam to Gohtong Jaya – maybe the road wasn’t as dry as we thought it was. The Miata was certainly sure-footed enough, and there was enough power, due to the excellent gearing for the six-speed auto. In manual mode, we can play with the pedal shifters, although it still shifts up as soon as the ECU thinks you have revved it up enough. Overtaking was easy enough, with agile acceleration despite the fact that there is no turbo charger. All too soon, we had arrived at Gohtong Jaya.

Then it was a short photo session at some secluded scenic spots before we adjourned to a ‘tong shui’ shop for some refreshments. At the shops area, driving with the top down, a simple matter of pulling on a single lever to unlock the ragtop and then pushing it back and downwards till you hear a ‘click’ to indicate the roof is locked in position, a process that takes under three seconds), the first thing we heard was a loud exclamation, “Wah! Lawar!” At the ‘tong shui’ shop, we parked with the top down right in front of the shop, and I started observing the people who walked by. Strangely, the girls would get excited and look at the Miata, while the boys behaved a little differently. They would put on a disinterested look, and keep very quiet. I wonder why. Well, I was lugging my camera around, which indicates I am a motoring writer, and that this was probably not my car. Anyway, the Miata is indeed a head turner and a chick magnet (although at my age, it might be more a ‘mother hen magnet’, if you know what I mean.

Then it was time to come back to civilization again, and it was my turn to drive. Along the way, we had a short encounter with a highly souped up S14, obviously running very high boost, with an exhaust so loud that it drowned out the even the raucous exhaust note from the Miata. Still, agility made up for the lack of horses, and with a little bit of effort, taking the proper line, and using the superb agility of the roadster, we managed to get in front of the S14, both of us putting to shame a Porsche 911 Turbo along the way. Being lighter (just 1,080kg) the Miata can out-brake and out corner the much heavier S14, and the 911 Turbo. We could stay ahead without much trouble as long as there were corners.

Near the bottom of the hilly section, on a long straight, the S14 attempted an overtaking move, and knowing that he is very much faster on the straight, I was almost resigning myself to the fact that I would be overtaken when I heard one big ‘WHISSSH” from the blow off valve of the Silvia – then he had to slow down, and we never saw him again – seems to me this is one of those modifications that concentrate on upping the boost without worrying about detonation and engine temperature. Most of these home-grown engines can last more than five or ten minutes of hard driving before something breaks or the engine overheats. It was fun while it lasted though. 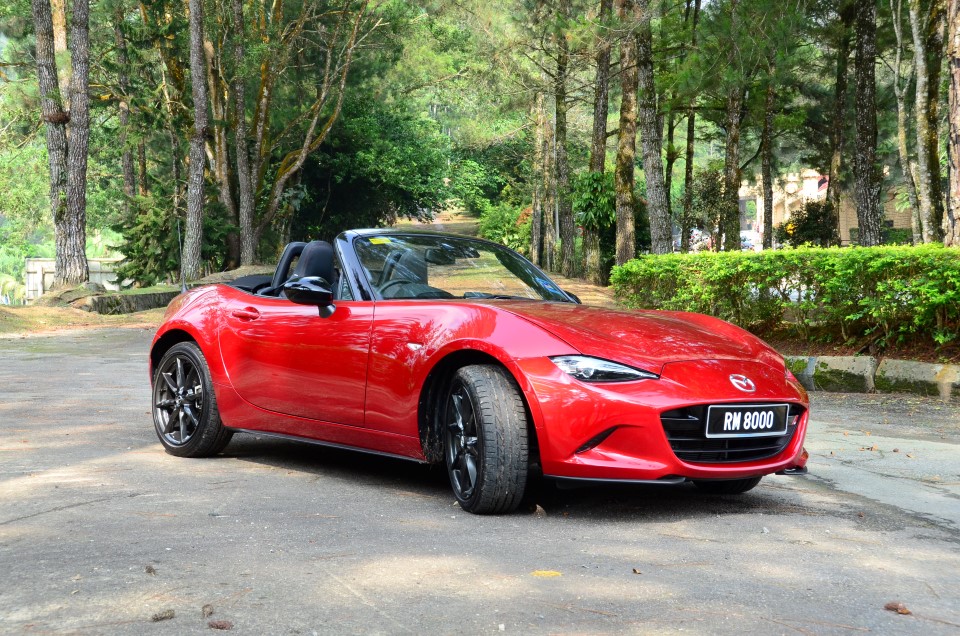 Once we hit the crossroads and turned left towards Batu Caves again, the traffic got heavier, and we slowed down to a comfortable speed, which we maintained all the way back to Petaling Jaya. Fuel consumption for the entire run, which included the hard drive up and down the hill, was 10.7 litres per 100 kilometres, a very respectable figure. It went to a high of 11.2 litres per 100 kilometres during the peak, but dropped down as we lowered the speed. I would dare say that a ‘normal’ driver would be getting in the region of 8.0 to 9.0 litres per 100 kilometres, which would be decent for a roadster. The SkyActiv part of the engine, transmission and chassis really works, and the Zoom-Zoom promise is delivered in full. The Miata is not the fastest car around, but it is really fun to drive.

Despite the electronics and the EPS (electric power steering), the Miata designers have managed to retain the raw essence of the original Miata. The boot is small, and can take one or two small bags, but who really cares? When you are on the road with the Miata, you can feel the road, feel the car, and be as one with it.  Would I pay RM227k for it? Yes, and it would be one car that I would never sell, if I could help it. Wouldn’t it be a nice legacy to pass on?