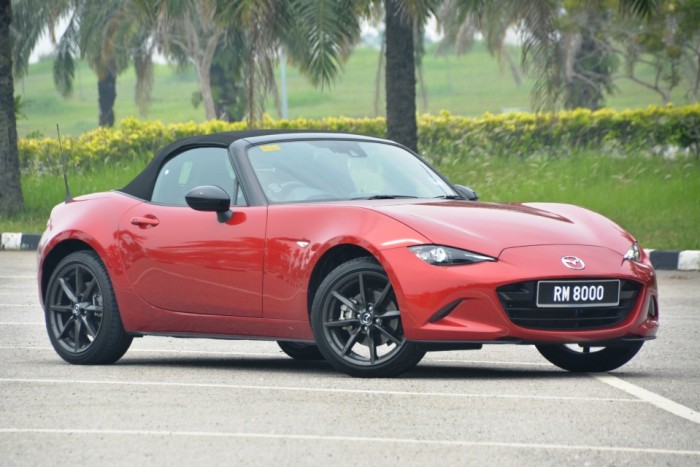 As children, our enthusiasm for cars usually centred on numbers printed on our prized magazines or Top Trumps cards. Because things like horsepower, top speed, and 0-100kph times were printed on sheets of paper that we could read, they were therefore qualities which we could relate to at the time and in our naively simplified logic, a faster car equates a better car.

Now that we are all grown up and having acquired the skill of driving, we come to appreciate that a car is more than just an assembly of components and numbers printed on a specs sheet. There are subjective aspects in a vehicle’s driving experience that simply cannot be communicated with mere numbers. Qualities such as balance, composure, and communicativeness can only be appreciated by experience and can vary significantly from car to car even if the same set of hardware is used.

It is in honing these subjective aspects to make a car exceed the sum of its parts where manufacturers truly earn their money. Mazda has been doing a fine job of this recently; its current crop of SkyActiv-powered vehicles all display exceptional smoothness and mechanical refinement on the move. From the Mazda2 right up to the CX-5 and Mazda6, each car exudes a sense of cohesiveness that can only be accomplished with unflinching engineering integrity. 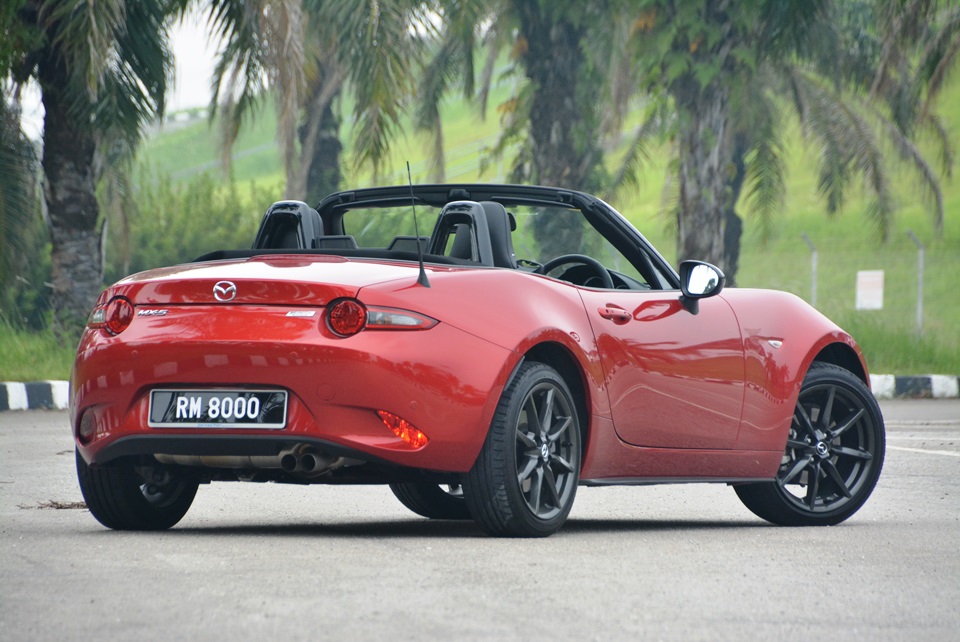 But Mazda’s knack in making wholesome-feeling cars go way back before SkyActiv was even conceived as a concept. The original MX-5, launched in 1989 and still a present day crowd favourite, in many ways continues to embody what Mazda stands for today, the ability to think outside the box and to maximize the engineering potential of seemingly modest components.

The written objectives of Mazda’s SkyActiv philosophy – lightweight, efficient, directness in feel – are all perfectly in line with the MX-5’s original DNA. Now that a new MX-5 is in town, the question we invariably seek to ask is whether formal application of these principles has successfully yielded a new iteration that is an appreciably better car than those that came before whilst staying true to the original’s time-honoured qualities. 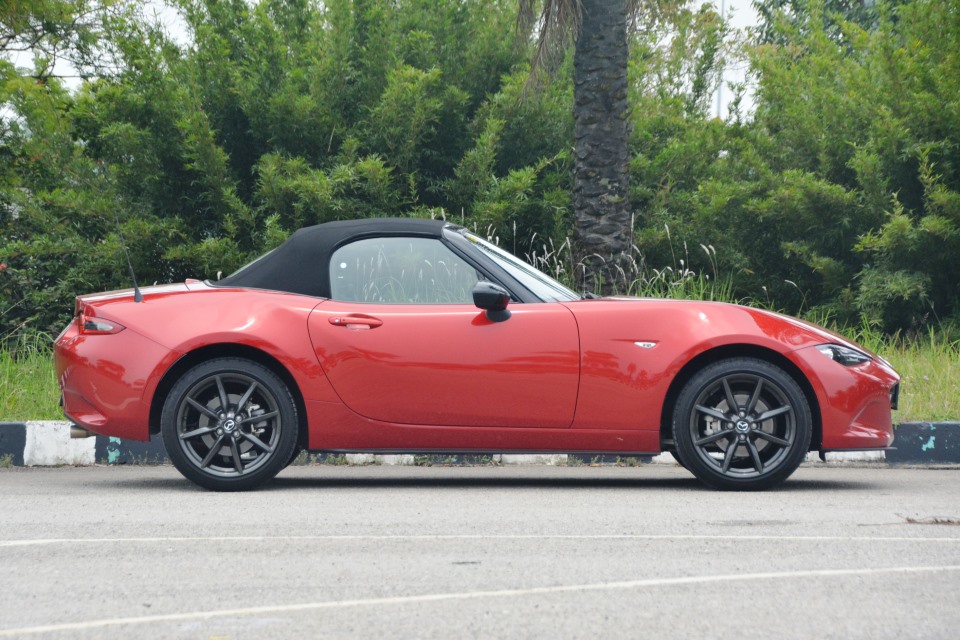 Globally, Mazda offers the MX-5 with the option of 1.5- and 2.0-litre four-cylinder powertrains, each in turn can be paired with either six-speed manual or automatic transmissions. At launch, the Malaysia market is restricted to only the 2.0-litre auto option, but local distributors Bermaz confirms that the manual will follow at a later date.

The case is less optimistic for the 1.5-litre model, however, as complexities of Malaysia’s automotive duty structure make competitive pricing tricky to achieve. Somewhat unfortunate, however, as most international reviews proclaim that it is the smaller engine that offers the sweeter dynamic balance between the two available. 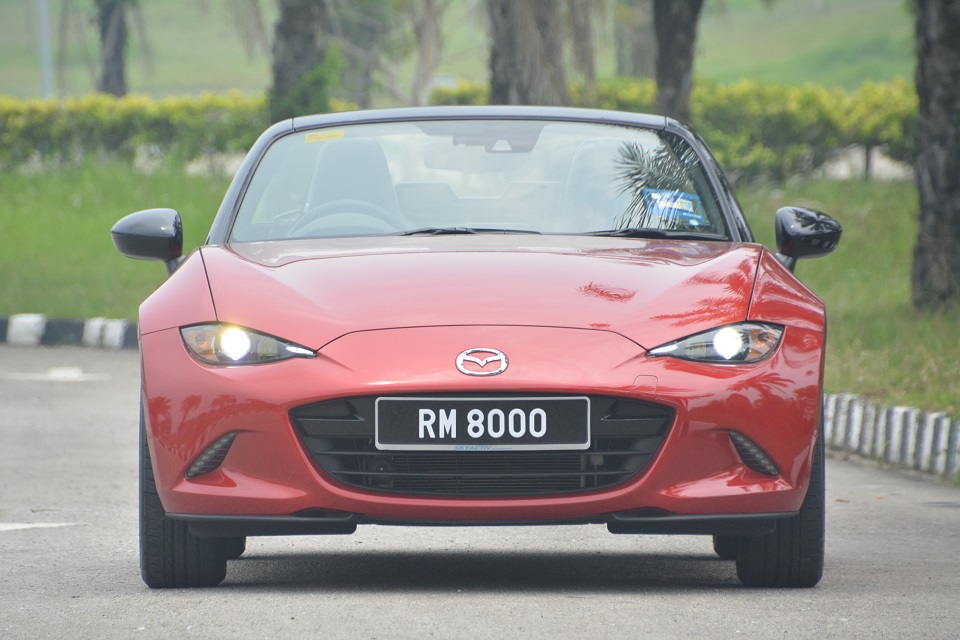 Indeed, pricing is where the new MX-5 deviates somewhat from the mission of the original model, though it is through no fault of Mazda’s in Malaysia’s context. Thanks to exorbitant automotive duties, what was conceived as an affordable fun little sports car requires your parting of ways with 226,376 of your hard-earned ringgits to put on the road with insurance.

It is a well-equipped car for the money, however. Unlike, say, a Lotus, the MX-5 still offers some degree of modernity in the form of keyless entry, auto cruise, 9-speaker Bose audio, electronic stability control, and a proper Mazda Connect infotainment system with touchscreen and rotary knob control. That all these amenities are provided without severely penalizing the MX-5’s 1,080kg kerb weight is an impressive achievement on Mazda’s part. 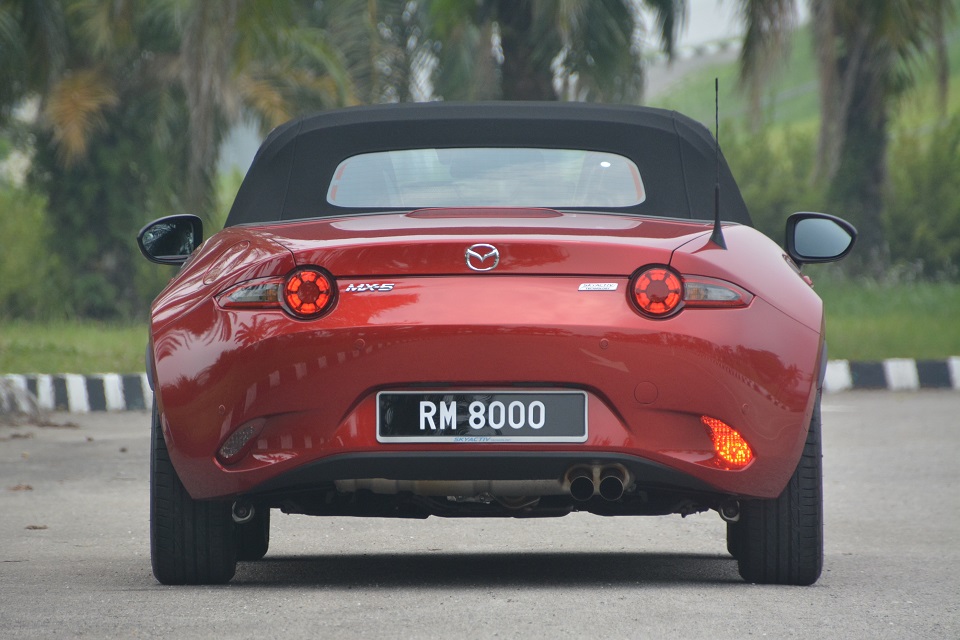 It may wear a SkyActiv badge on its boot, but the MX-5, befitting its standing as halo car of the Mazda range, sports a high proportion of bespoke components not shared with other members of the family. Being the only car of the line-up to sport an FR configuration, the MX-5’s chassis layout is unique to itself, featuring double wishbones up front and multi links at the rear.

Also, unlike other members of Mazda’s SkyActiv model family, the MX-5’s engine sits in a north-south orientation. Whilst built on a common block with similar components featuring direct petrol injection and dual variable valve timing, it is not merely a Mazda3 engine rotated 90 degrees and bolted to a prop-shaft. Many of its internal components are new or modified, and its tuning is specific to the sportier requirements of the MX-5.

Engine outputs are rated at 158hp and 200Nm, which it sends astern via a 6-speed automatic transmission carried over from the predecessor model with some hardware modifications. It is not the newer 6-speed SkyActiv-Drive slushbox as that transmission was designed solely for transverse installation. Manual versions, we understand, do get new transmissions that were designed specifically for this generation of the MX-5. 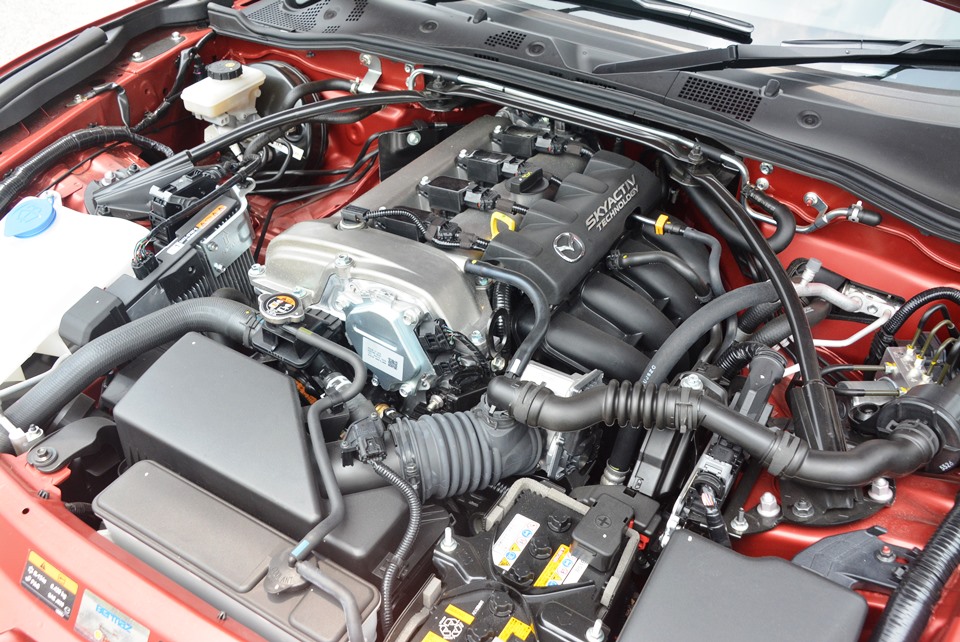 Whilst Mazda argues that the latest MX-5 is its most faithful reproduction of the original model’s concept to date, it also represents the biggest stylistic departure from the familiar template that has seen only evolutionary changes in its first three model generations. In line with the firm’s current Kodo-faced models, the new MX-5 enters the scene as the baddest-looking one of them all.

In comparison to the clean and uncomplicated lines of previous MX-5s, the current vintage sports more curvaceous panels with tauter styling lines. It gives the muscular visual impression of the sheet metal being stretched to barely cover the four wheel arches. We are not sure if its styling will age as well as its predecessor’s, but there is no question it looks bolder than all of them.

Dimensionally, it is the smallest member of the lineage, stretching less than four metres from stem-to-stern. Modern safety and comfort requirements has inevitably added mass, but clever weight savings in other parts of the vehicle have impressively made it lighter than the second and third generation models, and only within a feather’s weight of the original’s. 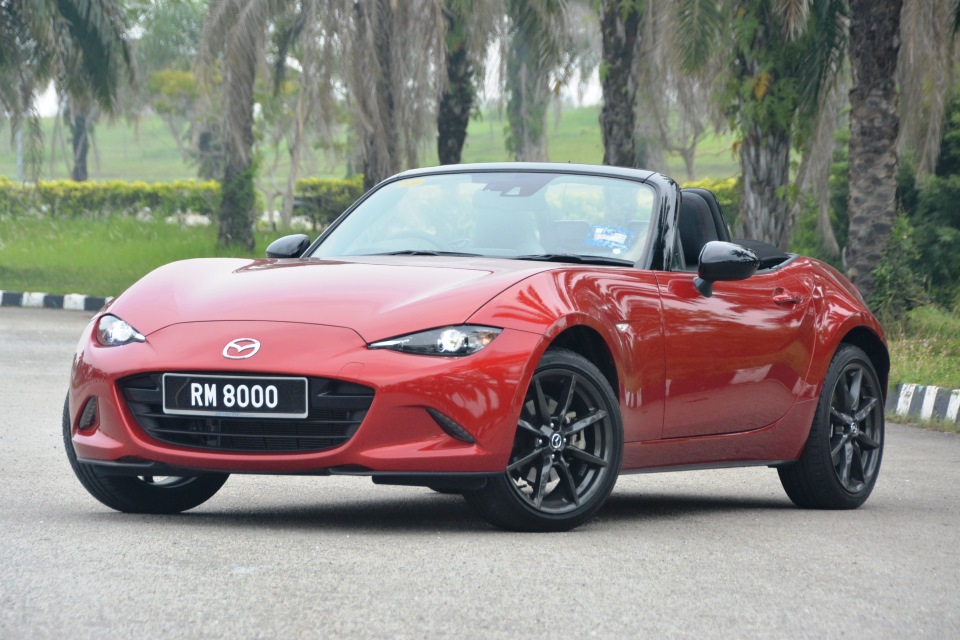 Any person ready to put money down on a two-seater roadster is ready to sacrifice a degree of comfort and convenience in exchange for the sporty driving experience or just the gaya of driving an open-top sports car. Whichever your motivation is, you’ll be pleasantly surprised at what the MX-5’s cabin has to offer in the form of smartly-negotiated compromises that make living with this car on a day-to-day basis a viable preposition.

As mentioned earlier, kit count in the context of it being a two-seater roadster is exceptionally generous, and whilst simplicity is a theme in its design layout, it is not finished with substandard materials. Stroke your fingers across its panels and switch gear, they feel like they were taken off a Mazda6, and that is meant to be a compliment. 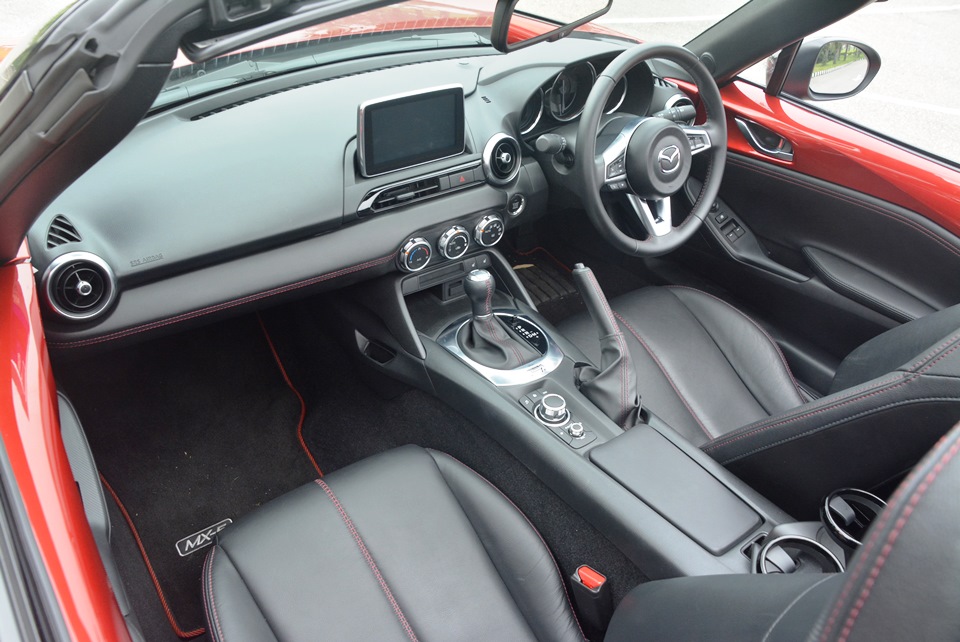 Space, as you would expect, is a premium, and there isn’t even a glovebox; but behind the rear seats are three lidded panels in which you can lock your belongings – not ideal, mind, but useful enough. Mazda also commendably made good use of whatever space they were able to free up along the centre console which, mind, is constrained by having a prop-shaft running under it. A small lidded compartment is placed adjacent to the conveniently-situated handbrake and ahead of the gear lever, the storage tray extends deep enough into the dashboard to accommodate either a Smart Tag or smartphone.

Overall basics of the cabin ergonomics are very well sorted out. Other than a massive intrusion on the driver side from the transmission tunnel, there isn’t much to complaint about at all. Most impressive is the elegantly-designed manual-operated mechanism of the soft top, which you can open and close with just one hand, even on the move if you want to, although we don’t recommend it. Be mindful though, of a major blind spot to the left rear three quarter when the top’s up. 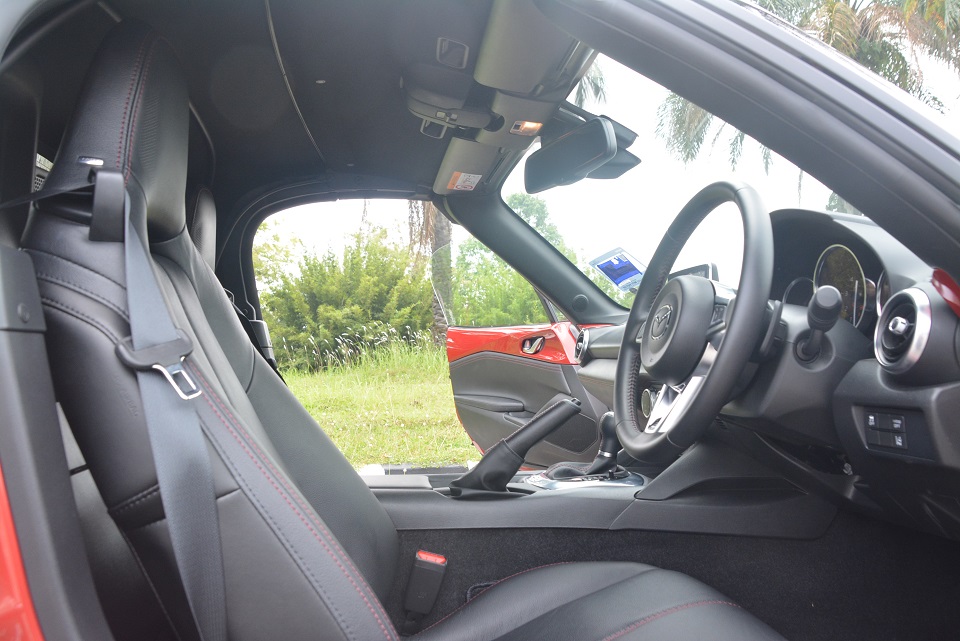 You don’t need speed to fully enjoy the talents of a MX-5. Mazda’s clear-driven philosophy with all generations of its iconic roadster is to provide its drivers with accessible and uncorrupted fun. Like its predecessors, the present day MX-5 boasts neither barnstorming straight line speed nor unlimited reserves of sheer mechanical grip at its disposal.

It’s not particularly fast, the MX-5, and it actually does not corner on rails; but where it really delights, however, is the way it crisply and clearly telegraphs its limits to you and how it responds to your inputs in a natural and organic fashion. So, although grip is not limitless, you approach those limits in a very linear and progressive fashion – you get plenty of warning to back off and if things go hairy, it’s easy enough for you to retrieve the situation. 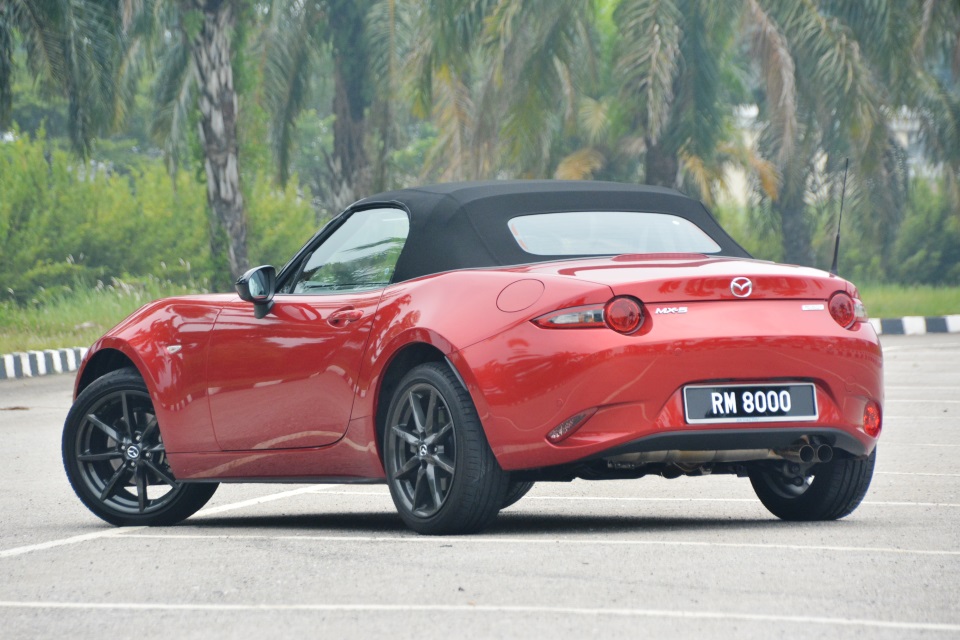 Whilst not what most of us would call blistering, straight line performance is usable. The 2.0-litre SkyActiv-G petrol mill is pleasingly free-revving and smooth in its power delivery, although its aural qualities are not particularly engaging. The linearity of its delivery fits nicely to the MX-5’s benign and malleable character. We’d wish for a manual transmission for even more interaction, but the 6-speed auto as fitted to our test car does its job well enough to not sour the effervescent driving experience.

For days which you’re not planning to thrash it around your favourite back roads, you’ll be pleased to know that the MX-5 does a fair job in serving as a competent day-to-day runabout, provided you don’t regularly travel with more than one companion or a lot of big items. Whilst still firm, the suspension is tuned with adequate pliancy to not shatter your bones at each speed bump or manhole cover. Many cars, in blinded pursuits of sportiness, stiffen their suspension to the point where they become not only uncomfortable around town, but easy to unsettle around corners as well; the MX-5 does not make this mistake. It’s a fluid setup with plenty of composure. 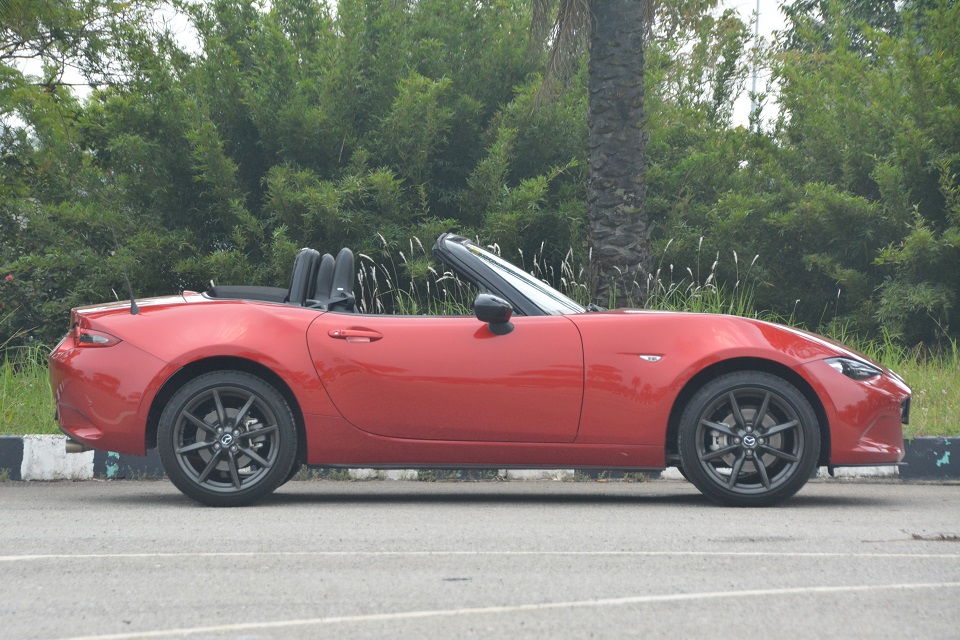 The thing about many so-called ‘drivers cars’ is that their talents require a high degree of skill set to access. Not so the MX-5. Yes, a better driver can inevitably coax more out of it, but you don’t need to be a very good one to thoroughly enjoy its wide spectrum of abilities. Mazda has stuck with the same basic formula of the original and glossed it with modern touches, the result is a car that stays true to its legacy but suitably modernized for today’s needs.

The MX-5 is a conceptually cohesive product; a car engineered with meticulous attention to detail. It embodies the DNA of the original MX-5, brought into sharper focus by the application of the same SkyActiv philosophy that drove development of its current range of models. Whether you look at it objectively as a package or subjectively evaluating its driving experience, there is no question that it fills its brief as a benign fun-loving roadster first whilst doubling as a usable day-to-day vehicle. 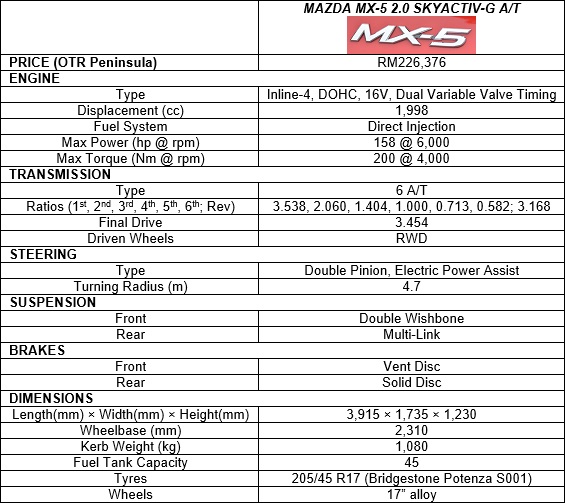