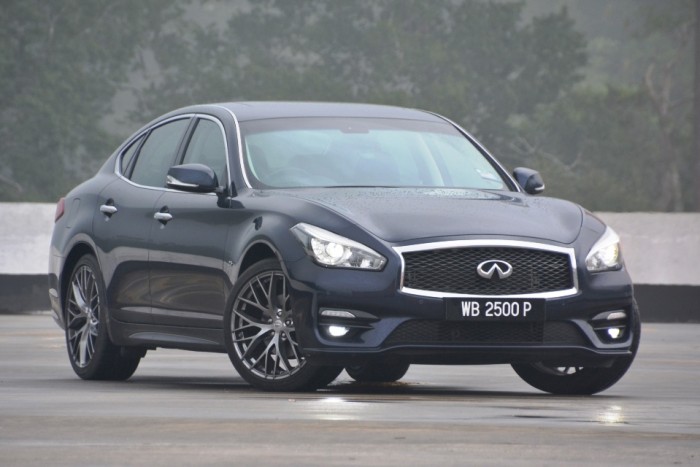 As objective reviewers, we try wherever possible to encourage our readers to evaluate the merits of a vehicle beyond just the badge on its nose. Yet, consumers are notoriously brand conscious; people who shop with a RM200,000 budget are notably reluctant to be browsing in the same showroom that also caters to sub-RM80k econoboxes.

The realization that it takes more than just solid engineering to create a product to that can realistically compete against established luxury marques is what led to the creation of Lexus, but Toyota was not the first to the game. Honda had created Acura three years earlier, and Nissan rolled out Infiniti at about the same time. 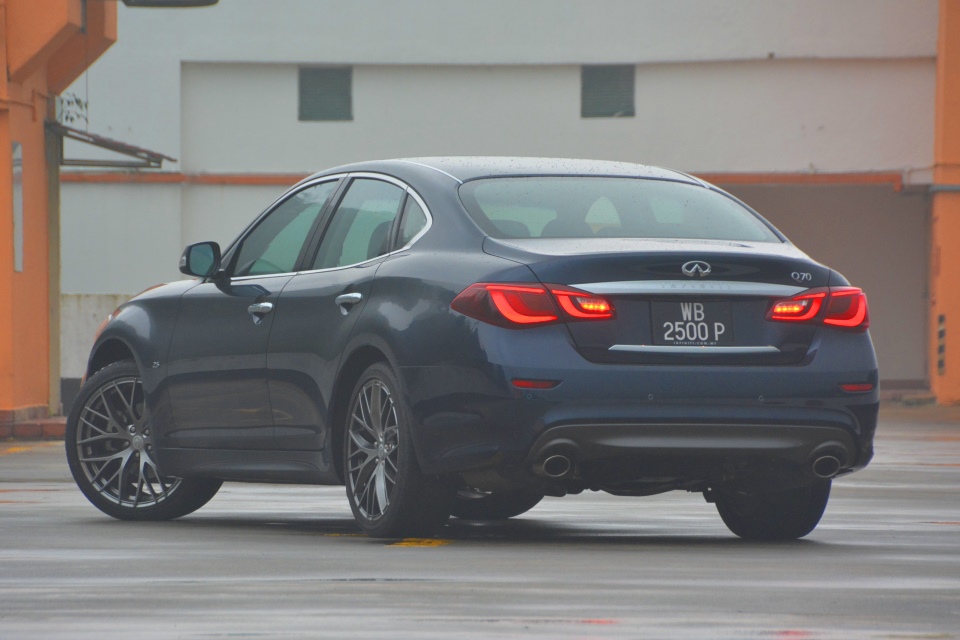 These luxury brands were initially created specifically for North America, but Toyota eventually decided to grow Lexus to become global player. Infiniti has since followed suit and has used a number of ploys to accelerate its expansion and brand awareness; F1 sponsorship of the Red Bull team comes to mind. The said partnership was milked for its worth in promoting the Infiniti Q50 as a vehicle with credible credentials to compete with the BMW 3 Series and its cohorts.

Moving up the range, Infiniti has the M, a mid-sized luxury sedan conceptualized to challenge the Mercedes E-Class and BMW 5 Series. Recently, as part of a range-wide reformatting of its product nomenclature, the M has been renamed the Q70, reflecting its upward positioning from the Q50. The new name comes in conjunction with a new look that was officially launched in our market during the middle of this year. 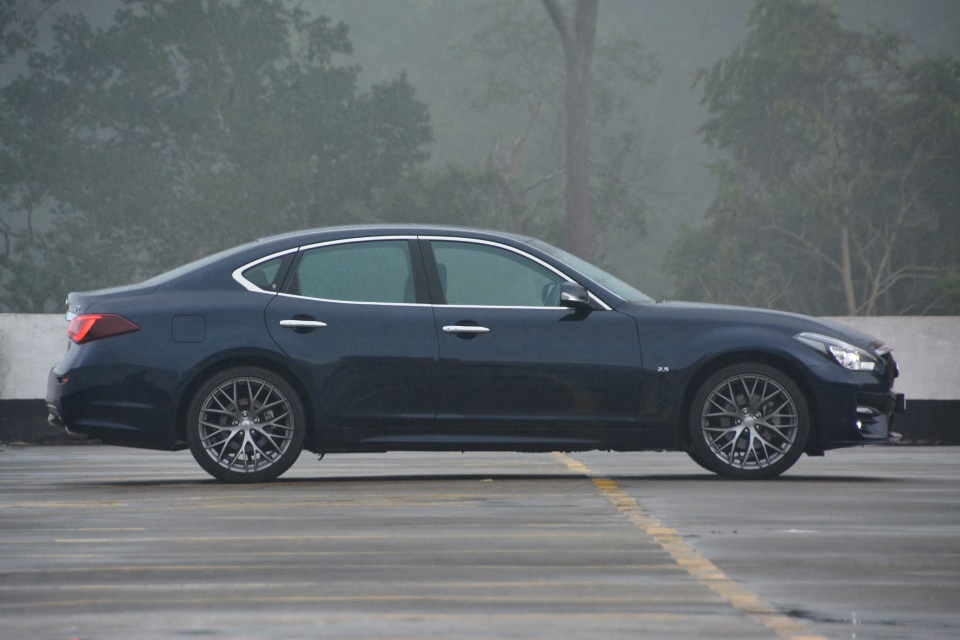 A trio of naturally-aspirated Nissan V6 engines power the Q70. Interestingly enough, the main-selling variant for our market is a decidedly rare configuration globally, Malaysia being one among a small handful of markets that get a naturally-aspirated 2.5-litre V6 model.

At RM295,000 on-the-road without insurance the Q70 2.5 is E-Class metal at C-Class money. Putting its price tag into perspective, the short-lived Audi A6 Hybrid asked for RM288,888 without having to pay a single cent of duty; the Mercedes C 250 (before its recent price reduction) and BMW 328i M Sport both cost more despite being smaller cars and offering less in the way of features. 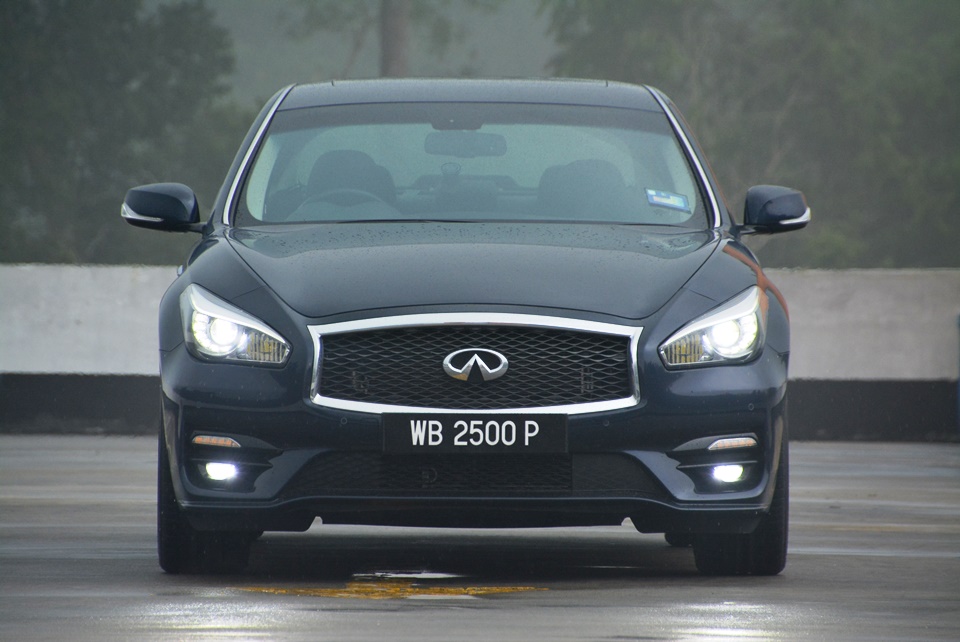 Standard infotainment system consists of a 7-inch central display with six-speaker audio. An additional RM13,000 upgrades that to an 8-inch colour touchscreen system with voice command, Bose 10-speaker audio, Bluetooth streaming, and satellite navigation. Our test car includes the above option upon which a Sports Premium styling pack can be tacked on, adding up to RM330,000. You can also specify sat nav as a standalone option for RM3,500, although in our opinion, none of these are options that you’ll need.

More powerful alternatives are offered in the form of a 3.7-litre petrol variant at RM375,000 and a range-topping 3.5-litre Hybrid at RM420,000. Versions powered by Daimler’s 2.1-litre OM651 turbodiesel exist elsewhere, but are not available in our market. 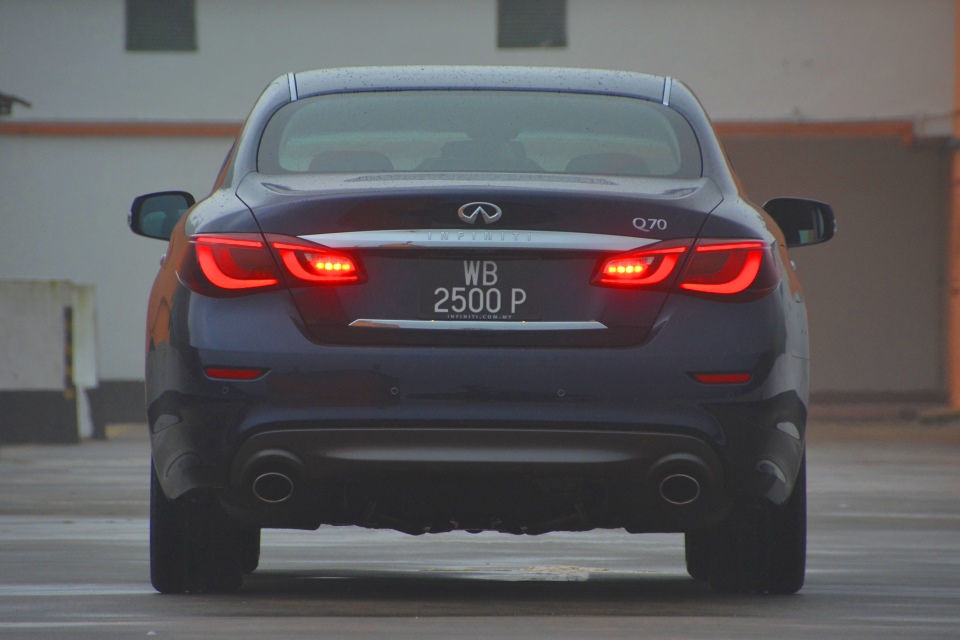 Contrary to popular belief, V6 engines are not inherently smooth. Engineers hate the V6; the only reason this engine configuration exists is that it is easier to package, particularly in a transverse set-up. Yet, the V6 mills of Nissan’s VQ family are renowned for their creamy smoothness – just ask any owner of the previous-generation Teana 2.5 V6.

The Q70’s 2.5-litre all-aluminium powerplant shares the same basic block design as the Teana’s mill, but in a significantly more advanced state-of-being, and its installation rotated 90 degrees to fit the Q70’s rear-wheel drive configuration. Equipped with dual variable valve timing, this version of the VQ25 is optimized for high-revving with microfinished camshafts and resin-coated pistons for reduced in-engine friction. 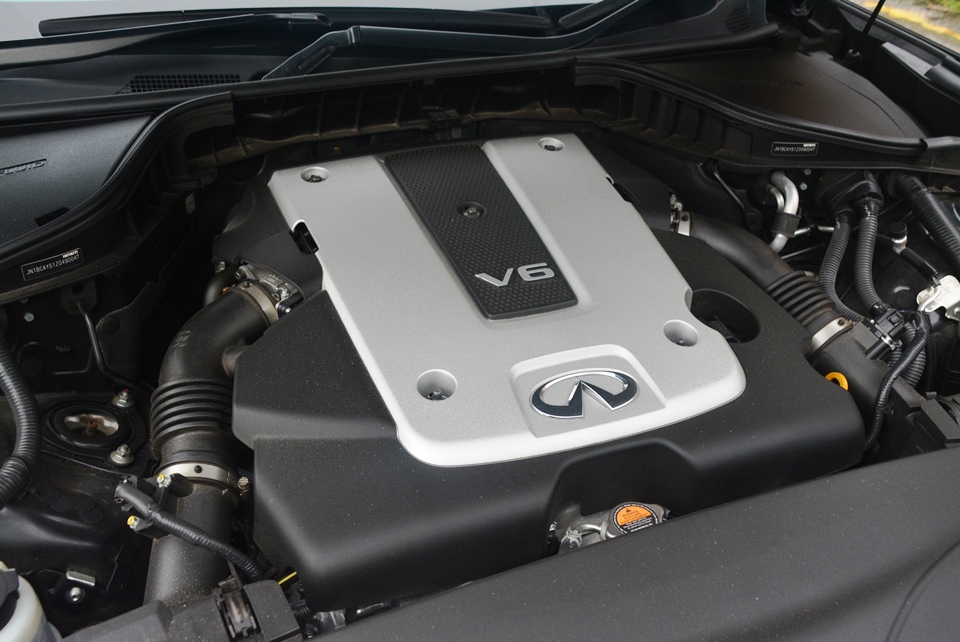 Fitted with a 7-speed automatic transmission, the Q70 2.5 generates outputs of 218hp and 253Nm, enabling it to hit a claimed top speed of 231kph and to achieve a century sprint of 8.5 seconds. The vehicle’s Drive Mode Selector, which adjusts throttle and transmission mappings, provides the driver with four driving modes – Standard, Eco, Sport, and Snow.

The Q70’s platform dates back to the turn of the century, having been used to underpin a considerable number of Nissan and Infiniti vehicles sporting the front-engine rear-wheel drive layout. Independently-sprung all-round with double wishbones up front, the Q70 mounts its engine behind the front axle, allowing it to achieve a commendably-balanced 53 percent front-biased weight distribution.

In its transition from its previous existence as the M, Infiniti highlights that the Q70 received substantial improvement in its NVH package, achieved by adding insulation material and seals where needed. Active noise cancellation is built into the audio system to further reduce perceived noise on the move. 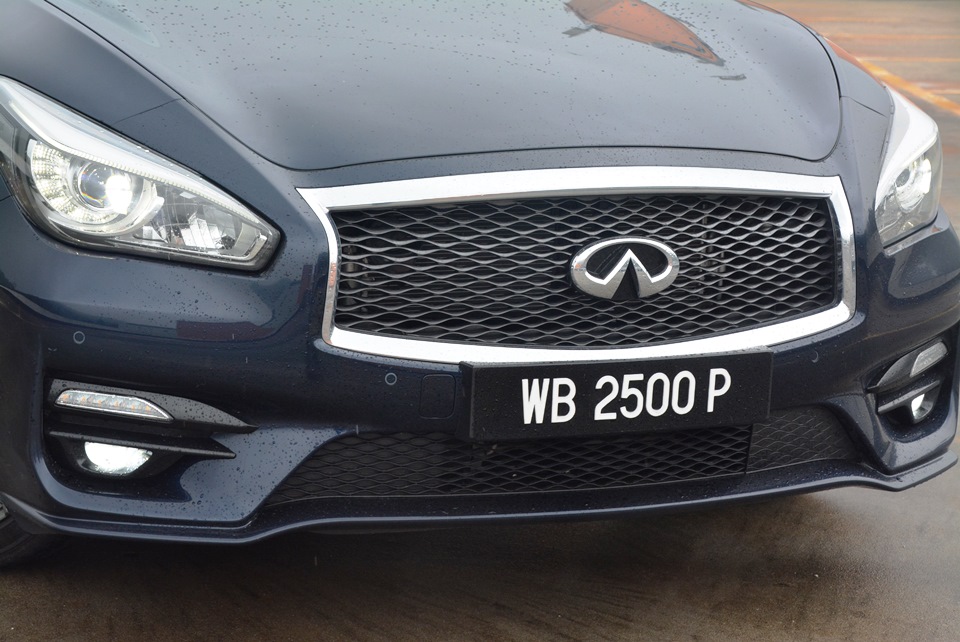 As an upstart brand seeking to break into toughly-guarded territory, Infiniti can ill-afford excessive conservatism in its design; the Q70 is commendably styled with such concerns in mind. In its original appearance as the M, Infiniti’s mid-sizer is notable for its broad swooping lines and bold front fascia. It is, in short, not a boring looking vehicle.

The new Q70 preserves the M’s overall muscular stance, but makes significant alteration to the details in a bid to refresh its appearance. Both the front and rear sections of the vehicle receive stylistic changes with new LED-illuminated light clusters and re-profiled bumpers with more intricate styling touches. Revised details on the front bumpers help establish a familial look with the Q50, whilst illumination signature of the new tail lamps, notably, remind us of the Volkswagen CC.

As standard, the Q70 comes fitted with 18-inch rims, which can be upsized to 20 inches if you opt for the Sport Premium package as fitted on our test car. Additionally, the styling package also changes the standard front bumper to a sportier with with gloss black trim and treats the rear bumper with dark grey paint on its lower section to achieve the diffuser treatment. 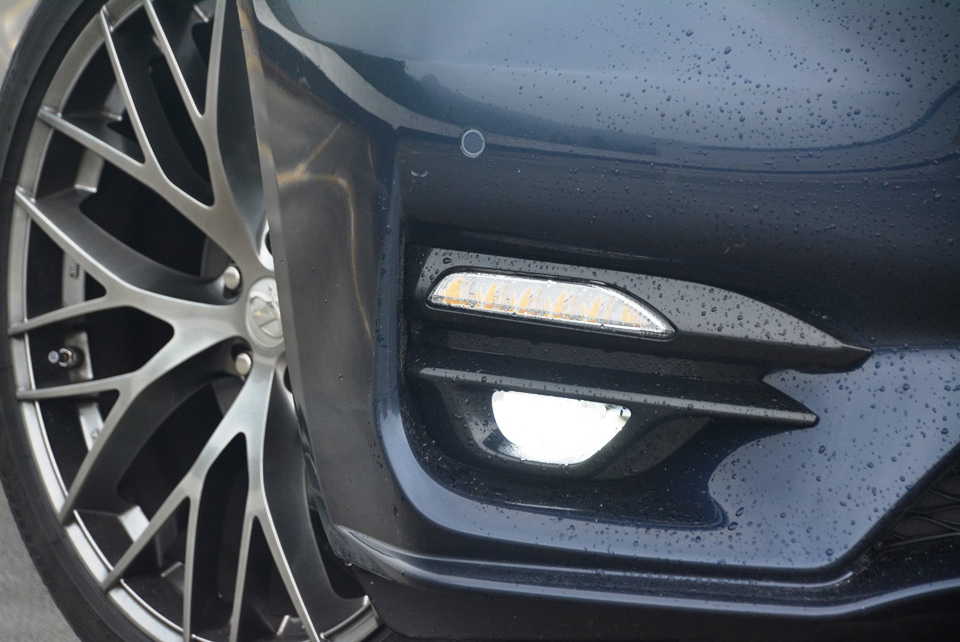 A wide centre console, swooping design lines, and generous distribution of wood trim inserts all contribute to give the Q70’s cabin a positive first impression. Compared to clinically cold but undeniably functional cockpits of teutonic rivals, the Q70’s interior even excels in offering a welcomed dose of flair. It also makes the Lexus GS’ straight-faced cabin look and feel utterly boring in comparison.

The premium impression is further emphasized with a wide array of features to fiddle, but the veneer of luxury looks less convincing upon closer inspection. There is a noticeable amount of shared switch gear with Nissan models and whilst fit and finish felt generally good, overall build quality lacks the attention to detail that one expects at this price range. Look no further than the base of the A-pillar, where the design line on the dashboard and door card meet at less than perfect alignments.

Availability of free-to-use navigation apps with real time traffic updates on smartphones have made in-car integrated satellite navigation systems quickly irrelevant. But that’s not the only reason we recommend against speccing sat nav into your Q70. Although its GPS hardware is built-in from the factory, the actual business of showing you around town is performed by the same locally-integrated TCAT navigation software also offered in Nissan models. Functionally, it’s an acceptable system, but its aftermarket-ish appearance does not befit the premium standing which the Q70 aspires to. 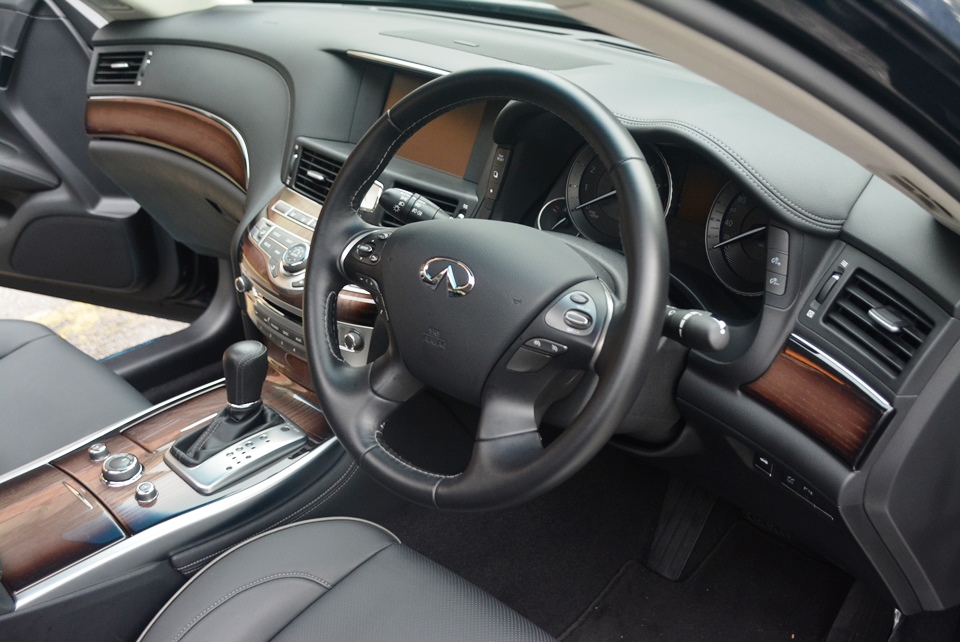 Creamy smoothness of its 2.5 V6 engine highlights the Q70’s driving experience. Whilst it lacks the hard-hitting shove of turbocharged engines currently favoured by its rivals, there is a pleasing sense of immediacy to its throttle response and predictable linearity to its power delivery. Coaxing brisk progress consequently requires greater initiative on the driver’s part, but it pushes with satisfying gusto from the tacho’s mid ranges.

Around bends, the chassis exhibits commendable poise and composure, but less so in communicativeness. The suspension does a fine job in suppressing body roll and helping the car track its line as you power through, but steering is found lacking in feedback and inconsistent in its responses. Damping is well-judged, however; despite wearing optional 20-inch rims with low-profile tyres, our Q70 test car was rarely perturbed by undulations and road patches. 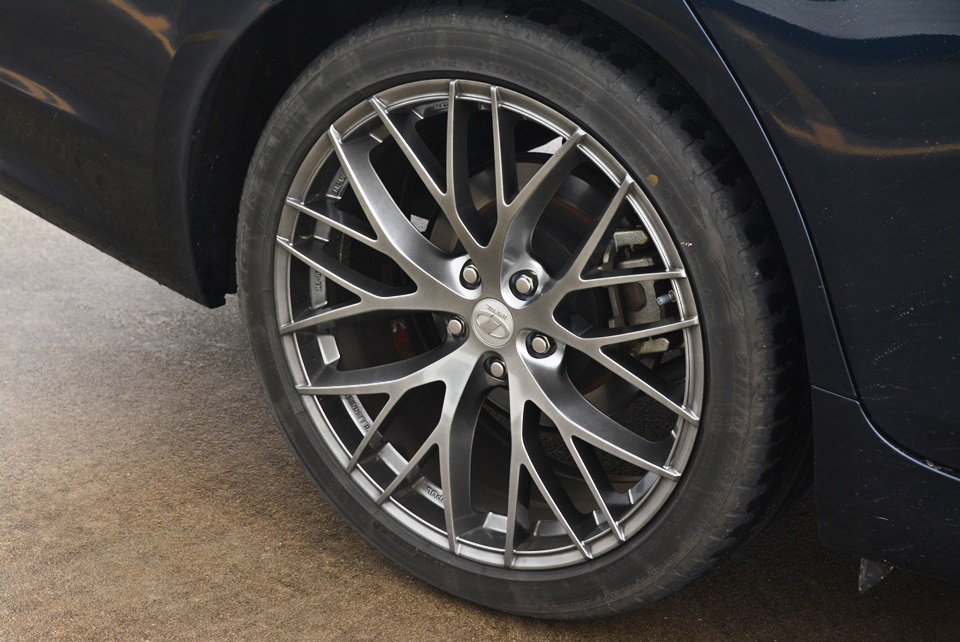 On paper, the Q70 is an intriguing prospect. When Lexus phases out the current GS 250 in favour of the newer GS 200t, the Q70 will be the last chance saloon for buyers in this segment looking for an old-fashioned naturally-aspirated six-cylinder engine. Balancing what you pay against the equipment you get, the Q70 also offers solid value for money – the same amount of cash that gets you the Q70 leaves you short of a Lexus IS 200t.

The flip side of the argument, however, is that premium car buyers look for more than just value for money, and this is where the Q70 falls a little short. For starters, the Infiniti badge does not yet sit in the same stratosphere with the Germans and finishings of its cabin do little to convince that it belongs there. Yes, it is well-packed with equipment, but neither build quality nor switch gear were of the grade required in this segment.

Neither is it particularly convincing from behind the wheel. It is inoffensive to drive, but it is still short of the finesse and sophistication to trouble the segment’s very best. If this were a Nissan, we’d say fantastic effort, but with greater badges come greater responsibilities and higher standards upon which a product should be judged. We are not saying the Q70 has no place in our market – we like its charming engine and we like that it is a left field choice – but its appeal is exceedingly specific and limited. 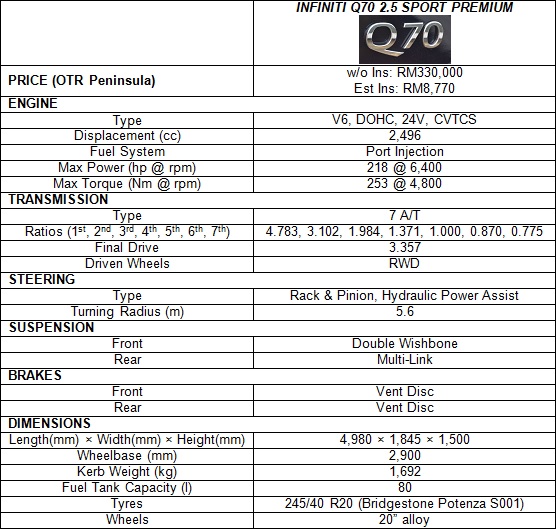