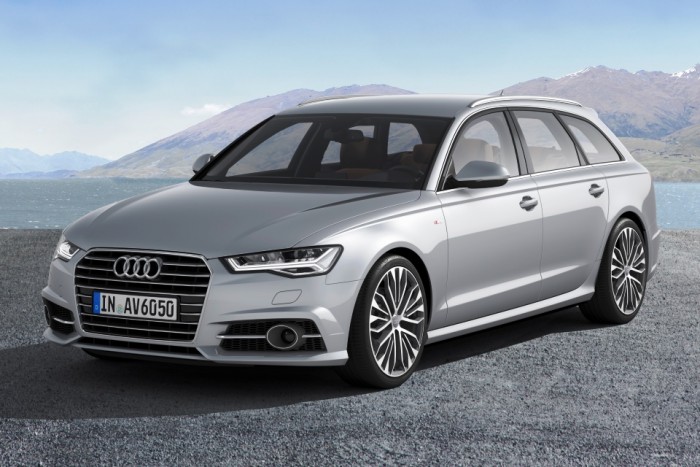 The current generation Audi A6 enters its midlife refreshed with a makeover bring a new appearance, improved features, and perhaps most crucially new engines and transmissions. All versions, from the base front-wheel drive models right up to the RS 6 performance flagship, in both Sedan and Avant body styles, sport comprehensive upgrades as Audi cranks up its pressure on the 5 Series and E-Class.

Externally, the new A6 is easily distinguished from its predecessor with extensive changes made to its front and rear fascias, which now sport a revised grille, new lamp clusters, reshaped air inlets, bumpers, and exhaust pipe. Xenon headlights are fitted as standard, with two levels of LED illumination available as optional upgrades. 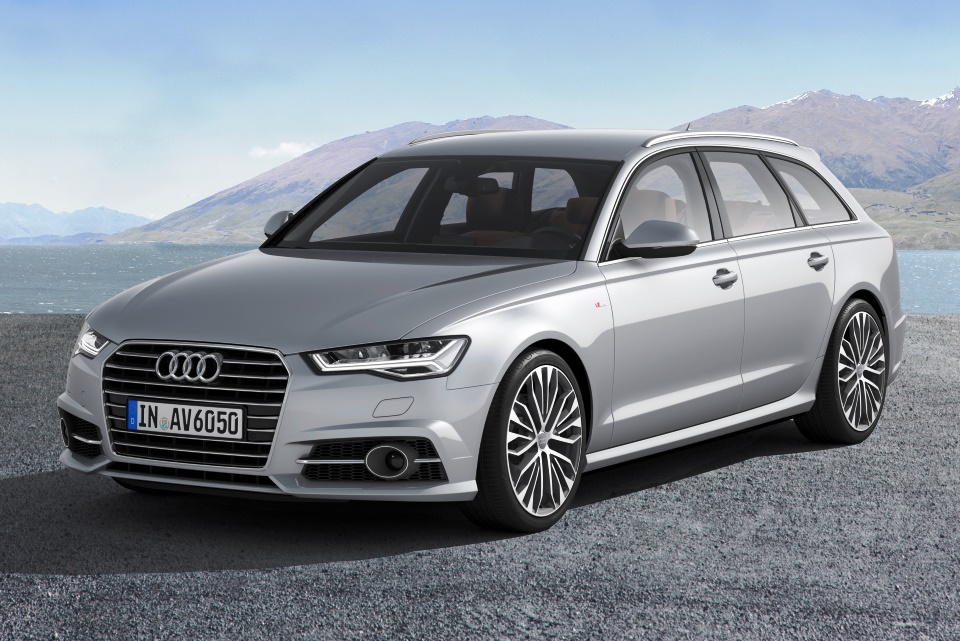 Inside, Audi offers an improved version of its MMI infotainment system, powered by more powerful Nvidia graphics card to deliver crisper images on its self-retracting 8-inch free-standing central monitor. On board connectivity is available via the Audi connect module, which caters for high-speed LTE mobile internet connection. 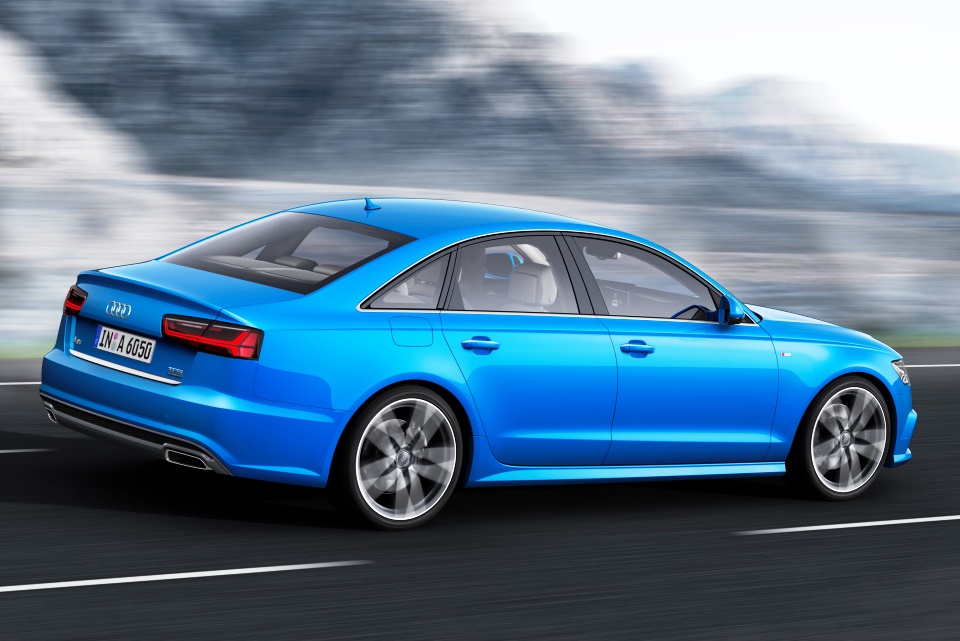 Major changes take place under the hood, where the A6 now sports a choice of three petrol and two diesel engines, the latter available with seven states of tune in total. Outputs span from 190hp in a new 1.8 TFSI engine all the way up to 333hp in the 3.0 TFSI on the petrol side, whilst the diesel side ranges from 150hp to 326hp in either 2.0 TDI or 3.0 TDI formats.

For FWD models, the Multitronic CVT has been dropped, with the majority of variants being equipped with the 7-speed wet dual clutch S-tronic transmission; a 6-speed manual transmission is available with the two lowest engines, whilst the top two diesel variants are fitted with 8-speed Tiptronic auto transmissions. As before, lower-powered variants send traction only to their front wheels, with quattro AWD offered only to 3.0-litre engines. The table below summarizes the various engine, transmission, and driveline combos available (click to enlarge): 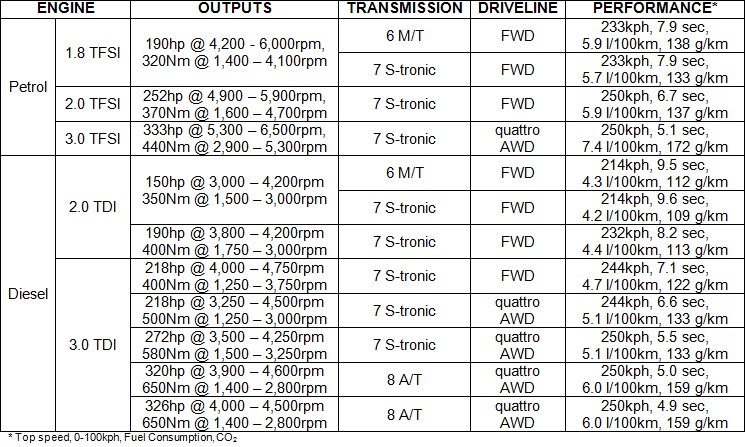 There is no mention of the A6 Hybrid; while we won’t rule out the possibility of a later re-introduction, it would not surprise us either if Audi decided to drop that particular variant. In markets where diesel variants are not hindered by low quality fuel, 3.0 TDI variants are known to offer superior combinations of performance and economy, thus rendering the associated complexity of the hybrid version redundant.

For other derivatives, Audi continues to offer the A6 allroad quattro, available with four 3.0-litre V6 engines, the 3.0 TFSI petrol and three versions of the 3.0 TDI diesel. High performance options, meanwhile, are covered by the S6 (available in Sedan and Avant format) and RS 6 (exclusively Avant). Both these performance flagships are powered by turbocharged 4.0-litre V8s making 450hp and 560hp respectively. Both these engines are equipped with cylinder de-activation, allowing them to achieve rated fuel consumption numbers between 9.2 and 9.6 l/100km in the combined cycle. 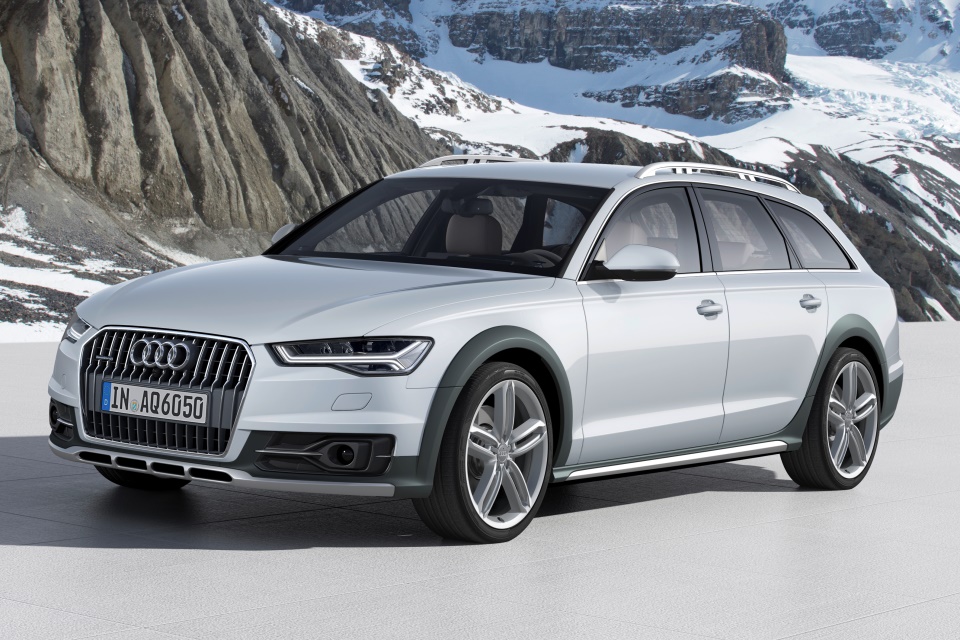