When consumers look for a car these days, technology is often a key consideration in their decision making. This trend is not surprising as advanced technology is giving drivers a smoother, safer and more efficient ride, not to mention enhanced convenience and entertainment with better in-car connectivity systems.

Since its earliest days, Ford Motor Company has been a leader in automotive technology innovation. Among Ford’s many accomplishments as an innovator has been how the company has leveraged technology to offer drivers remarkable efficiency without sacrificing performance, while continuing to ensure higher quality, better connectivity and improved convenience in its cars to enhance the lives of millions of Ford customers around the world.

One very good example of Ford’s intelligent, thoughtful process and dedication to innovation is the resounding and continued success of its unique EcoBoost™ technology.

Even with current advancements in technology, most vehicles worldwide are fuel powered. To address the immediate need for improved fuel efficiency, Ford has developed its highly effective and successful EcoBoost engine.

Ford’s EcoBoost engine technology is intelligent and innovative in how it combines turbocharging and direct gasoline injection to deliver up to 20 per cent improvement in fuel economy and 15 per cent fewer CO2 emissions without sacrificing the power which drivers want. In fact, the EcoBoost is able to ensure superior driving performance compared to larger displacement engines.

Recently, Ford’s ultra-fuel efficient and spirited 1.0L EcoBoost petrol engine was named 2013 International Engine of the Year – one of the industry’s most prestigious global awards. This win marks the second straight year that Ford’s acclaimed three-cylinder engine has captured the coveted crown – no mean feat given the judges’ stringent expectations of excellence in powertrain engineering.

In fact, not only did Ford’s 1.0L EcoBoost engine retain the highest score (the highest achieved in the awards’ 15-year history), the win also represents only the third time that a manufacturer has been given this historic back-to-back title. Additionally, the 1.0L EcoBoost retained its title as “Best Engine Under 1.0-litre”, a pre-requisite to being shortlisted for the coveted International Engine of the Year.

“With technology as mature as the internal combustion engine, it’s very rare to achieve a true breakthrough, but that is exactly what the team accomplished with this engine,” said Dave Westerman, regional manager, Asia Pacific Emerging Markets Services Group, Ford Motor Company. “You have to drive it to believe a small three-cylinder engine can deliver such performance and fuel economy.”

A panel of 87 automotive journalists from 35 countries around the world judged the engine on its drivability, performance, fuel economy, smoothness, refinement and the successful application of advanced engine technology. The jurors each had 25 points to award to their five favourite engines in each category. A maximum of 15 points could be allocated to an engine, and the minimum was one point. Engines could not be tied for the top spot.

Dean Slavnich, co-chairman of the 15th International Engine of the Year awards and editor of Engine Technology International Magazine, said: “Baby EcoBoost – Ford’s first-ever three-cylinder design – is still the engine to beat across the board. It’s economical in real-world conditions while the compact turbo helps ensure that the entire package can power larger vehicles like the Grand C-MAX with ease.”

Small enough to fit in the overhead luggage compartment of an airplane, the 1.0L EcoBoost engine, which delivers the same output as a 1.6L four-cylinder, is currently offered in small cars such as Fiesta and B-MAX and compact offerings including Focus, C-MAX and Grand C-MAX.

The new Fiesta 1.0L EcoBoost variant for the Malaysian market is slated for launch next year. 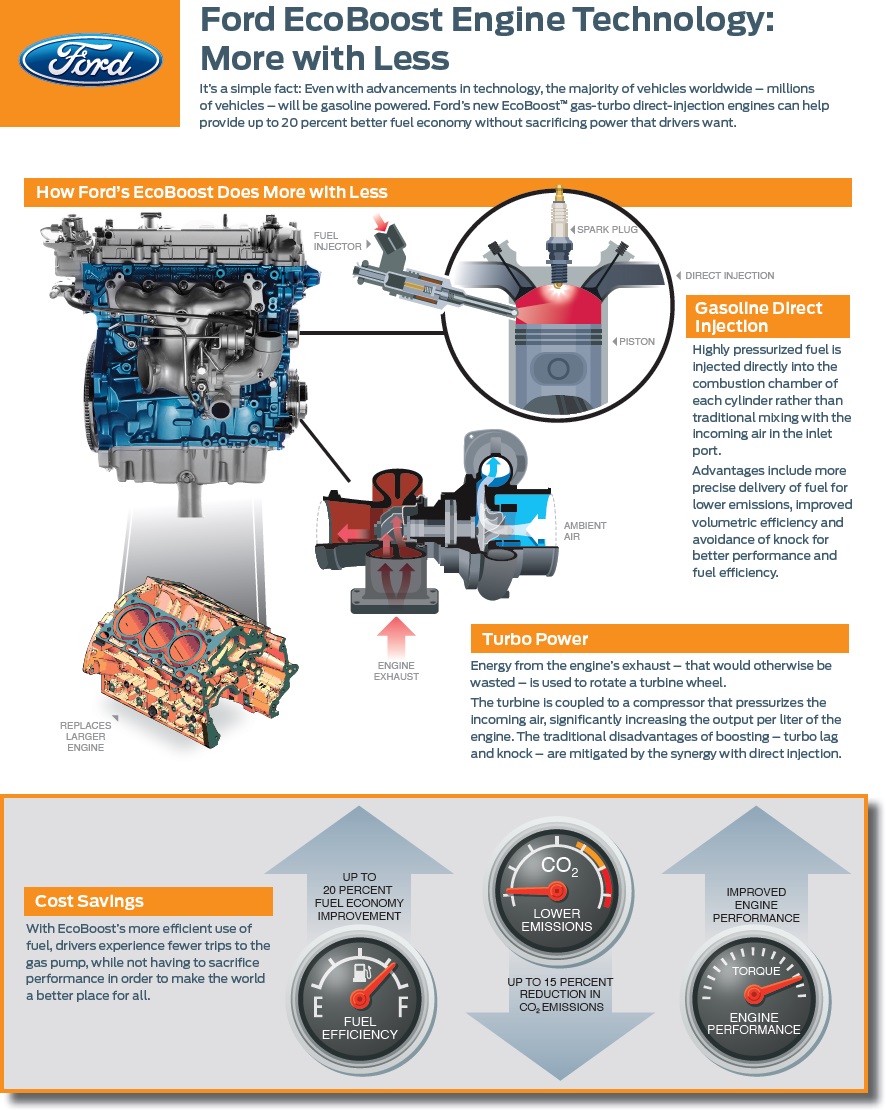 Consumer demand for robust in-vehicle connectivity is also on the rise. As the mobile technology and automotive worlds increasingly intersect, Ford remains at the forefront of the explosive growth in the connected car market, offering affordable technologies commonly found in more premium vehicles.

The company’s exclusive Ford SYNC® technology, catapulted Ford to the forefront of in-car connectivity. SYNC, developed with Microsoft, is an advanced software platform that provides consumers the convenience and flexibility to bring digital media players and Bluetooth®-enabled mobile phones into their vehicles and operate the devices via voice command. Today, SYNC is available in Malaysia in the recently launched new Ford Fiesta, the all-new Ford Kuga and the all-new Ford Focus.

• SYNC includes many of the same features offered on mobile phones – caller ID, call waiting, conference calling, caller log, contact list and more – all conveniently located on the radio’s display screen.
• When paired with a Bluetooth-capable phone, SYNC can convert text messages and read them aloud. Drivers can choose to reply from any of 20 predefined responses.
• SYNC offers voice-activated, hands-free calling – keeping the drivers hands on the wheel and eyes on the road. Simply by pressing the “Push to Talk” button on the steering wheel and saying the name of the contact, SYNC will automatically connect with the names in the paired mobile phone’s contact list.
• SYNC’s advanced voice recognition technology allows users to browse their music collection on a connected digital music player, mobile phone or USB drive by genre, album, artist or song title, all via simple voice commands.

In other markets, Ford SYNC goes even further with AppLink™ – connecting Ford customers to some of their favourite smartphone applications through simple voice commands.

In 2012, more than 1.9 million vehicles were delivered with smartphone integrated solutions such as Ford SYNC® and SYNC AppLink. Ford estimates that by 2015, there will be more than 14 million on vehicles on the road worldwide equipped with SYNC. An additional 7 million will be equipped with Ford’s SYNC AppLink, According to global mobile analysts and automotive industry forecasts, this number is expected to reach 21 million vehicles by 2018.

Ford is relentless in going further to develop even more vehicle connectivity solutions, including the following technologies and initiatives:

• In September 2013, Ford announced plans to acquire Livio, a Michigan-based software development startup that builds products and software tools to support smartphone and car connectivity. This move is intended to further extend Ford’s ability to meet consumers’ growing demand for safe, seamless, in-vehicle access to the electronic content they love.
• In August 2013, Ford announced the beginning of a three-year research project with St. Petersburg Polytechnic University in Russia to analyse space-based robotic communications systems to aid in mobility solutions for vehicles. Developing connected vehicle communications has the potential to reduce traffic accidents and ease congestion by enabling vehicles to communicate with each other, as well as communicate with infrastructure such as traffic lights, buildings, the cloud and other systems to detect and respond to imminent collision or hazard warnings.
• At the January 2013 International Consumer Electronics Show, Ford announced the launch of its Ford Developer Programme, the industry’s first open mobile app developer programme enabling software developers to integrate their apps with SYNC AppLink.
• In 2011, Ford researchers unveiled one of the first privately funded “smart intersections” in North America, advancing research into infrastructure-to-vehicle technology intended to prevent accidents and reduce congestion. The smart intersection communicates with specially equipped vehicles to warn drivers of potentially dangerous traffic situations. The intersection is outfitted with technology that can monitor traffic signal status, GPS data and digital maps to assess potential hazards and communicate that information to vehicles.

Ford is also taking the next step with industry-leading smart and safe features, including its exclusive Curve Control technology. Launched in 2011, this pioneering technology is designed to help drivers maintain control of their vehicle when taking a curve too quickly. When Curve Control senses this situation, it applies four-wheel smart braking to reduce vehicle speed by up to 16 km/h in approximately one second, helping drivers stay safely on track and in control. Curve Control comes standard on the recently-launched all-new Ford Kuga, now available here in Malaysia.

Recent recognitions of Ford’s leadership in the smart technology field include:

• Ford was the only full-line automaker named to Fast Company Magazine’s “50 Most Innovative Companies 2013,” recognised for “turning a car company into a software leader.” Fast Company highlighted recent Ford high-tech achievements, including the opening of its Silicon Valley Lab in June 2012 where Ford engineers collaborate with some of the best and brightest minds in the tech sector.
• Sheryl Connelly, Ford’s global head of trends and futuring, is the only member of the automotive industry named to Fast Company Magazine’s “Top 100 Most Creative People in Business” for 2013. She is also the first woman from the auto industry to make the annual list. Connelly explores trends up to 20 years in the future, collaborating with product development, design, sustainability and other Ford business groups, using consumer trends research to help craft viable business solutions for changing customer needs.
• At this year’s prestigious 2013 International Consumer Electronics Show, the all-new Ford Fusion Energi was Connected World Magazine’s Connected Car of the Year 2013, recognised as offering the most complete advanced driver assist technologies of any midsize car.

• Ford engineers are developing a highly flexible, first-of-its-kind, patented technology to rapidly form sheet-metal parts. Known as Ford Freeform Fabrication, this technology will lower costs and speed delivery times for stamping molds – within three business days compared to up to six months for prototypes made using conventional methods. These molds can be used in prototyping, concept vehicles, vehicle personalization and other applications including aerospace, defence, transportation and appliance industries.
• Ford is also expanding its 3D-printing capabilities to create multiple versions of one party at a time, delivering prototype parts to engineers for testing in days rather than months, greatly reducing time to market. The recently-launched new Fiesta, upcoming all-new Ford Transit Van and other Ford vehicles use this technology to develop parts.
• Ford goes further as well by investing in robotic innovations to improve vehicle quality and production efficiencies, such as Ford’s industry-first dirt detection system that uses robotic vision to create a digital model of each vehicle in final assembly to analyse paint and surface imperfections in comparison with a perfect model. The result has been significantly improved surface quality on Ford vehicles and more time for operators on the assembly line to address complex issues.
• Ford has also implemented a virtual factory, helping the company improve quality and cut costs in real-world manufacturing facilities by creating and analysing computer simulations of the complete vehicle production process.

“Technologies such as 3D printing, robotics and virtual manufacturing may live in research but have real-world applications for tomorrow and beyond,” said Paul Mascarenas, chief technical officer and vice president, Ford Research and Innovation. “We use Henry Ford’s spirit of innovation as a benchmark for bringing new technologies into the manufacturing process.”

From connectivity solutions to safety technology and modern manufacturing capabilities, the company is continuously reaching for new ideas, new inspiration and new ways to push its industry further with game-changing technologies.