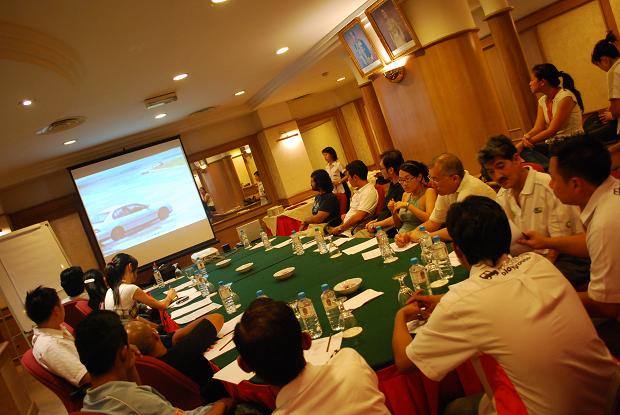 The date: 18 July 2009. The place: Stadium Shah Alam. The occasion: the 1st Autoworld Safety & Defensive Driving Course. One faithful moment. I was set to perform the skid test, one of several practical drills put together by Mr Kenvin Low and his instructors from the Asia Advanced Driving Academy (AADA). The task was to drive over a slippery patch, and as we corner on the throttle, the instructor would pull the handbrake and send the rear end of the car skidding into oversteer. Our challenge was to catch the slide on the counter steer, and guide the car through a designated exit gate. Before getting us started, the instructors told us, “Whatever you do, keep looking at where you want to go, and you will be there,” before adding, “Don’t look elsewhere!”

When my turn came, I did as I was told. As the instructor pulled my handbrake, the tail of my sponsored Honda City began to overtake its front. My eyes were locked on the ‘exit’ gate as I counter-steered to bring the car back in line. I was keeping it nice and neat. Then suddenly, the rear swung the other way, catching me completely off guard. In the panic, I backed off the throttle, and the car skidded to a stop, facing not exactly the right direction. Repeated exercises failed to produce improved results. Not a very acceptable performance for a motoring writer.

My initial attempts at the earlier slalom and braking exercises did not fare too well either, but I was able to improve my performance on both after several tries. Getting the skid right completely escaped me on the day. Suffice to say, the standard of my driving was not exactly up to scratch. Improvement was imperative. Practice was needed, but where? My prayers were answered when Kenvin invited me for another go at the recent Defensive Driving Course organized by AADA. It was a fantastic opportunity for me to simultaneously hone my driving and photography skills.

Those who had attended the Autoworld DDC would have been instantly familiar with the day’s drill, as the syllabus has remained unchanged. It was theory in the morning at the Kelab Golf Sultan Abdul Aziz Shah before we adjourned to the Stadium Shah Alam car park for the practical runs – which, as before, consisted of a slalom course, braking test and skid test. I was familiar with all these exercises in theory, but practice was still needed.

It all seemed so easy in theory.

The fifteen participants of the course were of varying backgrounds. A female drifter, students, middle-aged men, and a young couple. Most used their own vehicles, but for those who didn’t, a loaned car was available.The cars assembled included a Golf GTI, three Volvos (a 740, an S40 and an S60), a Perdana V6 and a Vios.

Raising our eyebrows were a W140 Mercedes-Benz S320 brought by the aforementioned female drifter (she almost brought her Nissan Frontier instead!) and a heavily modified Nissan Skyline R33. Completing the line up were a pair of Waja Campros. One was supplied by Kenvin himself, while the other, a manual transmission model, was my daily ride. 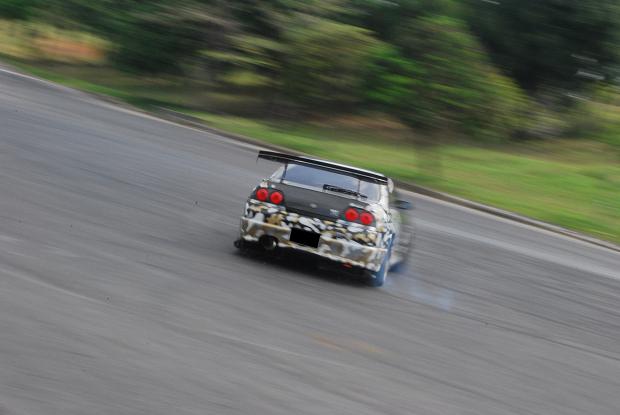 The Waja may be a car of many flaws, but for the exercises thrown at us by Kenvin, it was perfect. I coped with the exercises far better this time. As before, the practical session kicked off with the slalom course. At the Autoworld DDC, having to do this course while practicing the ‘push-pull’ steering technique proved remarkably awkward.

This time round, after integrating it into my daily driving for the past one month, the move became very natural. Using second gear and moderate throttle, the car changed direction almost intuitively without any hints of understeer. So far, so easy. The slalom was a good warm-up. 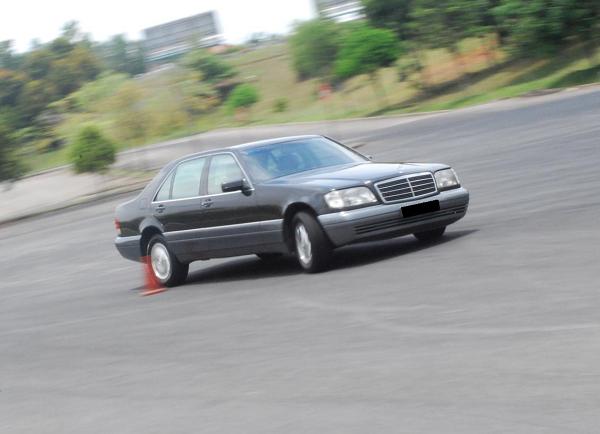 The W140 takes on the slalom course.

Next was the wet braking test where we had to brake and steer clear of an obstacle driving at speed over a slippery patch and then stop inside a designated box. My car had ABS, so steering clear of the obstacle was no issue. I avoided it on every try. There was a twist though. Everyone else did the test at 60kph. Kenvin challenged me do it at 80. Although I managed to avoid hitting the obstacle, I drove straight through the designated box every time rather than stopping inside it. 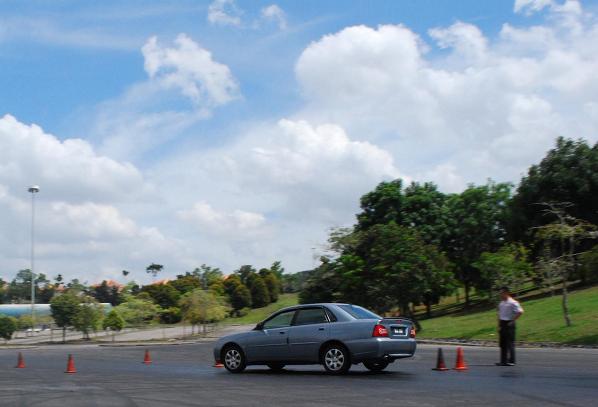 ABS or not, doing the braking test at 80kph was not easy!

Watching the other participants attempting the test provided some moments of laughter, especially when they tried Kenvin’s non-ABS equipped Waja and also the ABS-disabled PV6. These participants needed to use cadence braking (pumping the brakes in our-speak) to simulate the effects of ABS and allow the car to be steered to safety. Those who neglected to pump their brakes drove straight through the obstacle cone. 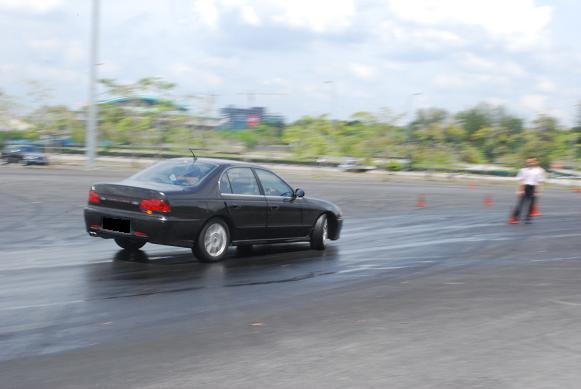 Kenvin not worried about putting himself on the line.

The highlight came during the skid test. It is the most enjoyable exercise if you get it right, but if you didn’t, as I found out at the Autoworld DDC, it can be terribly frustrating. We saw the Mercedes having a few problems here. The combination of its sheer mass, lack of excess power, and abundance of electronics made the task of getting the rear to slide very tricky, let alone having a chance to recover it. Similarly, the two newer Volvos appeared almost just as unslideable as they accomplished the tasks without any hint of fuss or drama. 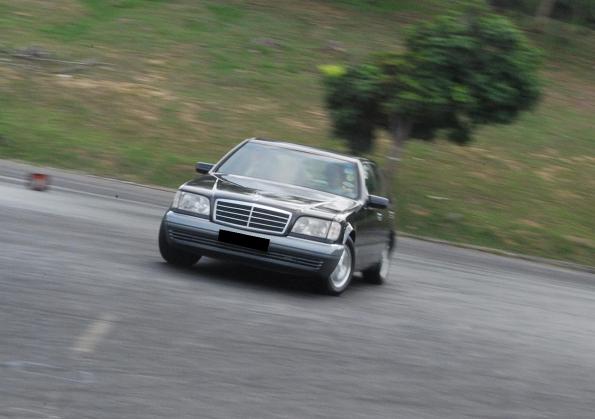 Merc was a little too civilized for these exercises.

After seeing a few of the participants going at it, I roped one of the instructors into my car to have a go. The drill was same as before, drive through the ‘entrance’ gate, corner left on the throttle, and wait for him to pull the handbrake. It was a short run-up to the gate, by which I have only upshifted to second gear. The handbrake pull came without warning, as it should, and I instantly felt the rear losing grip completely. Cue the counter-steering, as I kept my vision locked on the ‘exit’ gate. It may sound counter-intuitive, but at no point must you dab the brakes. Instead, your foot must continue modulating the throttle to supply enough traction for the tyres to keep your car on track. 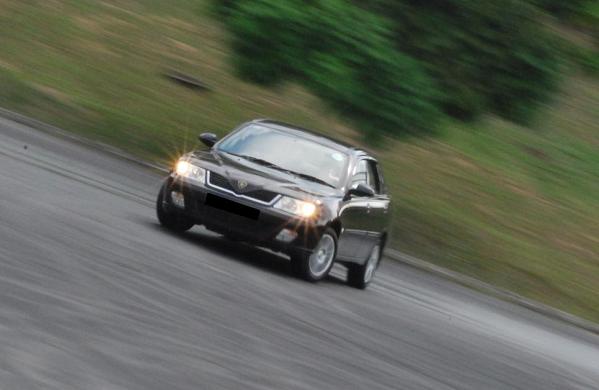 My car was going very sideways, but it was heading the right direction. Unlike in the City the last time around, I was able to sense exactly when the rear was going to swing the other way and successfully catch the second slide, straightening it just before crossing the exit gate. In this exercise, I found the ‘push-pull’ method of steering to be indeed the most effective when I needed to rapidly steer in one direction then the other. Getting this exercise right was ‘oh-so-satisfyingly’ addictive, I went at it again and again. 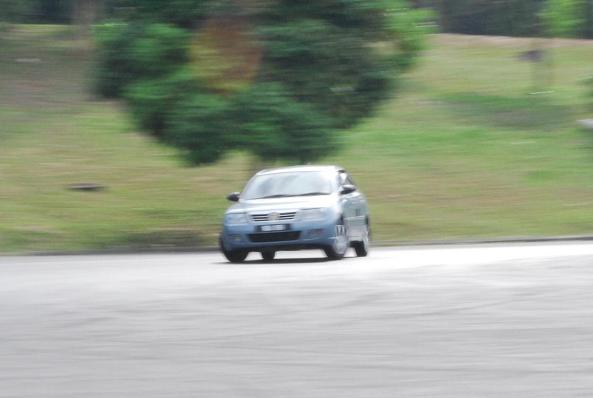 The feeling of having the car momentarily lose control, and then successfully wrestling it back and taming it brings about a very inexplicable and intangible sense of satisfaction. The adrenaline rush as the car went sideways probably served to amplify the grin factors, but hey, nobody’s complaining. It was simply great and wicked fun, all conducted in a safe environment. Indeed, safety is the underlying theme to this defensive driving course. The objective of you doing the slalom, slamming the brakes, then sliding left and right is not so that you can use these skills to impress your friends, but rather how you might need to call on them one day to save your own life, as you might one day need to steer clear of animals (or God forbid, children) straying into your path, or to wrest your car back under control from a skid. 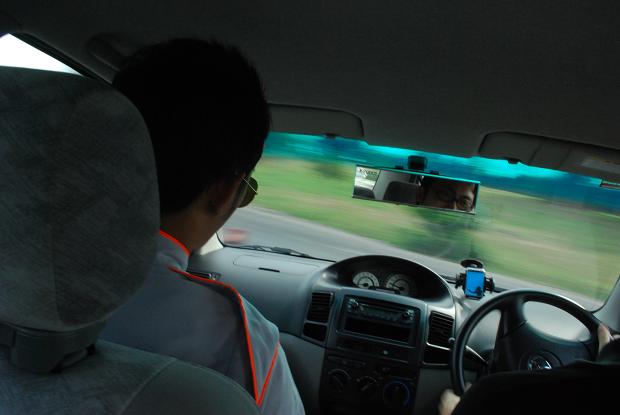 Being conducted in a closed environment, the practical sessions of defensive driving courses enable you to safely explore and expand the limits of your driving skills. Participation in defensive driving courses cost quite a bit (AADA charges RM400), but the satisfaction gained is worth every penny. There are a few organizations, some of them car manufacturers themselves, conducting defensive driving courses in the country at varying prices which I believe you should check out. Alternatively, you can keep your eyes open for the 2nd Autoworld Safety & Defensive Driving Course coming soon at the end of the year!