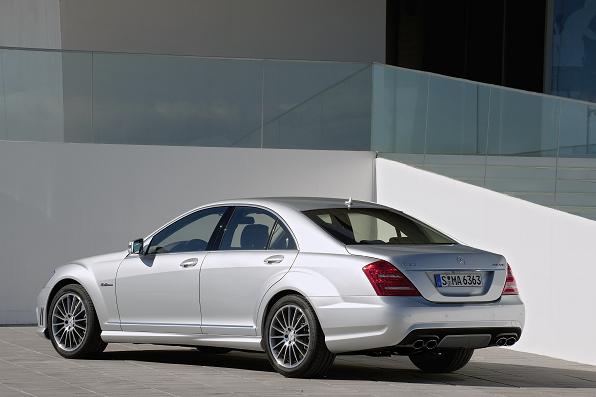 In-line with the mid-generation facelift of the W221 S-class, Mercedes is now introducing the facelifted versions of the mighty duo – the S 63 AMG and S 65 AMG. Little change is made to the already excellent powertrains of both models, with improvements focused primarily on the aesthetics and electronics.

According to Mercedes, both the 6.2-litre V8 of the 63 and the 6.0-litre V12 bi-turbo of the 65 continue to produce unchanged output figures, but now give reduced consumption and CO2 emissions. Paired to these engines are AMG’s SPEEDSHIFT automatic transmissions with DIRECT SELECT manual overriding function. The high-revving V8 is mated to the seven-speed 7G-TRONIC. while the torquey V12 has to make do with only five gears, as its 1000Nm peak torque would, in all probability, rip the 7G-T apart. 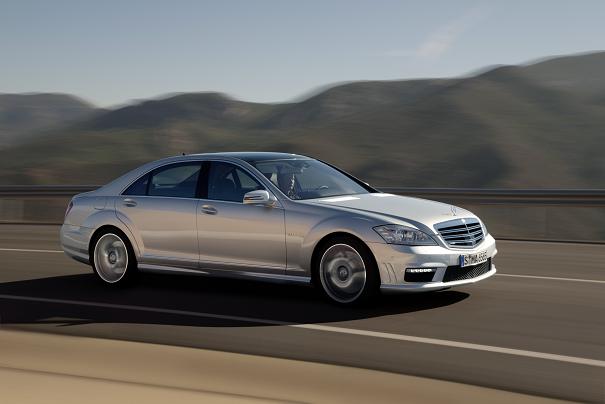 The outward appearance of both the S 63 and S 65 have, naturally, been tweaked to bring them inline with the recently launched (in Europe) facelift of the S-class. As usual, while retaining the basic look and proportions of the standard S, these monsters have also received subtle styling treatment from AMG to hint at the (oh, so massive) potency underneath.

The most obvious change from the outgoing model is at the rear lamp cluster, where Mercedes ditched the three-piece look in favour of a one-piece design. The brake and tail lamps now consists of 52 LEDs lighting up to form a distinctive looking double “C” cluster framing the signal and reverse lights. The LED craze continues up front, with a row of LED daytime running lights (a la Audi) mounted at the top of the air intake vents at the front bumper. 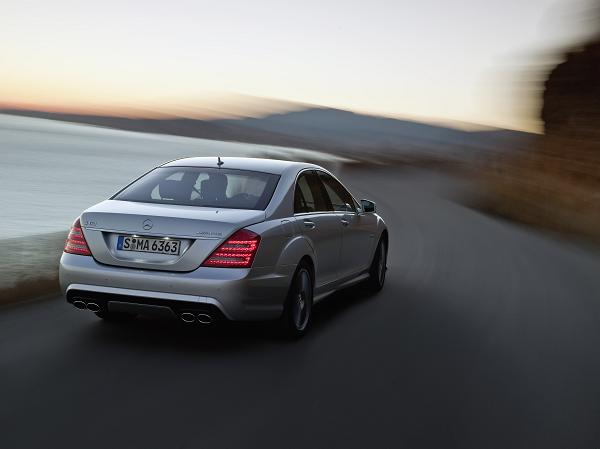 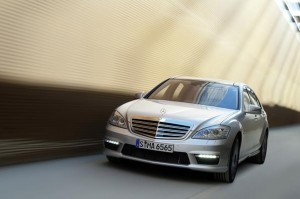 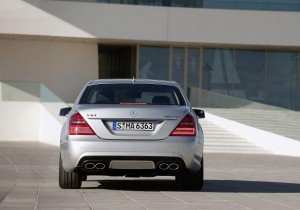 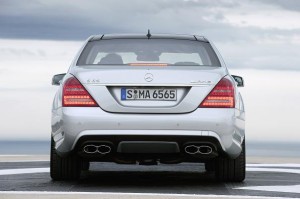 Although both the S 63 and S 65 carry the same basic look, minor styling details, obvious only to the sharpest of eyes, set them apart from each other. Up front, the S 63 gets the radiator grille carried over from the standard S-class, while the S 65 features a bolder design that with a trio of twin-chromed slats taken from the S 600. It would be easier, of course, to tell them apart by the badges instead. The S 63 gets “6.3 AMG” letterings stamped on its front fenders, while on the S 65, it’s a fiercer sounding “V12 Biturbo” 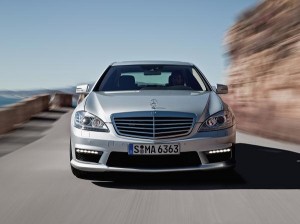 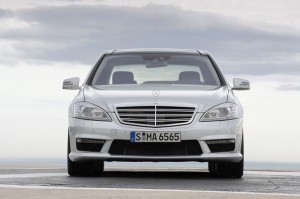 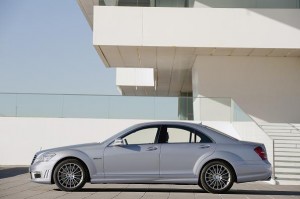 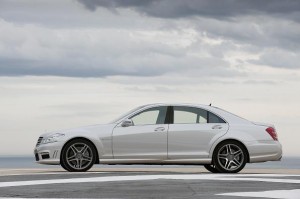 Both the S 63 and S 65 go about delivering their monstrous power in very different manners. Both feature engines that are already very familiar to us.  The S 63 takes the naturally aspirated route in the form of the famous high-revving 6.2-litre V8 engine. The S 65, meanwhile, uses two turbos to force feed its smaller 6.0-litre V12 to deliver a massive tsunami of torque available throughout the rev-range. Both cars are electronically limited to a 250kph top speed and achieve sub-five second times for the century sprint.

The highly-acclaimed 6,208cc M156 motor of the S 63 is already seeing action in almost every AMG-badged Mercedes in the model range. It swept two awards at the recent International Engine of the Year 2009 awards, winning the Best Performance Engine and the Above 4.0-litre categories. A 90-degree short-stroke high-revving V8, the M156’s peak torque of 630Nm comes in at 5,200rpm, with peak power (525hp) arriving 1,600rpm later, with the engine eventually redlining at 7,200rpm. 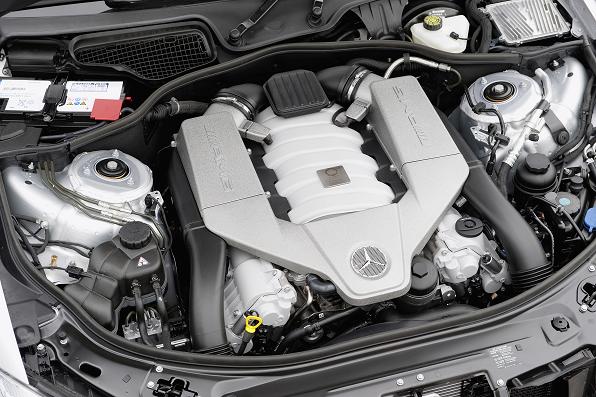 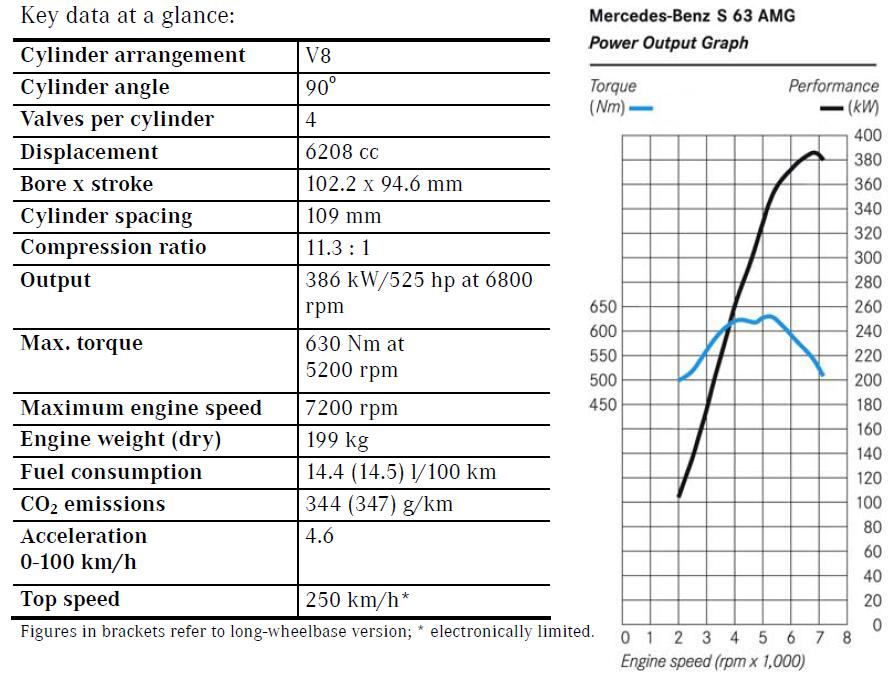 Engine specifications for the S 63 AMG.

In the S 65, the long stroke 60-degree V12 maxes out at only 6,000rpm. But this engine was not built to be a revver. Its main game is and always was going to be torque, dollops of it. Displacing 5,980cc, it features twin turbochargers aided by a powerful air/water intercooler. In its international press release, Mercedes (amusingly, see boxed text below) claims that the intercooler is capable of a “25% reduction in intake temperature at full throttle regardless of the outside temperature”. From there, the turboes take over and ram the air into the twelve combustion chambers at a pressure of 1.5 bar. 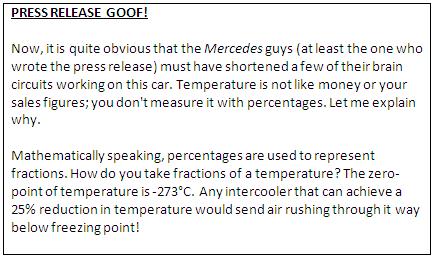 At idling, the S 65’s nuclear powerplant already churns out more torques than an on-song BMW 535d. Bring it up to 1,500rpm, you then get 750Nm. It is capable of producing as much as 1,200Nm, but Merc had to curtail it to 1,000Nm in order not to shatter the already re-inforced five-speed automatic transmission. The engine’s peak power of 612hp also comes in a spread, arriving at 4,800rpm and lasting till 5,100rpm. This is as close to a dose of raw muscle from Germany as you’re going to get. 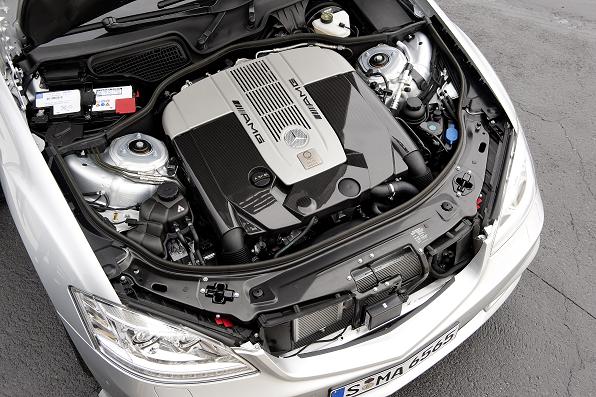 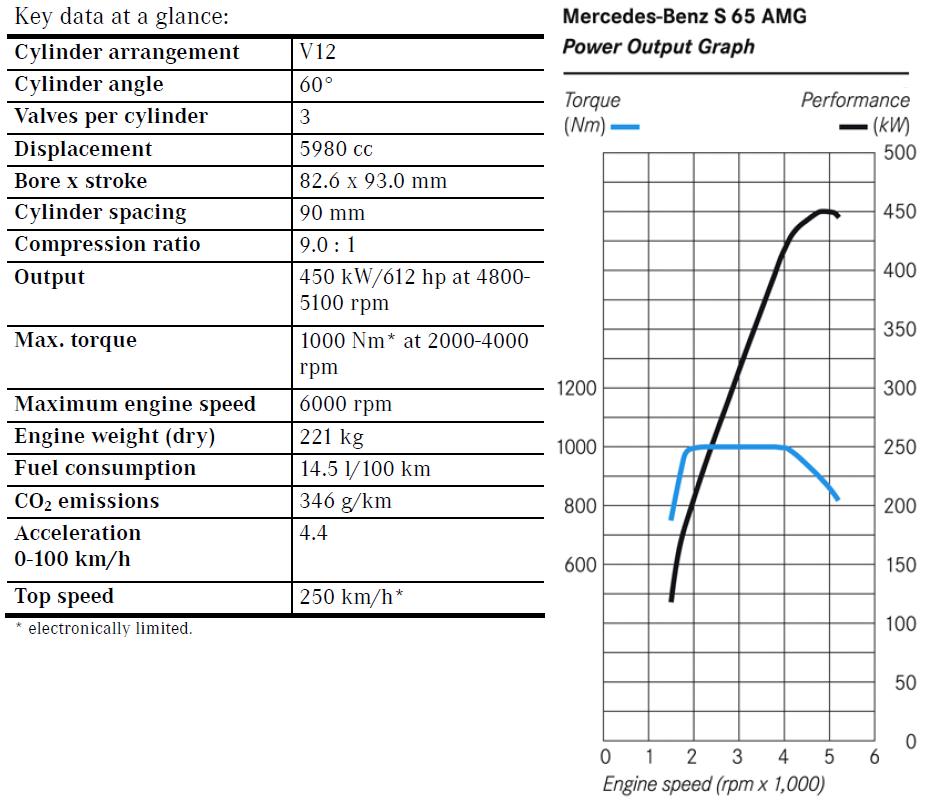 Engine specifications for the S 65.

Both the S 63 and S 65 get AMG SPEEDSHIFT automatic transmissions with steering column mounted levers, dubbed DIRECT SELECT by Mercedes. Three different shifting patterns can be chosen by the driver – Comfort, Sport and Manual. Choosing manual enables the driver to take over the business of shifting gear using the steering wheel shift paddles, completely undisturbed by the electronics, with only an indicator on the dashboard suggesting recommended upshift points. The S 63, with its high-revving V8, gets seven-speeds with its 7G-TRONIC transmission. The high-torque S 65 makes do with two gears less, getting a specially reinforced five-speeder to cope with the mountainous 1,000Nm of torque.

To help cope with the tremendous amounts of power available to the driver, AMG has armed both the S 63 and S 65 with an array of enhancements to the steering, brakes and suspension systems carried over from the standard S-class, if they weren’t already good enough. One of the most impressive systems carried over is the Direct Steer system, which is already standard in the run-of-the-mill S-classes. It is, in a nutshell, a variable ratio and variable assist steering system in one. What does that mean to the driver?

At angles of five degrees either side of the centreline, the steering turns the front wheels using an indirect ratio for greater stability. Turn more than that, the ratios become more direct, with only slight change in the steering angle needed to turn the wheels. In addition, the steering assistance is speed-sensitive, with more assistance coming in at lower speeds. Totally uncharacteristic of Mercedes in recent years, the Direct Steer system is purely mechanical, which they claim, and we absolutely agree on this, brings about “associated benefits in terms of weight, installation space and susceptibility to faults” thanks to the absence of “elaborate actuators and complex sensors”. 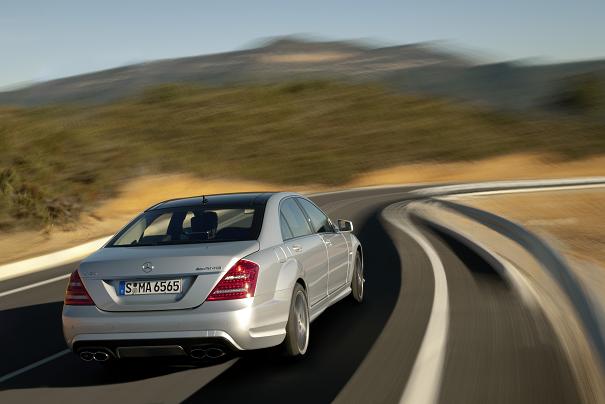 Now, if you get a little too enthusiastic hammering corners in either of these behemoths, the Torque Vectoring Brakes will step in to the rescue on the onset of understeer. Standard on all models of the S-class range, it works simply by braking the inside rear wheel, resulting in “a yaw moment about the vehicle’s vertical axis” that would tug the car back to its intended course. In laymen’s terms, picture a force pulling the car back to keep it from going off in a tangent. 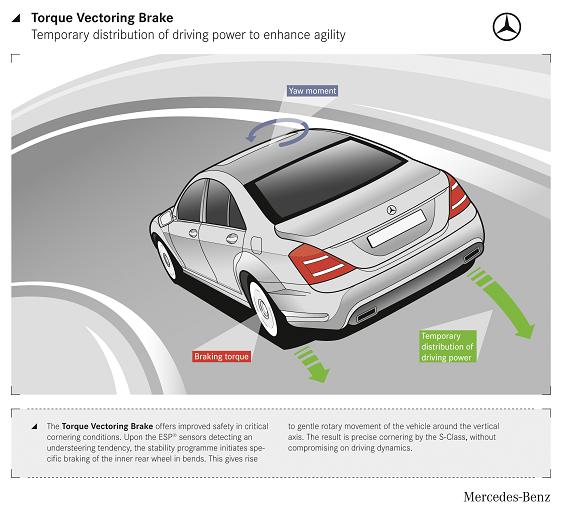 Traveling along straights, the Active Body Control system with crosswind stabilization works in conjunction with the AMG sports suspension to keep the car on course in the face of strong sidewinds. It works by varying the distribution of wheel loads to help offset the crosswind effects. Furthermore, the active suspension system also helps to minimize body roll during corners by varying the flow of oil in the absorbers. It also features a self-leveling function, ensuring identical handling characteristics regardless of the load carried by the vehicle. 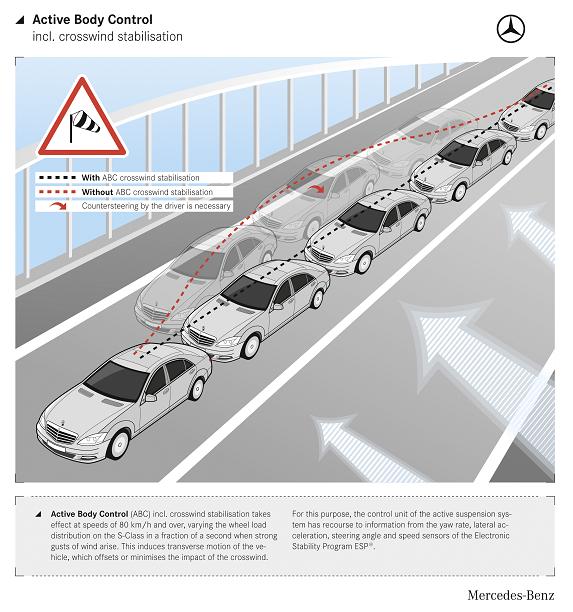 For the anchors, AMG is equipping both the S 63 and S 65 with massive cross-drilled ventilated discs all-round. The discs up front measure 390mm in diameter, and feature double floating calipers, which reduces heat transfer to the brake fluids and have the efficiency of larger fixed calipers. The 365mm discs at the rear, meanwhile, are clamped by a large sliding single frame-type caliper. In wet weather, the braking system self-dries the discs by delivering regular but imperceptible braking impulses to all four wheels to wipe of films of water forming on the brake discs.

When an emergency is detected by the driver suddenly lifting his/her foot off the throttle, the ADAPTIVE BRAKING system primes the brakes, and slam in full force as soon as the pedal is stepped on. At a standstill, the driver can also activate the ADAPTIVE BRAKING system’s HOLD function by stepping on the brake pedal a little further. The brakes would then keep the car stationary until the driver steps on the accelerator again.

Other electronic driving aids include Speed Limit Assist (very useful if you drive either of these on any roads other than the autobahn), ATTENTION ASSIST, Adaptive High Beam Assist, and Night View Assist Plus. Most, if not all, of these electronic systems are already featured in the W212 E-class and have been extensively explored in our preview of the said model.