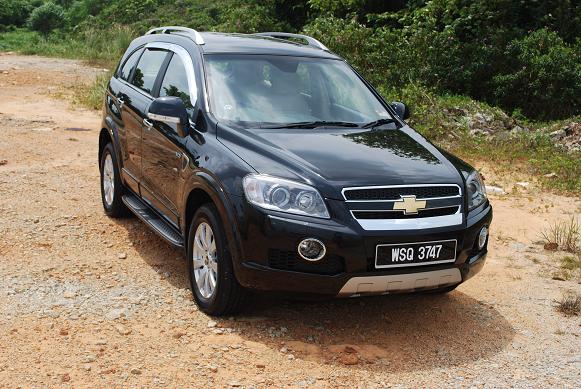 The Captiva has been Chevrolet’s best seller since it arrived at our shores, though it still loses out to more popular choices, namely the Honda CR-V and Nissan X-Trail. Hicom-Chevrolet certainly sees these two as the Captiva’s natural rivals, with their marketing team aiming their crosshairs at these two established Japanese players. The Chevy is an interesting preposition, with a far lengthier specs sheet than both its designated competitors going at the same price.

Recently, Chevrolet can be seen ramping up their promotion of this highly capable SUV, but they are still losing out in terms of badge value. Undeterred, Chevy raises the game by introducing a facelifted version of the Captiva with even more features at the same price. In response, we quickly arranged for a demo car to review Chevy’s prospects.

There are two engine options for the Captiva, 2.0-litre diesel or 2.4-litre petrol, both featuring 5-speed automatic transmission as standard with an on-demand all-wheel drive system optional. Chevrolet markets the diesel version as the higher-end model, offering more toys like auto headlight control, power folding side mirrors, cruise control, hill descent control, traction control, and brake assist, all of which are omitted in the petrol model.

Hicom-Chevrolet loaned us the top spec diesel version, painted in Black Sapphire on the outside, with the interior finished in a two-tone black and beige colour scheme. In the showrooms, our test car would sell at RM161k OTR with insurance. In addition, it also came with the Captiva Sporty Package which would add RM7.7k to the purchase price. It includes a front bumper guard, black chrome bezel headlamps, side step, chrome wind deflector and clear lens taillights. 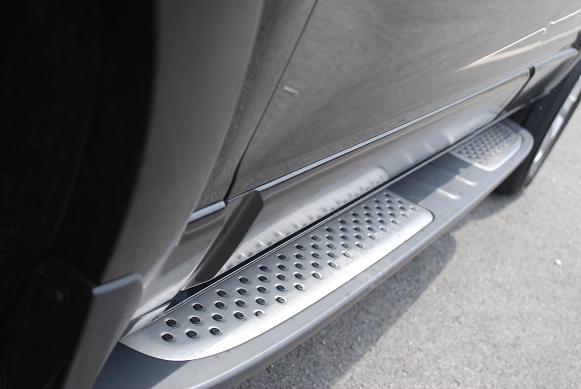 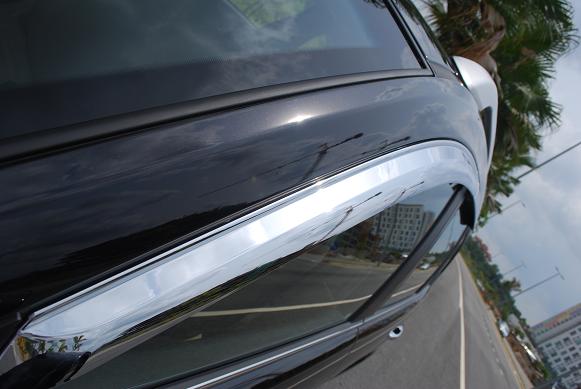 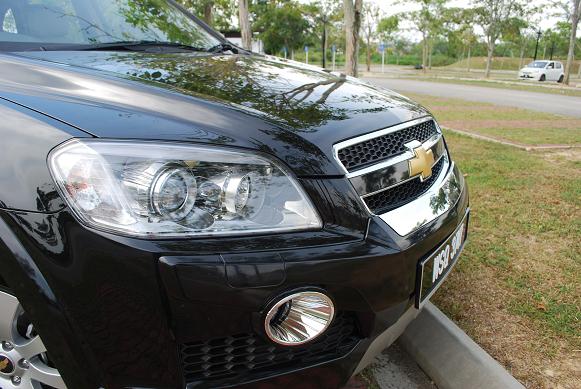 Enhancements of the Captiva Sporty Package.

The front bumper guards and bezel headlamps gives an added edge to the front fascia, but the wind deflectors and tail lights hardly do much to lift the Captiva’s already handsome looks. This is especially true of the clear lens tail lights, which have a very aftermarket look about them. The deflectors, meanwhile, adds too much chrome to the car, giving a ‘bling-bling’ infusion to a classy and elegant shape.

The Captiva did not give me a wonderful first impression when I collected it. As the Chevy PR rep drove the car up the Wisma DRB-Hicom lobby, the diesel clatter of the engine was as loud and unrefined as a bus in Pudu Raya. The doors sounded as if as they were made by separate manufacturers. While the ones in front close with a solid and convincing thud, those at the rear slam shut with a hollow feel. I was caught a few times believing I did not close the door properly. Initially, things didn’t get much better inside. The dashboard mounted digital clock looks woefully out of date, and decidedly out of place. In addition, the four-way adjustable headrests, even after being pushed furthest back sticks out a little too much for comfort. The interior is actually very well put together, but the beige coloured finishing in these 2009 models simply stain too easily. Our test car, less than a month old with under 3,000km on the odo, already has stains all over the lower parts of the dashboard when we received it. Chevrolet should seriously consider reverting back to the black interior of the 2008 cars. Clock looks outdated, headrest sticks too far out, and panels stain too easily.

Fortunately, the bad news ends there. The ergonomics of the dash are rather good. Most of the controls are well-positioned and easy to reach for both driver and passenger. Buttons and stalks had a solid tactile feel about them, with the exception of the gear lever which felt a loose when being slotted into position. There were also plenty of storage spaces and cubby holes, but surprisingly, there really isn’t a suitable space on the centre console to chuck your mobile phone. The best solution I came up with was to put it in the slot under the multifunction display with the cover open. Controls are well laid-out. Surprisingly, engine can be switched off with gear lever at neutral.

A comment is reserved for the GPS unit supplied by Gophers, retrofitted into the Captivas by HICOM-Chevrolet after they come in from Thailand. Because it is a retrofit, the GPS, a detachable and portable unit, runs on power drawn from the cigarette lighter. Our test car came with the power cable plugged into the lighter and the cable running under the dashboard and emerging from the A-pillar, with the GPS unit cradle mounted on the windscreen alongside the A-pillar as well.

While this is a neat solution to obviate the unsightly view the power cord dangling around the dashboard, it is not the most user-friendly position, as it makes it impossible for the driver to call on the passenger’s help to operate the GPS. A better solution is to find someway to mount the GPS unit in the middle. The rear seats are a strong point of the Captiva’s interior, allowing for switching of multiple configurations quickly and painlessly. The mechanism slots solidly at the end points, yet disengage easily. Many such folding mechanisms are either flimsy, or too stiff, the ones in the Captiva combine solidity with user-friendliness. For most of our journey, we had the Captiva configured as a five seater, with the third row function as a luggage compartment. Our test car came without the optional luggage shade, which we feel is one accessory worth ticking for, to keep your valuables out of plain sight. Luggage shade definitely an option you should tick.

When viewing the car at the showroom, some of you might get turned off by the (admittedly very) truck-like clatter of the diesel engine and scrap the idea of a test drive. You would be making a mistake, for the 1,991cc four-cylinder variable geometry turbodiesel is an absolute gem of a powerplant on the highways. Figures from Chevrolet’s specs sheet claims peak power of 148hp at 4,000rpm and peak torque of 320Nm at 2,000rpm. 2.0-litre turbodiesel idles like a truck, but becomes civilized on the highways.

A five-speed automatic transmission and an electronic on-demand all-wheel drive system completes the setup of a powertrain capable of breaching the national speed limit with only 2,100rpm registering on the tacho. A test drive which excludes a clear run on the highways will not do this engine justice. Folks accustomed to the instant on-demand throttle response of Japanese cars will find this engine sluggish, but it most definitely is not. Its acceleration is not likely to snap your neck, but don’t be fooled. The wave of torque coming from the engine comes so smoothly and seamlessly, you would easily find your speedo deep in the triple digit zone. It’s not rev-happy engine, but it is certainly very very torquey.

A point to note, which was highlighted to me by the Captivians, whom we followed to Penang recently, was that our test car was already spewing white smoke whenever we accelerated hard. Some of the Captivians also claimed that such occasions are reduced when pumping from Esso or Mobil, though we could not ascertain any improvement after switching to Esso on our second tank of diesel. On the consumption front, we recorded an overall figure of 10.4 litres/100km on a journey which was mostly on the highways, but had some urban and up the hill drivings thrown in.

The five-speed auto comes with Tiptronic manual override, but you’re not likely to need it for normal daily driving. It was, however, useful when we took on the twisted roads at Balik Pulau. Indeed, the Captiva acquainted itself well with the roads on the undeveloped side of Penang island. With the GPS activated and the transmission in manual mode, we were able to anticipate up coming curves and prepare to downshift for additional traction, almost negating the need for even braking at all but the sharpest corners.

We were impressed by the Captiva’s composure at corners, as it responded astonishingly well to direction changes. However, flip side to this was a rather busy ride. While it doesn’t crash through bumps or potholes, the suspension telegraphs almost every imperfection and undulation of the road surface to the cabin. We were given massage chair treatment on certain stretches of the North-South Highway.

Most of the so-called SUVs these days have the looks of SUVs, but not the capability. This cannot be said for the Captiva. Although it’s no Land Rover, it’s four-wheel drivetrain is still very capable. It climbed the 40 degree slopes of Bukit Genting without so much as a hint of drama. On the way down, the Hill Descent Control (HDC) system kept the Captiva’s descent firmly in check. The HDC does not sound very refined, but it works brilliantly. Show it a slope, press the HDC button, slot into gear, foot off the pedals and watch how the Captiva inch its way down on its own effort safely and effectively. How is it for the passengers?

The Captiva is ideally set up for five passengers, but can be converted to a seven seater by opening the back row of seats. Passengers at the middle row have the option of reclining their seats by an additional 10 degrees without much compromise on the third row’s leg room. The middle row seat backs split-fold in a 60:40 pattern, and has a centre armrest with a small storage compartment inside.

If the need to carry 7 people arises, the rear can sit two adults in reasonable comfort. There is a slight compromise in legroom, but the headroom is as good as the rear most full-sized sedans. However, because the rear windows are rather small, claustrophobics should remain up front. On our return trip from Penang, we had one person sitting on each row. Much to our surprise, the one sitting at the back had little complaints of discomfort. In fact the driver and rear-most passenger was able to engage in an extended chatter, demonstrating the excellent sound-proofing of the Captiva. Gathering my thoughts from the back seat.

At highway speeds, intrusions of noise, as much as we can make out, were limited to wind-noise, of which we suspect the chrome deflectors  are the main culprits. Otherwise, we were able to engage in conversation and listen to music from the audio unit without too much trouble.

The Captiva’s model range starts with the RM143k 2.4L FWD petrol, but we believe that’s the entry level version just to attract the attention of those looking at the RM147k CR-V or the RM145k X-Trail 2.5. The one to really have, is the one we tested here, the RM161k 2.0L AWD diesel, though you may wish to forgo the Sporty Package that came with it. Instead, we would suggest that you tick the option boxes for the luggage shade and the convenience netting, which would be useful to keep items from falling off when you need to keep the tailgate open.

We thoroughly enjoyed our time with the Captiva and we liked it a lot. It looks like an urban-only SUV, but Chevy has actually taken the trouble to arm it with a proper 4WD system. The diesel engine, despite its truck-like clatter is an absolute gem while cruising. To be honest, we expected a very ordinary drive from the Captiva. We got a pleasant surprise.

Verdict: An urban SUV with a properly good four-wheel drive system. It’s a lot more capable than it appears.

Discuss about the Chevrolet Captiva in our forum here.