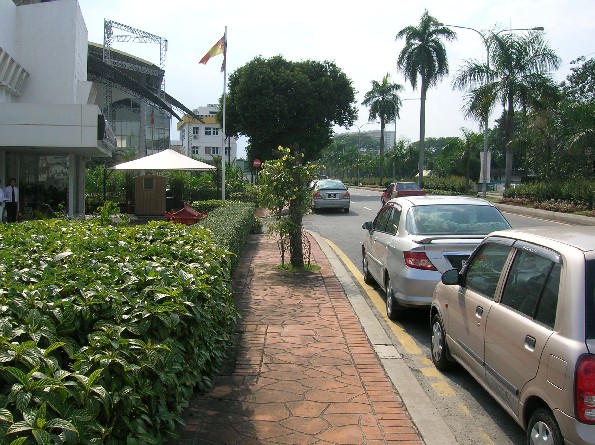 With all the hoo-haa surrounding the City’s launch on 18 Dec, the Honda showrooms all over the country braced themselves for what was going to be an extremely packed weekend, as car buffs and buyers flock to check the new car out. Traveling in disguise, I headed to the premises of Tenaga Setia Resources Sdn Bhd, better known as the ‘Honda Jalan 222 showroom’.

It is one of the more famous navigational landmarks around Petaling Jaya, and being prominently located right alongside one of the busiest roads of the city. As such, it’s one of the first Honda showrooms to cross people’s minds. This, together with the limited amount of space in and around its premises leads to cars of visitors parked by the road side becoming traffic hazards.

“You turn at Jalan 222, and then you see the Honda showroom there, bla bla bla…”

I arrived at the showroom at 3:30pm on Sunday, and it still had a very healthy crowd. There were two display cars in the showroom, both being the Grade S variant. It was not the smartest setup, as this deprived visitors of the opportunity to compare both spec variants live. As a result, the salespeople were seen escorting people outside to view the Grade E test car between test drives. The test car was also decked in the Modulo bodykit and sport rims, that would add over RM7k to the retail price – think properly before ticking these options! 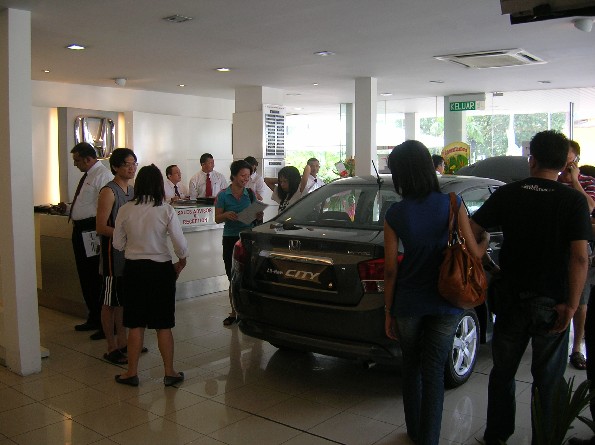 Plenty of visitors even at 3:30pm. Had to wait for over an hour for my test drive. 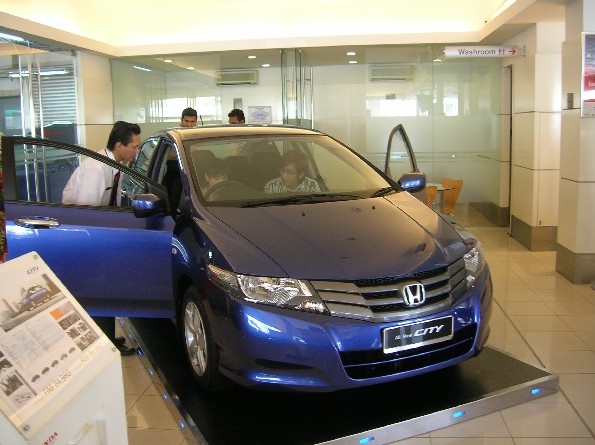 Only Grade S City on display. 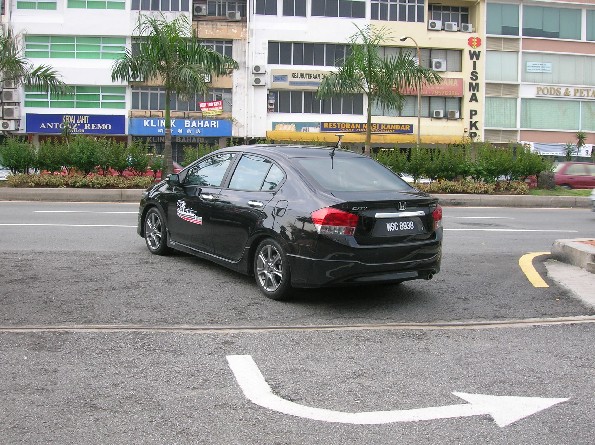 A customer gets ready to take the City for a spin.

Due to the sheer number of customers present, it was over an hour before I got a chance to take the car out for a quick spin. This gave me plenty of time to examine the car in much closer detail, observe the actions of other visitors and also put some of the salespeople to test with their product knowledge.

Having pored through the entire press and technical release kit I picked up from the launch, I also have a reasonable degree of familiarity with the City’s features and technical bits. However, most people (me included) still have no idea of what the gear ratios are, as this piece of information was not available anywhere in the sales catalogs or press kits.

I am not looking for accuracy of each ratio to four decimal places, but I was curious whether the fourth gear was a 1.000 or an overdrive ratio. When quizzed about this, the salesperson I asked told me that there was ‘no overdrive, only got paddle shift.’ Well, I saw no point proceeding further, and I was none the wiser.

While the salespeople were not expecting to face someone secretly armed with info from Honda’s press release, they seemed more than ready to face the rest of the masses, as I saw all of them talking customers into nods. How many of those nods translated into bookings, only they would know, but we could see the Malaysian car inspection culture at its meticulous best – anything that can move was tested to its full range of motion. Every panel was felt to its entire length. The doors, and the boot were opened and closed more times in that one day than what most cars get in a year. 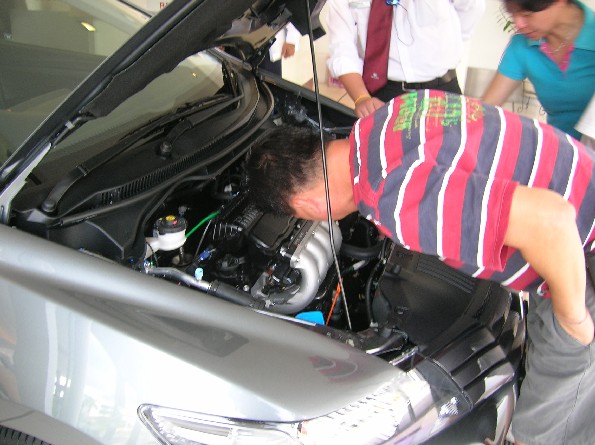 “Engine powerful or not? Save petrol or not?”

With the brighter lighting in the showroom compared to during the launch at Mandarin Oriental, I was able to get a better look at some of the smaller things in the car. The gadget-happy folks will be glad to know that their iPODs will dock with the audio units of both variants. And, as highlighted in the brochures, there were plenty of storage spaces for small objects, though the centre console box is shockingly tiny, being definitely smaller than even those found in a Wira. 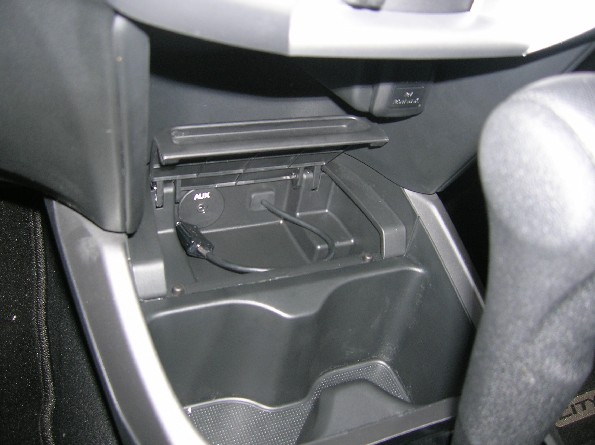 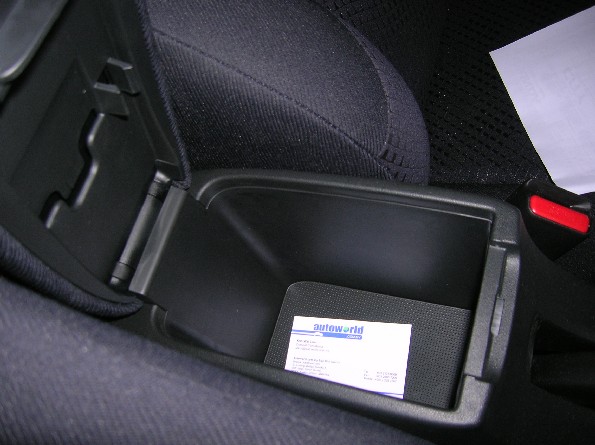 I had a bigger centre console box in my Wira.

In what was definitely the most shocking omission from a car’s spec sheet of all time, good old UMW Toyota actually specified the Vios J without intermittent wipers. Thankfully, Honda did not go down that route in the cost-cutting stakes, and kindly included intermittent wipers as standard. However, with the Grade S, you don’t get variable speed adjustment, and you have a stalk that so obviously blanked out that feature. 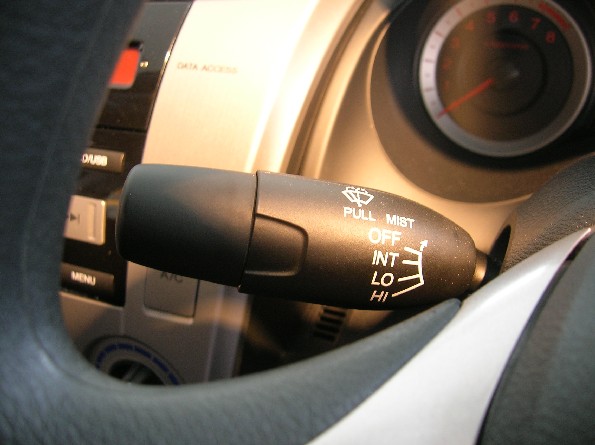 You at least get intermittent wipers, but no variable speed though.

Fortunately, for the rest of the car, there didn’t appear to be many obvious cost-cutting measures that can be deemed unreasonable at this part of the market. However, the rear shelf panel does appear to be rather cheap being made of a rough grade of hard plastic, and for the Grade S, there was just empty space which made me wonder how much would the underseat tray specified for the Grade E variant have cost.

Honda claimed that they have shifted the pedals of the new City 15mm to the right from the outgoing one, though I am not sure why they even bothered. The reason for this shift was to accomodate a footrest for the left foot, but having did all the hardwork redesigning the geometry of the linkages, all Honda did was slap a rubber piece which almost blends into the floor. It really didn’t feel like it was even there. 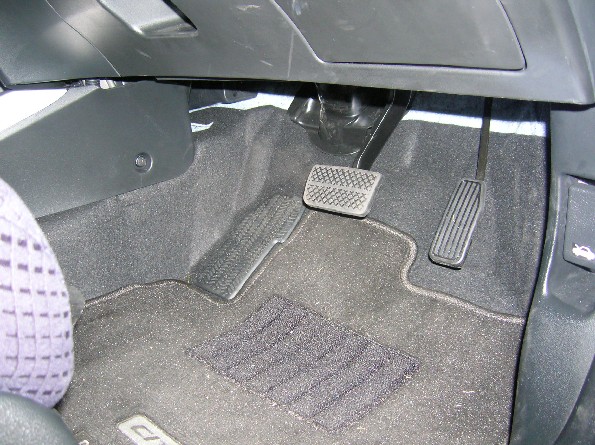 You call that a footrest?

For the rest of the interior, I have few complaints, though it seems that the rear headroom has been reduced, with my head now just touching the roof when sitting upright. Reduced practicality aside, this is still a well-designed and well-built interior – definitely superior in quality and equipment compared to the Toyota Vios even in the RM89k 1.5S trim.

In case you didn’t know, the new City’s bootspace increased from the outgoing model by a total of six litres, bringing it to 506 litres of bootspace. Access to those 506 litres is facilitated by opening a bootlid that has an inverted Y-shape shutline, and a C-shaped type hinge. In order to avert interference between the bootlid and taillights when opening, the geometry of the bootlid’s opening motion was engineered to come slightly outwards before going up. The C-shaped hinges also do not intrude too much into the bootspace, which is a problem I trust Proton Waja owners will definitely be familiar with. 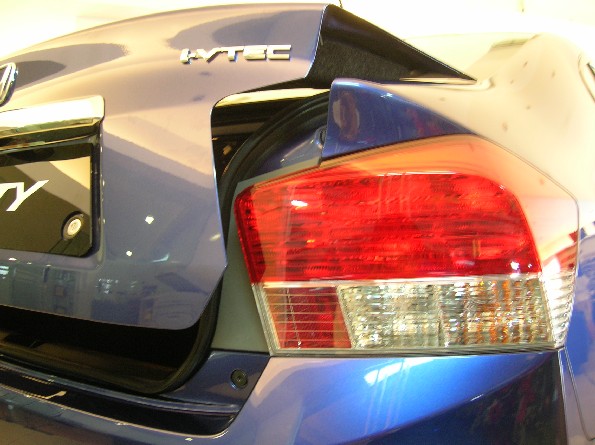 Finally, time to hit the road. As I reversed the car out of the parking spot, and maneuvered to exit the showroom premises, I immediately noticed that the steering is weightier and had more feel than the previous City. Thumbs up to Honda for addressing that one. I remember when testing the old City, I almost ‘over-steered’ the car onto the kerb, being not used to the degree of assist from the electric power steering (EPS).

The new 1.5 i-VTEC engine packs sufficient punch when pressed. The engine does roar a bit past 4,000rpm, which might not be to everyone’s taste, though it’s not as gruff as, say, the Waja/Lancer 4G18. The response of the paddle shifts were quick enough under hard acceleration, with only a very minor delay in shifting time. There wasn’t sufficient time to draw a proper conclusion, but the powertrain’s performance is adequate for most city and even PLUS highway driving conditions.

Whether this City is an improvement to the old is a matter of debate. Some argue it is, some argue it isn’t, both for, amazingly, very same reasons. Some like the sportier edge of the new model, others moan the sacrifice of the old model’s renowned practicality. Some think dropping the CVT for a 5A/T is a great idea, while others think the opposite. The outgoing City was more practical, and had a lot of clever and thoughtful ideas. The new one drops a few of these ideas and embraces a more outgoing image – more conventional, yet more aggressive. It’s hardly a better car, though in the eyes of many, it’s probably more likeable.