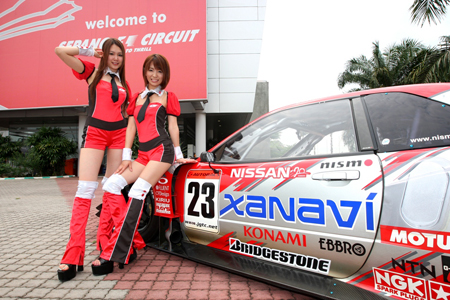 Declaring that the Super GT International Series is the best racing series in the world, visiting GT Queens Ayami Sasaki and Kotomi Kurosawa say that they are enjoying every moment of their association with the series and are very excited with the upcoming Malaysian round at Sepang Circuit from June 20 to 22.

As the official GT Queens for the 2008 Super GT International Series Malaysia, Ayami and Kotomi, who prefer to be called Amie and Tomie, are ambassadors and key promoters for the event. And, they would be leading the other GT Queens at the grid presentation on Race Day.

“Super GT is very good. It’s No. 1 (in the world). We love Super GT … we love to become GT Queens,” says the 20-year old who also works as a part-time model and dancer in Tokyo and occasionally follows the Formula One World Championship.

Despite her limited English vocabularies, Amie was crystal clear in explaining herself why she loves the series. “I like racing … I like race cars,” Amie said expressively as she held up both her hands; trying to gimmick some driving maneuvers to stress the point.

The introduction of both Amie and Tomie as the official GT Queens were made at the official launch of the 2008 Super GT International Series Malaysia, which was performed by Youth and Sports Minister Datuk Ismail Sabri Yaakob at the ministry in Putrajaya (30 May) today.

Amie said : “Super GT (is) good (because) it got many beautiful cars,” said Amie in clear reference of the massive numbers of participating stylish race cars; featuring all of the world top sports car models from the auto makers of Nissan, Toyota, Honda, Mazda, Subaru, Ford, Ferrari, Lamborghini and Porsche.

“Super GT got good drivers … all famous drivers,” she said, adding she like all the drivers and all the competing teams without any preferences. “I like all of the drivers,” said Amie, who dreams of driving her own Ferrari car.

Since 2002, Sepang hosts an official championship round of the series and the 2008 International Series Malaysia would be Round 4 of a nine-round championship this year. As a championship round, drivers and teams pushed their cars to the limit to secure maximum points in their effort to win the overall crown.

While Amie is impressed with the drivers, Tomie spoke highly of the mechanics and the supporting team crew. “I like the mechanics,” as she gestured some tyre-changing actions during a pitstop.

With the race running up to 300kms and two drivers to a car, activities at the pits especially the driver change and pit-stops added more live and colour to the highly entertaining Super GT International Series.

Having worked with Team Toyota Kraft for three years in 2005, 2006 and 2007, Tomie had understandably picked the No #35 Toyota Lexus SC430 racecar as her favourite with the Scottish Dumbrek as her top driver.

And, having come to Sepang for the past three years, Tomie rated the Malaysian track as No 1 in her list of favourite race tracks; upstaging the likes of Fuji Speedway, Suzuka, Sportsland Sugo, Autopolis and Twin Ring Motegi in Japan.

“Sepang is big and beautiful. I loves coming to Sepang,” said Tomie, who also declared that she would always prefer the sunny and hot Malaysia weather than the cold, chilling air at the Japanese race tracks.

“Hot weather good … makes you active,” said Tomie, adding that the entire Team Toyota Kraft also loved coming to race in Sepang. “They also love Sepang … they like (to) race in Sepang,” added the 25-year old Tomie, who hailed from Nagasaki.